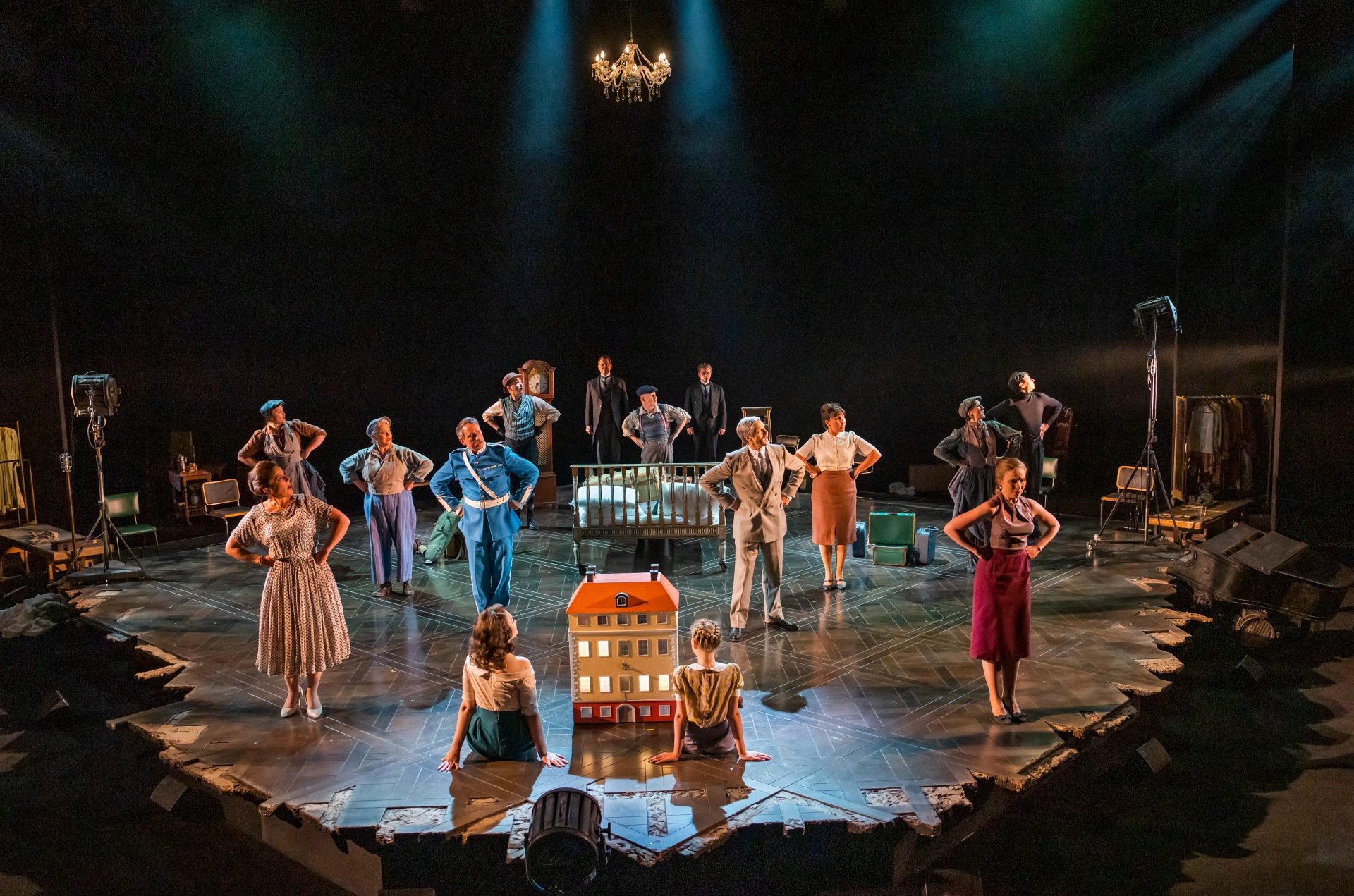 The Orchestra of Opera North – under the baton of Oliver Rundell, immediately whisks the Quarry Theatre back to a Scandinavian scene that is as familiar today in the UK, as it might have been in Gothenburg or Malmo a century ago – namely the gathering together of a disparate group of family and ‘friends’, with conflicting loyalties, beliefs and passions. Add some controlling and manipulative characters, stir well – sit back and observe.

Sondheim’s work, together with the book penned by Hugh Wheeler, takes the 1955 Ingmar Bergman film ‘Smiles of a Summer Night’, as the base for this Kladdkaka. The production, from Director James Brining, has previously been described as ‘whipped cream – with knives’. Quite right.

‍Act 1 introduces the complicated dynamics amongst the characters. Tim Ochala-Greenough, Amy Freston, Gillene Butterfield, Claire Pascoe and Dean Robinson open proceedings and excel as the set-moving quintet observing the shenanigans of their supposed ‘betters’, while seamlessly delivering the flowing ‘Remember’.

Our middle-aged lawyer Fredrik, played by Quirijn de Lang, wrestles with the realities of his new relationship – his marriage to 18-yr-old Anne, (Corinne Cowling) who (thankfully), is yet to complete her checklist of ‘wifely duties’. Sam Marston’s Henrik is the priest-in-training, teenage son of Fredrik – and as you might expect, is in danger of being pulled-apart by his belief in the bible and his passion for his father’s bride. Amy J Payne’s brilliant maid Petra only threatens to add to the wannabe cleric’s angst, with her ‘direct’ approach to gratification.

Ms Desiree Armfeldt (Sandra Piques Eddy) is the glamourous actress (of a certain age), now reduced to plying her trade in provincial theatres. From a lineage of women that understand how men are to be employed, she is still capitalising on her charms when she encounters Fredrik and Anne enjoying a date night at their local playhouse. The audience learns that Fredrik and Desiree have form…just how much form, becomes as clear as the waters of Lake Asnan, in the second act.

The inevitability of Fredrik’s return to see Desiree is as predictable as the behaviour of her regular military ‘friend’, Count Carl-Magnus Malcolm, (Christopher Nairne) when he arrives to discover the pair in an ‘informal’ state. Jealousy, resignation and a Mexican Stand-Off follow, as our Peacock-imitating Dragoon deploys his wife – yes his wife – to frustrate the enemy.

Madeleine Boyd’s vision for the set was (as you come to expect from Leeds Playhouse and Opera North) a masterclass in immersing an audience in multiple very different locations. The garden and fountain of act two was not only a delight, but provided the perfect canvas for some welcome comic moments from the actors. Chris Davey’s lighting expertise also deserves big applause.

I’m certain everyone in the Quarry Theatre anticipated a show-stopping moment from ‘Send In The Clowns’ and when it came, it was rather muted – but arguably struck the right tone for a production that on one level is about the well-trod path of a farcical country-house weekend – but on another is actually flagging-up something we all need to strive to get right: Relationships.

‘Isn’t it rich? Are we a pair?’ The pairing of Leeds Playhouse and Opera North this July will enrich anyone who can get to see the show.

Image Header: The cast of A Little Night Music.