A New Trinity For The North

Grid, Mag and True are on their way with a new direction
Colin Petch.
November 7, 2022 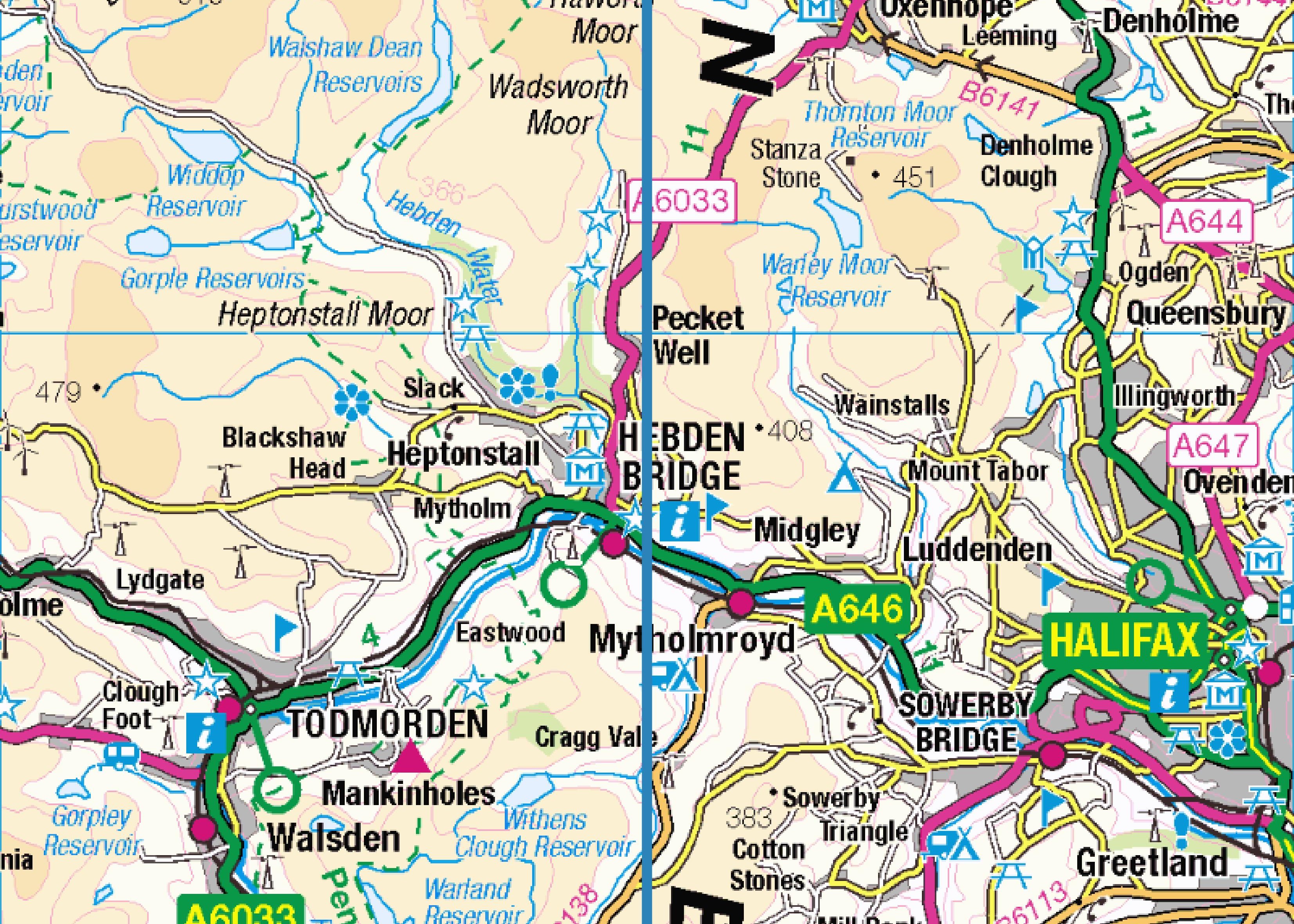 It’s been difficult to miss articles and news features this week across the media, talking about ‘Geospatial history being made’. It is an incredibly exciting thing that True North, Magnetic North and Grid North are about to combine at a single point in Great Britain for the first time – and remain together on our island for the next three and a half years, as the point of convergence moves slowly northwards.

We’ve been asked why we’re not talking about this utterly fantastical geographical happening – given our name – and our love of the North. The answer: we knew it was coming and that everyone from the BBC to the Bournemouth Echo would be faithfully re-presenting the words from the recently issued Ordnance Survey press release. And they have.

So, at Mag North – we’ve enjoyed seeing our colleagues share the news that the changing direction of Magnetic North is now approaching a ’magic line’.

But what’s ‘magic’ about it? Well until the convergence begins to occur at points IN THE NORTH, not too much.

It is true that this unique event first occurs and makes landfall this month at Seacombe Cliff near Langton Matravers in Dorset. The invisible blue line of Grid North clambers up from the beach, just as thousands of Bootnecks have done - after powering away from Hamworthy and Poole Harbour in their fast green boats. Fittingly, for the men of The Globe and Laurel, the Royal Marines Commando Memorial to those killed in action since 1945, sits just along the cliff top and invites us to "Rest awhile and reflect that we who are living can enjoy the beauty of the sea and countryside."

The triple alignment will arrive in Poole by Christmas, [possibly] filling anyone entering Kingland at the Dolphin Shopping Centre, with the sort of Christmas cheer and positivity for the future that usually only comes after several pints of Piddle Brewery’s ‘Slasher’.

The difference between magnetic north and grid north is often referred to as ‘grid magnetic angle’ and it not only varies from place to place, but changes with time. This needs to be taken into account when navigating with a map and compass. (But if you’re using your Sat Nav in the car – you’ll be fine.)

Now, there is a third line about to come into alignment – true north. This is the direction of lines of longitude that all converge at the north pole. (Are you keeping up?)

In 2014, for the first time in Great Britain since the 1660s, magnetic north moved from being to the west of grid north to the east. The change started in the very south-west corner of Britain and will slowly progress across the whole country over the next 12 to 13 years.

If, like me – you’re a geography fan – this next stuff is important. If you’re not: scroll on to the bit about STOCKPORT.

On a map projection like the transverse Mercator projection used for the British National Grid, the longitude lines curve away from the straight grid lines. This is called ‘convergence’. The amount of curvature varies across the grid area, except at one line. A transverse Mercator projection has a “central meridian” line where a chosen longitude aligns with a vertical eastings grid line. For the National Grid this central meridian line is 2°W or 400000m E.

'The British Geological Survey blog', 'This magnetic north blog on the changing direction', as well as this grid magnetic angle calculator have been used to estimate the dates of the triple alignment.

The predictions are likely to change (by a few months only) with the assimilation of new magnetic field observations into the model. This new data will capture the latest magnetic field signals from the geodynamo operating in the Earth’s liquid outer core. Interactions between the flow of the molten iron-rich material in this region and the magnetic field generate electrical currents that, in turn, creates new magnetic flux which sustains the field.

Energy sources for the fluid motions are primarily convection - as the Earth slowly cools down, warmer fluid rises and cooler fluid falls and solidifies onto the solid inner core. This changes the chemical composition of the fluid making it less dense, from which buoyancy forces result. The rotation of the planet also contributes to sustaining the geodynamo.

STOCKPORT: Okay – are you back in the room?

It’s actually 2024 when the fun really starts in the North – and the positive energy is pumped from this unique Northern Line…so stay strong until then okay?

If you’re living in Stockport in early summer 2024, you won’t know why…but one morning you’ll open your curtains (if you’ve got any) – and something will feel – well – different. Sam Cooke told us ‘A Change Is Gonna Come’ and by July ’24 we’ll be on the cusp of it.

Your life is going to suddenly ‘click’ and ‘feel right’. It won’t be because of the therapy or the pills or the ultra-marathons. This thing happening between our feet is going to connect with the metallic stuff in our blood – and collectively, we’re going to update Our North to Version 9.0.

In nearby Withington, Café Blah will sell collections of miniature brass camels for a tenner – and they won’t know why. It’ll just feel right.

By August 2024 the magic will have reached Hebden Bridge. Where else? While picnicking at Widdup, Tracy Brabin, Elizabeth Alker and Andy Burnham will decide the time’s right for a new way. As we all applaud from the surrounding countryside, the trio will announce that ‘The North has indeed Risen Again’. For some inexplicable but entirely proper reason, Brian Eno’s ‘Big Ship’ will fill the air, in perfect stereo.

In Skipton, Mik Artistik will perform magic tricks and with his Ego Trip chums sing ‘Sweet Leaf Of The North’ to the euphoric queues of folk stretching away from both Bizzie Lizzies' and towards Rylstone Fell.

The trio of North’s then continue up our beloved Pennines, Making sheep skip, farmer’s wave joyfully when you forget to close that gate – and road cyclists move to the side when they hear traffic approaching. As autumn 2024 gets closer, the entirety of our Northern Kingdom – from the sub-tidal zone at Formby – to its opposite number in South Shields will be awash with a sense of wellbeing, love and positivity, not seen since James first performed ‘Sit Down’.

Barnard Castle is next for this unstoppable force: Anyone in County Durham who has ever experienced problems with their vision will be cured (without the need for laser corrective eye surgery). While Opticians will close from lack of trade, they will, as one, be drawn to establishing local tour enterprises – to show the increasing number of people travelling to the town to test their new eyes – the wonders of Upper Teesdale.

By the time Mag, Grid and True drop in on Corbridge, the Alker, Brabin and Burnham administration will have appointed Simon and Jenny from 'RE' as Environment/Gorgeous Colours/’It Makes Sense’ Ministers. As Diwali/Hanukkah/Christmas approaches, you will be astonished at how amazing you feel. Negativity will be a difficult-to-recall concept.

The Northumbrian ‘wave’ will continue with Si King being elected by the people as ‘Leader of Salsa’ – and he’ll establish Pico de Galla collectives from Bootle to Berwick, where we can all move as one in a ‘Cuban Collective’ style, while dipping our homemade nachos.

The Summer Festival Of The North, hosted by Berwick’s Curfew Micropub in August 2025 – will celebrate the very moment our three power-givers leave us for a brief period crossing the sea – before being welcomed into Scotland by Nicola Sturgeon and The Proclaimers.

So there you are: You heard it here first.

It’s going to be tight over the coming months. There will be times when you worry about the future. But because we’re all going to be affected by a force much greater than anything we’ve experienced previously – you must look forward to the day that Mag, True and Grid arrive in Stockport. Things aren’t just going to get easier – they’re going to get better.