A Vital Blast Of Angst, Anger And Desire

Former Chumbawamba frontman Dunstan Bruce explains why he’s not ready to be the invisible man just yet
Jo Haywood.
November 10, 2022 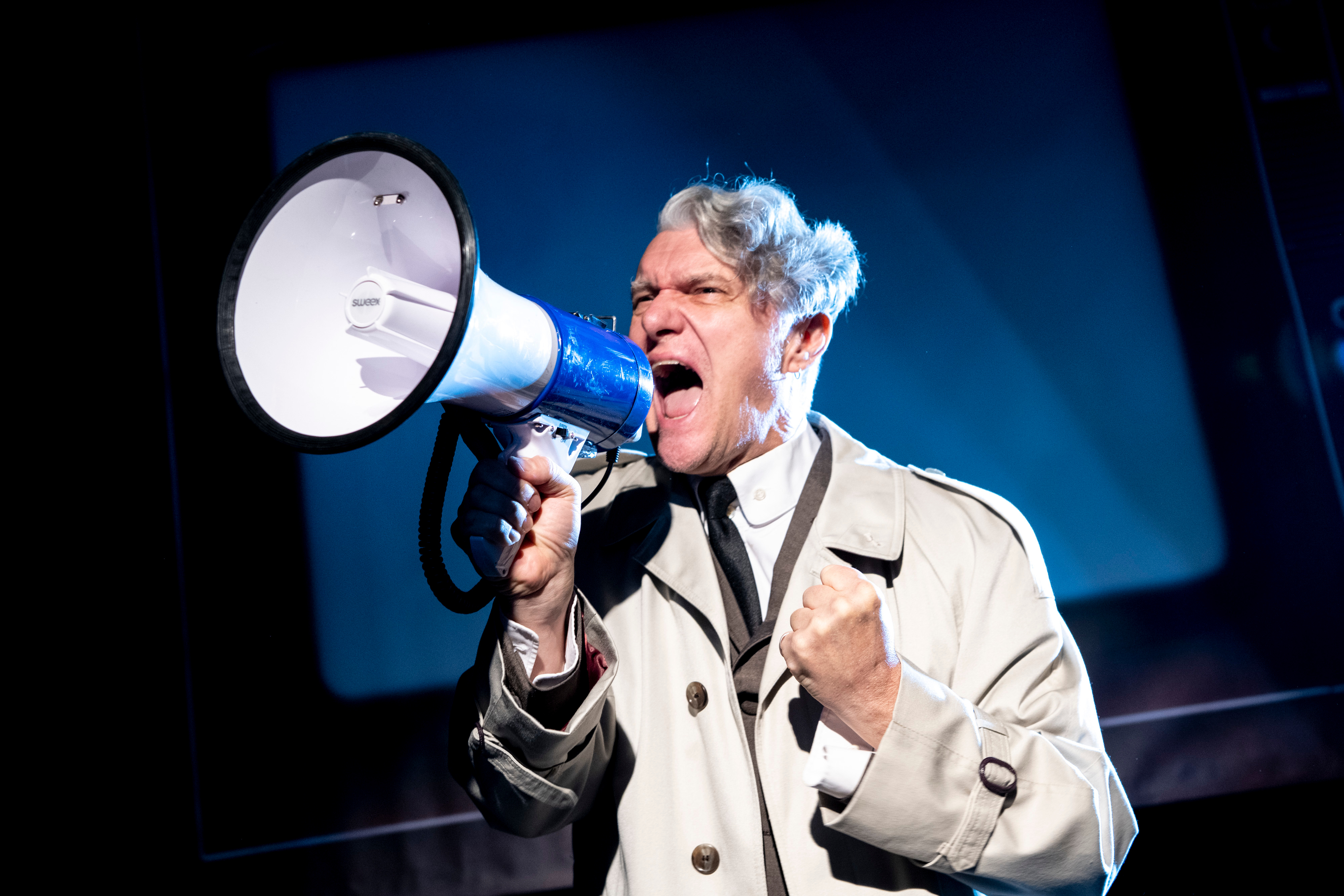 Former Chumbawamba vocalist Dunstan Bruce brings his new one-man play to Leeds Playhouse this month. A rollercoaster of despair, anger, love and, ultimately, hope, it’s a riotous journey that should resonate with anyone who once thought they could change the world, and is still determined to get back up again. Jo Haywood sat down with Dunstan recently and asked the questions:

Tell us about your one-man show Am I Invisible Yet?‍

"It’s basically my personal journey around the idea of: ‘What do you do when you reach middle age, when you’re still angry, and want to remain relevant and visible? Where’s your place in the world?

"I’m taking people on an existential voyage using poetry, prose, music and film. To be clear, it’s not a cosy fireside chat reminiscing about my ‘Tubthumping’ past; it's more a vital blast of angst, anger and desire. It’s a love letter to hope, humanity and the haphazard heart. It’s full of humour too – it’s not a po-faced lecture."

You’re bringing it to the Courtyard theatre at Leeds Playhouse on 26 November. You have strong connections with the city, so does this feel like something of a homecoming?

"Coming back to Leeds always does. Whether it’s performing with Interrobang (the band I formed in the mid-2010s) or doing this show. It’s weird; I still feel northern. That doesn’t leave you. This is where I grew up for the second time, this is where my peers are, this is where my closest friends are, this place is full of so many abiding memories.

"And now being back in Leeds, I want to let people see I haven’t lost that fire, that desire after emigrating south. I’m not going to lie; I want to impress people with the show. I want to blow their socks off. And I kind of still want to be thought of as one of theirs, one of the community carrying on with the continuum of dissent."

You joined Chumbawamba when you were living in a squat in Leeds. Was there a sense of revolution in the air at the time and did you feel that you could change things through music and action?‍

"We were young, naïve, arrogant, bold, forthright, opinionated, righteous, fearless idealists. Everything and anything seemed possible. There were no limits to what we thought we could achieve. And that’s how it should be. The passion, the belief, the determination, the hope we had was intoxicating. Everyday felt like a revolution because we were learning and changing and soaking up knowledge at such a rate that time just sped up. It was electrifying.

"I look back at that time with the biggest pair of rose-tinted spectacles on because yes, we thought we were changing the world and, in a small way, we were. We all were, not just Chumbawamba. We used to have a couple of banners in the early days of the band that said: “The music is not a threat. Action that music inspires can be a threat.” I think that still rings true for me still. But it’s not just music; it’s all art. It’s all people. It’s all of us."

Were you surprised by the level of mainstream success the band achieved?

"It was totally bonkers. We never set out to have a hit single, to be famous. We were happy being an independent band making a small living from constantly touring. It was an absolute blast. We’d found a way of getting it to work and it was incredible. When ‘Tubthumping’ happened though we grasped the moment with both hands, we jumped in, we took the risk because we had nothing to lose.

"We wanted the adventure, we wanted to do something different, we wanted to see what it was like being in the mainstream, trying to change the world from within. Turns out it was a pretty depressing place to be but, hey, we tried to do something with that platform, with that fame (which soon turned into infamy!). What happened to us was extraordinary and, even though some of it was a tad excruciating, it was also remarkable and interesting, eye-opening and fun. I don’t regret it."

Do you still feel like you can change the world?

"In a word, yes. I think we are changing the world every day in small, small ways. Maybe the goal posts moved, maybe the bar lowered, maybe my expectations changed, maybe I turned into a realist but yes, I came to realise that change can occur in loads of different ways. It doesn’t have to be some huge magnificent gesture or a massive seismic shift to feel like you’re making a difference.

"Touring the show and doing the post-show Q&As has helped me understand that maybe I’m contributing every day, nudging people, pushing people, inspiring people, irritating people even to get back into the fray. I still had something to say and I didn’t want to fade away so I decided to make a noise about it. Hopefully it rubs off on people who come to see the show. Hopefully it makes a difference. Hopefully I can be a catalyst, a firestarter!"

Do you think a band with the same punk-revolutionary ethos could have a similar impact today?

"Everything is so different now but there must be bands and performers out there who are having an impact. They exist. Maybe they’re not in the mainstream in the same way that we were because maybe that mainstream doesn’t exist anymore. Or is more rarefied."

The words “I get knocked down but I get up again” are displayed in neon on the side of Leeds Playhouse; how does that make you feel?

"Ridiculously proud! Alice [Nutter, former member of Chumbawambs and fellow playwright] once said, “It’s better to be a one hit wonder than a no hit wonder”, and that always made me chuckle. She was responding to people accusing us of selling out as if having one hit was something we should be ashamed of. F*** that sanctimonious b******s!

"I love what Chumbawamba achieved, what we tried to do with that moment of fame. And how we have accidentally inveigled our way into popular culture. I love that Leeds Playhouse embraced it. It is such a universal slogan; you can apply it to just about any situation yet it was this anarchist pop band who popularised it. I love that."

Does it still reflect how you feel? And is it a fair description of the resilience of the city (and the North)?

"The film I Get Knocked Down and the show Am I Invisible Yet? are both all about that idea. Resilience. Getting back up again. Never giving up. Chumbawamba were always heavily influenced by all those 50s and 60s kitchen sink dramas and then later by films like Brassed Off and The Full Monty. They had that northern sensibility that we totally embraced. And still do to this day. I use the phrase in the show (and it does actually get a groany cheap laugh) but it embodies the ethos of the whole show. I’ve never shied away from the song or the sentiment. In fact, I do the weirdest of tributes to the song in the show."

Your former bandmate Alice Nutter is also a playwright, recently working with the Playhouse on its Decades series of six short plays covering six significant decades. Does this mean that theatre is the new punk?

"Art in all its forms pushes the boundaries. It has to. It’s imperative to me that it does. Show the world in different, new, challenging ways. Ask questions. Challenge us. Makes us look at the world differently."

You describe your play as “a rollercoaster of despair, anger, love and hope”; would you say that you’re more hopeful than angry these days?

"I’d say I’m a bit of a swinger. One day I’m incredibly depressed by the news; the next I see some small action that some group of people has done and I think, “Yes! Things can change!” Part of the show is about a younger generation of artists and activists who give me hope. Lots of hope. It’s not over yet."

Should we actually be angrier?

What’s that slogan? “If you’re not angry, you’re not actually paying attention.” Something like that. I think it’s more that we can’t give up, we must go on. We have to!"

What kind of conversations do you hope the show will elicit?

"One of the things the show manages to do is create a feeling of community; that we are quite literally all in this together. Not in some condescending, bull**** way that the Tories try to make us believe. The post-show Q&As in particular are incredibly rewarding because that becomes a conversation; a discussion that we all share in; that isn’t just me preaching to the converted. It’s about us all sharing our experiences and our feelings about getting older, how we stay relevant, stay engaged. And it means that people don’t feel alone. Sometimes I end up just facilitating the conversations that go on. It feels empowering and helpful, and it feels like it’s doing something more than just entertaining. And that feels important."
‍
And finally, are you invisible yet?

‍
"I mean, no – obviously I’m not – the title is disingenuous and self-aware. But the play is about the idea that we’ve all felt invisible; it’s not just me. We all thought that we were someone once, you know, we all thought we were going to take on the world and do these amazing things, and then our lives go off in directions we never expected or it’s not the thing we wanted it to be. So now it’s about facing up to that, accepting that life f***s up and knocks us down, but we all have the capacity, one way or another, to get back up again."

‍Am I Invisible Yet? is in the Courtyard theatre at Leeds Playhouse on Saturday 26 November. Book online at leedsplayhouse.org.uk or at box office on 0113 2137700.