An evening of unmissable five-star brilliance at Theatre By The Lake
Eileen Jones.
October 26, 2022 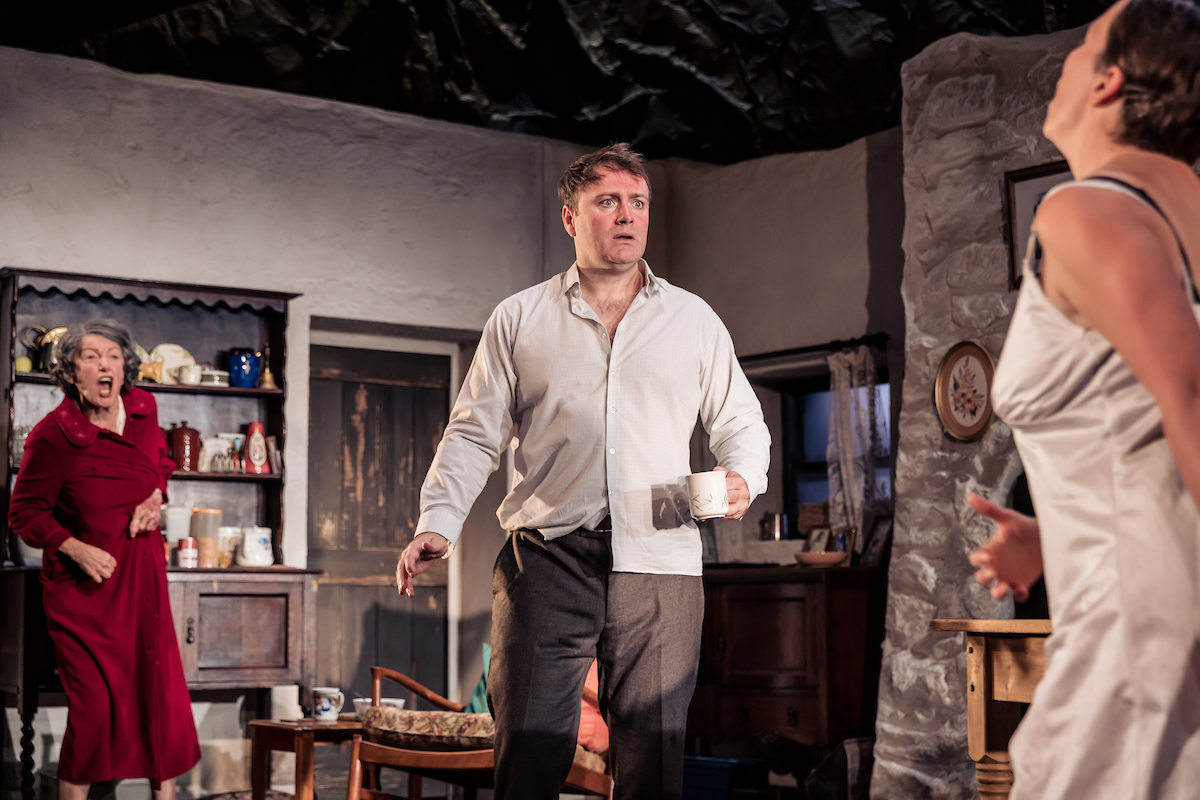 In the week that Martin McDonagh’s critically acclaimed Banshees of Inisherin opens in cinemas across the UK, Keswick’s Theatre by the Lake just happens to be reviving his classic stage play.

Martin McDonagh has a visionary observer’s take on the psyche of rural Ireland. For all his global achievements – and global settings – with films such as the Golden Globe and Oscar-winning Three Billboards Outside Ebbing, Missouri, and the cult-classic In Bruges it’s to Ireland that he keeps returning, and to the troubled past of his country. Born and brought up in London, to Irish parents, he spent his childhood summers dividing his time between Easkey in County Sligo where his mother was from and Connemara in County Galway where his father’s family came from.

And in the week that his latest work of cinematic genius, The Banshees of Inisherin hits the big screens across the UK, how deliciously coincidental that Theatre by the Lake should revive his stage play The Beauty Queen of Leenane. This is set just 30 years ago, in an Ireland that McDonagh can remember, unlike Banshees, placed on a fictional Irish island in 1923 as civil war rages across the mainland. It is, nevertheless, a million miles away from modern Ireland. Just imagine, only 30 years ago it was still a dream to get away and work in England; today there’s thousands of English scouring their ancestry to get an Irish passport.

To get into the mood, to get into McDonagh’s mindset, we went to see the new film just the night before watching the play and if you’ll forgive a brief diversion, it is astounding and astonishing and brilliant, both script and direction surely award winners, not to mention some of the finest screen performances you’ll see this decade.

But back to the live stage, and further demonstration of the McDonagh versatility. It already has awards, of course, including a Broadway Tony nomination for Best Play back in 1998, but this version is fresh and vital and compelling. It’s directed by the Theatre’s artistic director Liz Stevenson, who continues to lead this extraordinary venue to ever greater heights, matching the lofty surroundings of its lake and mountain setting.

A summary: it could becalled Irish Gothic, set in a remote cottage in the mountains of Connemara, where 40 year old  Maureen Folan (Elizabeth Appleby) lives with her manipulative and possessive harridan of a mother, Mag (Susan Twist). Trapped together in a poisonous cycle of daily battles and with endless rain driving at the walls, Maureen dreams of escape. When a chance for happiness arrives in the form of unexpected suitor Pato, (Cillian O Gairbhi) she dares to hope. But that’s not the way of McDonagh’s reality. Mag thwarts her dreams in the bitterest way, and we begin to see that Maureen’s mental state is fragile. Tragedy is inevitable.

The fine details of Natasha Jenkins’ set are exquisite: the ghastly orange kitchen bin, the Pyrex dishes, the crucifix on the wall alongside a framed photo of Bobby and Jack Kennedy. Above all, there’s the intense and brilliant performances. McDonagh has a painfully incisive way of exposing the vulnerabilities of his characters, and here it’s a universal, not just Irish, understanding of how mental instability is fostered and nurtured by isolation, loneliness and poverty of ambition. Mag’s bitter sourness, Maureen’s desperate longing to be loved, these are outstanding performances. So too the shy and awkward Pato whose monologue as he writes to Maureen from London was greeted by spontaneous applause.

There are comparisons, inevitably, with the recent film, and in the restless, edgy, insensitive Ray, brilliantly portrayed by Cameron Tharma, we see shades of the young Dominic in Banshees. There’s the capacity for cruelty, the occasional bleak and black humour. And of course, the language, the lyrical Irish sentence construction: “Another bit of coal on the fire put”.

By the end you’ll be emotionally wrung-out, but what’s so wonderful about the live stage is the final reminder that this is “only” acting. Never have we been so relieved to see a happy, smiling foursome of actors take a bow. It’s an evening of unmissable five-star brilliance but McDonagh doesn’t do comfort.