Beatrix Potter As Never Seen Before 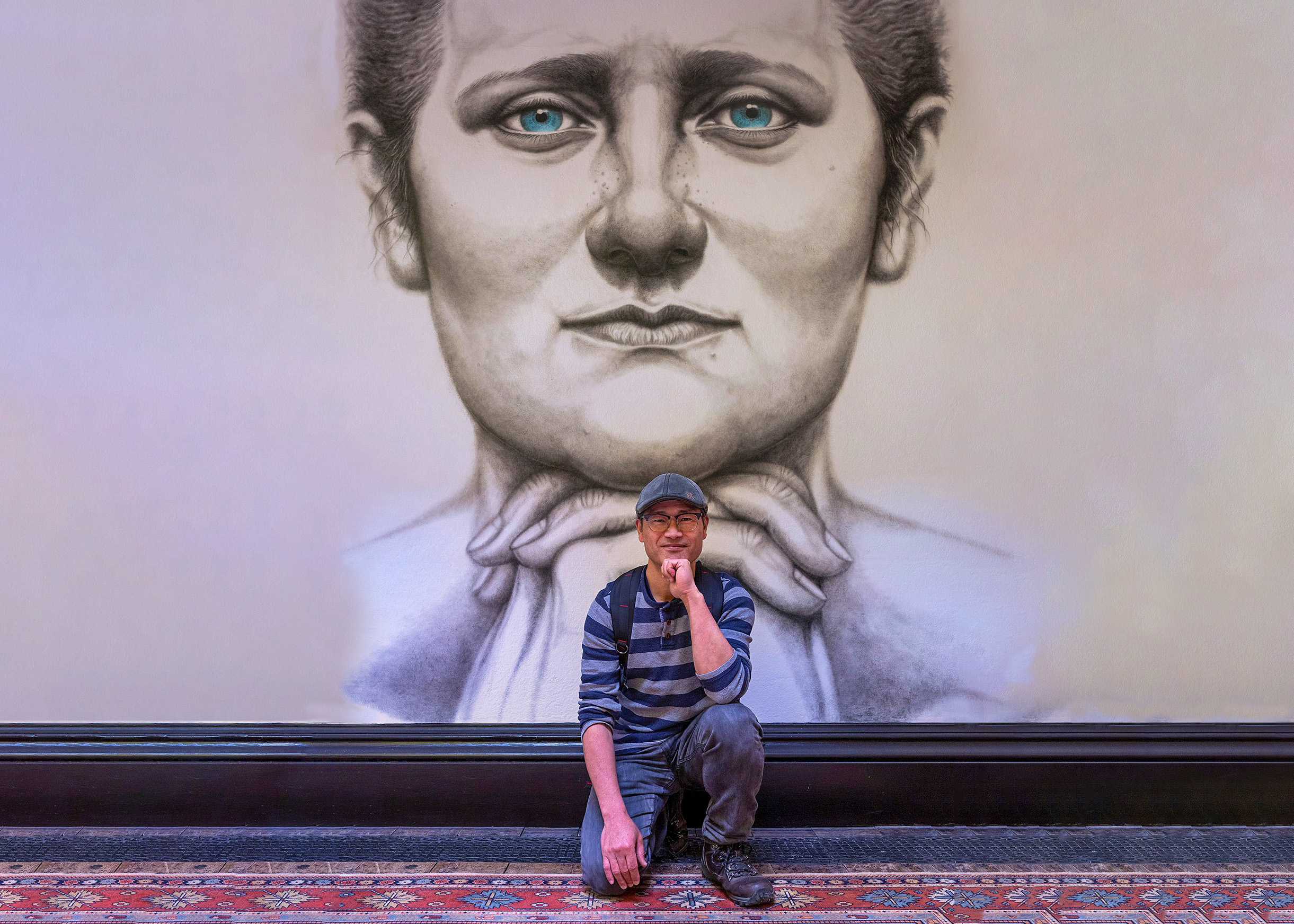 Her face covers the entire wall of of the reception hall at Allan Bank, a gigantic and startling portrait in tones of grey, the only colour being the most vivid of piercing blue eyes penetrating the room. This is Beatrix Potter as never seen before, the artist, natural scientist, writer and illustrator, and above all – in the eyes of artist Hideyuki Sobue – a conservationist.

A Letter to the Earth from Beatrix is Hideyuki’s latest and most ambitious project, commissioned by the National Trust and supported by Arts Council England. A Japanese artist who has made his home at Grange over Sands on the Cumbrian coast, Hideyuki chose to work in this, the former home at Grasmere of Canon Hardwicke Ranswley, one of the founders of the National Trust to whom he bequeathed this house. Which, significantly, had once been the home of William Wordsworth.

“I want to signify the line of continuity between John Ruskin, Wordsworth, Potter and Rawnsley in the development of the earliest landscape conservation movement,” Hideyuki explains. “I aimed to portray Beatrix in her early to mid-twenties, before she reached her full potential in her later years, to immortalise her like a Muse so that her voice echoes in our contemporary society and beyond.

“Young Beatrix, depicted in a manner no artist has ever portrayed, is also designed to be relatable to young audiences, her burgeoning environmental awareness similarly relatable to the youthful leadership of the modern environmental movement.” And to illustrate this point, he has copied the pose, the posture, of his subject, from the image of Greta Thunberg, teenage climate activist, as shown on the poster for a BBC documentary. Beatrix, like Greta, faces directly forward, hands interlinked under her chin reflectively, almost prayerfully.

But while this portrait demands, commands, full attention, turn around to see what Hideyuki has painted on the opposite wall climbing the two-storey staircase. This is the Big Ash, a huge and almost terrifying tree which winds and creeps its way to the roof, branches reaching out like animated tendrils, painted in just just three primary colours - yellow, cyan and magenta. It was created in what he calls a “limited timeline”, with the addition of two lost weeks when Hideyuki fell from a ladder beside the scaffolding, and hurt his hip. It was, he says, his greatest ever artistic challenge.

Allan Bank, which was badly damaged in a huge fire in 2011, is still being restored, although it’s open to the public. It’s a work in progress, so that at first glance, Hideyuki’s work looks as though the decorators have been in. There’s a more formal, conventional exhibition of his series of small works inspired by Beatrix's drawings, in one of the upper rooms where, among many treasures, you might spot Hideyuki’s own take on Squirrel Nutkin and Jeremy Fisher. There’s also a smaller version of the Beatrix portrait which you can scrutinise more closely. Especially those eyes.

The ash tree is based on one at Cartmel Priory, once visited by William Wordsworth, and such connections are all-important for Hideyuki. “At Allan Bank, Wordsworth wrote his first edition of The Guide to the District of the Lakes, which later galvanised the conservation movement not only in the Lake District but also in America. His passion was succeeded by Canon Hardwicke Rawnsley, who inspired Beatrix Potter about the importance of conservation. This old ash tree symbolises the unbroken chain of the ecological movement up to this day.”

Wordsworth is a favourite. In 2015 Hideyuki created a completely new portrait based on the life mask of the poet in the archives of the National Portrait Gallery. This diptych – two separate paintings – with a  stark picture of a sea of daffodils stretching back to infinity, showed Wordsworth as he would have looked 200 years previously at the age of 45. It was unveiled to mark the 200th anniversary of the poem I wandered lonely as a cloud at another of Wordsworth’s former homes nearby at Rydal Mount. It was believed to be the first new portrait of the poet for 150 years.

This time, with the Big Ash, Hideyuki returns to his artistic and cultural roots: “I referenced the Japanese traditional paintings, particularly those produced in the Edo Rinpa (School of Kōrin) style by Sakai Hōitsu and Suzuki Kiitsu.” The style recalls the Japonisme of the cultural elite in which Potter grew up: a key artefact in the major Beatrix Potter exhibition at the V&A is Beatrix's late 19th-century Japanese tansu cabinet, once part of her Kensington home and transported to Hill Top, her house in the Lake District.

“The distinctly Japanese treatment – at once architectural and at the same time intensely graphic – alludes to the international nature of wealth, empire and aesthetics that underpinned what on the surface appears to be a deeply local, native and internalised culture of the Lake District villa.”

Hideyuki says that the title of the project, "A Letter to the Earth from Beatrix", imagines a youthful letter from Potter to herself as an older person, but also addressing future generations. “Inspired by Rawnsley in the conservation of the Lake District, Beatrix Potter acquired and then bequeathed large estates to the National Trust in its early days, forming the core of its 25% ownership of the present National Park. At the same time, she maintained and supported farming traditions, notably the Herdwick sheep breed, which is now a mainstay of the Lake District Cultural Landscape World Heritage Site.”

A Letter to the Earth from Beatrix is at Allan Bank, Grasmere, until Dec 15.