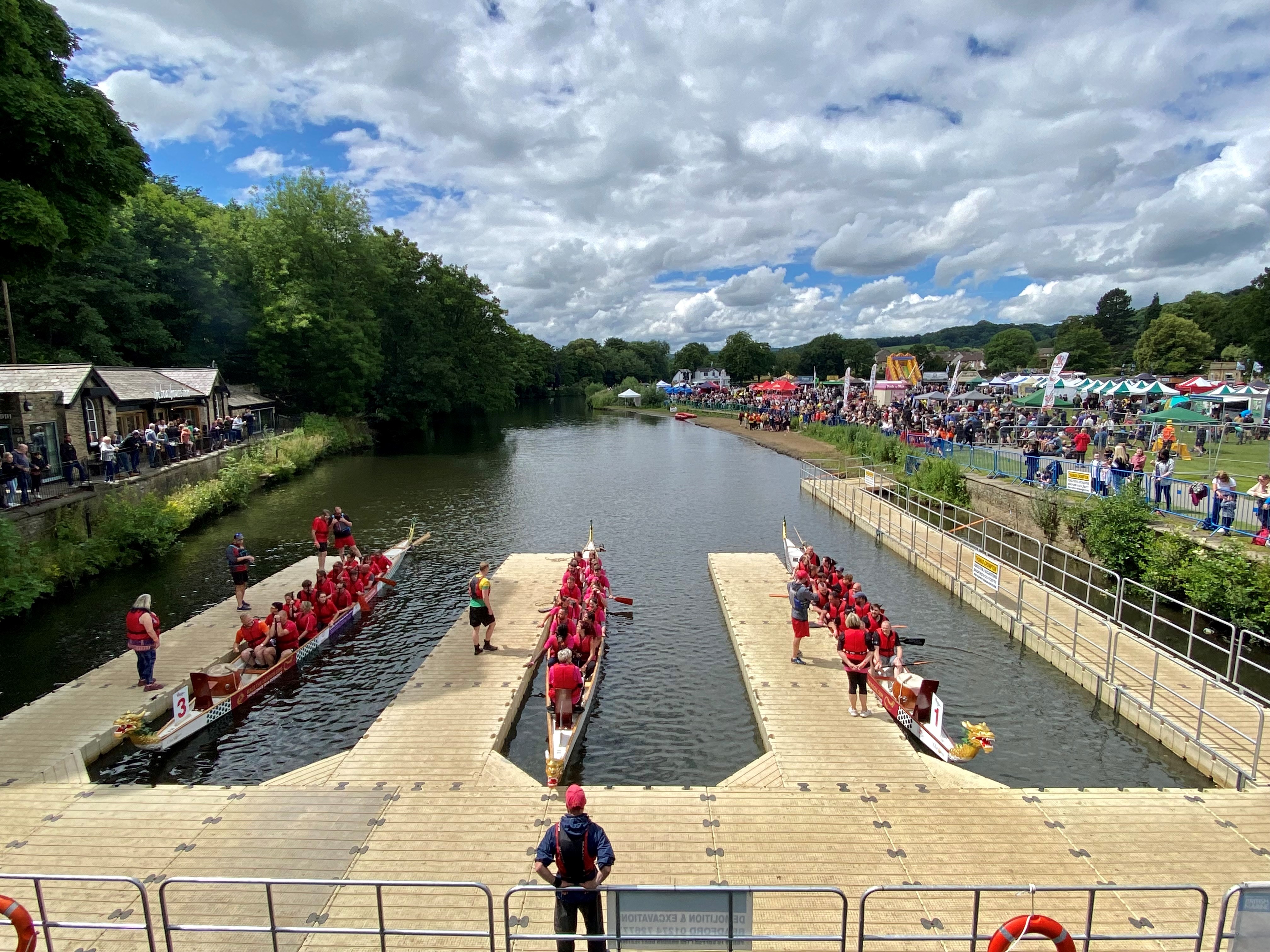 This weekend saw a spectacular return to the water for the Bradford Dragon Boat Festival at Roberts Park in beautiful Saltaire – after missing the last two years.

The three-day event is the largest of its kind in the UK and would definitely make any self-respecting Chinese paddler sit up and take notice.

Friday 1st July was ‘Youth Day’, with competitions both throughout the day – and in the evening. Sixteen teams from Primary and Junior Schools (Years 6 to 9) across the Bradford District battled it out first, before the evening competition (which is open to any school, youth or community group throughout the UK who work with young people aged between 11 – 19).

It did look as though Bradford Youth Service (West) were going to be the group to beat on Friday – as they fielded 2 very strong teams.

Following several years of developing the sport of Dragon-boating within the Bradford district, the Youth Championship has firmly become an integral part of the hugely successful Bradford Dragon Boat Festival.

After a damp start on Saturday, the blue skies firmly took charge and Day 2 - ‘The Lord Mayors Championship’ provided a fantastic day, with 34 teams battling it out for River Aire supremacy. The Championship day raises money for the Lord Mayor’s chosen charities, who are the Marie Curie Hospice in Bradford and Bradford Community Kitchen. It is hoped that over £30,000 will be raised overall.

Marie Curie is the UK’s leading end of life charity. It provides frontline nursing and hospice care, a free support line and a wealth of information and support on all aspects of dying, death and bereavement. The Bradford Hospice is one of nine hospices that offer the reassurance of specialist care and support, in a friendly, welcoming environment, for people living with a terminal illness and their loved ones. The dedicated team in Bradford care for local people who are living with a terminal illness, and their families.

Alongside its nine hospices across the UK, Marie Curie Nurses work on the front line, night and day, in people’s homes, providing hands-on care and vital emotional support. It also has trained Helper volunteers and advisers with practical information and support when people don’t know what to do next or just need to talk. But it’s volunteers like David Harvey – the Chair of the Bradford Hospice Fundraiser Group, that make it ‘happen’ at events like the festival. They have a dedicated Facebook page: please show them your support. https://www.facebook.com/MarieCurieHospiceBradford/

Bradford Community Kitchen began in 2017 when a team of people who had been volunteering to provide food for homeless and vulnerable people in Bradford got together, having seen a need to do more than simply provide food. This new organisation was keen to be able to see what the unmet needs of the homeless and vulnerable were and signpost them to organisations that could help improve their lives.

When the Covid-19 pandemic struck, and the use of indoor premises was no longer possible, the trustees met and decided they should continue to operate as a food bank. They knew their homeless clients were being offered accommodation and that other vulnerable clients would be safer if it delivered food to their homes.

The charity supported families with children, their motto being: “No child should go hungry". They knew that, with the schools being closed, families would be struggling, and that there would be people who were facing unemployment and may never had to access a food bank before. It decided to operate a delivery service which would preserve the dignity of families.

As grants became available, the charity took advantage of them to ensure those eligible for free school meals have been fed during half-terms and the holidays, and has worked with a number of schools to this end.

During those holidays it delivered hot meals and fresh fruit. Grants have enabled Bradford Community Kitchen to expand its service and the organisation now delivers up to 100 food boxes a week.

While Saturday provided a magical carnival atmosphere for both competitors and visitors, there was no limit to the good-natured competitive ‘banter’ between the 20-person-strong teams. West Yorkshire Fire and Rescue Service RED PHOENIX were absolutely clear they had an overall win in their sights. The power they put through their paddles certainly seemed to reinforce this. Don’t worry too much if your chip pan catches fire in West Yorkshire…you’re in very good hands.

Perhaps with an emphasis more on a ‘fun day’ (with a capital F), was a very special team, from a very special Special School in Keighley. If you’re of a certain age – and you remember Timmy Mallet – multiply him x 20 and you’ve got the Beechcliffe Bandits. It is quite possible that their maritime prowess throughout the day was supported by Pimm’s. Perhaps.

What an utterly fantastic bunch of teaching and support staff. Beechcliffe School even has the best headteacher – ever. Officially.

Both the teams from Baildon CofE School were in the best form too: Emerson’s Eagles and Soaring Eagles were two outfits that looked like they might keep going and eventually run-aground in Malham. With Drama Specialist Susan Adams leading from the front…there may even have been an impromptu Henry IV Part One performed in the shadow of Salts Mill, before home time.

Like their Beechcliffe colleagues, it was abundantly clear that with only three weeks of school remaining this year, the dedicated men and women from Baildon were already looking slightly haunted at the prospect of being without their pupils across summer. Don’t worry Guys: It will be September before you know it. (And the ‘Back to School’ stuff is already in – in M&S.)

Sunday 3rd July is ‘Multi Charity Championship’ Day, with 48 teams raising funds for their own special charity. Morrisons Whole-Sail-Oars are paddling furiously for CLIC Sargent, while Cancer Support Yorkshire are deploying the ‘Armada’ tactic – with 5 boats going off throughout the day. Baildon Belles WI are taking to the water – and rumours that they plan to supply ‘heavy’ slices of Victoria Sandwich to opposing boats, have not been substantiated.

What an event. What a weekend: Perhaps because of the weather? Perhaps because the people are amazing? Perhaps because we’re all so relieved that restrictions have eased? But probably, because there is nowhere quite like our wonderful North of England. The City of Bradford – and everyone involved in making this weekend’s Dragon Boat Festival a success, should be so very proud of their achievements – and incredibly excited about the run-up to 2025.

.…And next year hopefully West Yorkshire Police will make sure that fab PCSO’s 948 Hussain and 520 Parker, get to swap their stab vests – for buoyancy aids!

"This is a huge opportunity to celebrate our extraordinary district and for our young, ethnically diverse population to become leaders and change-makers and begin a new chapter in our story."