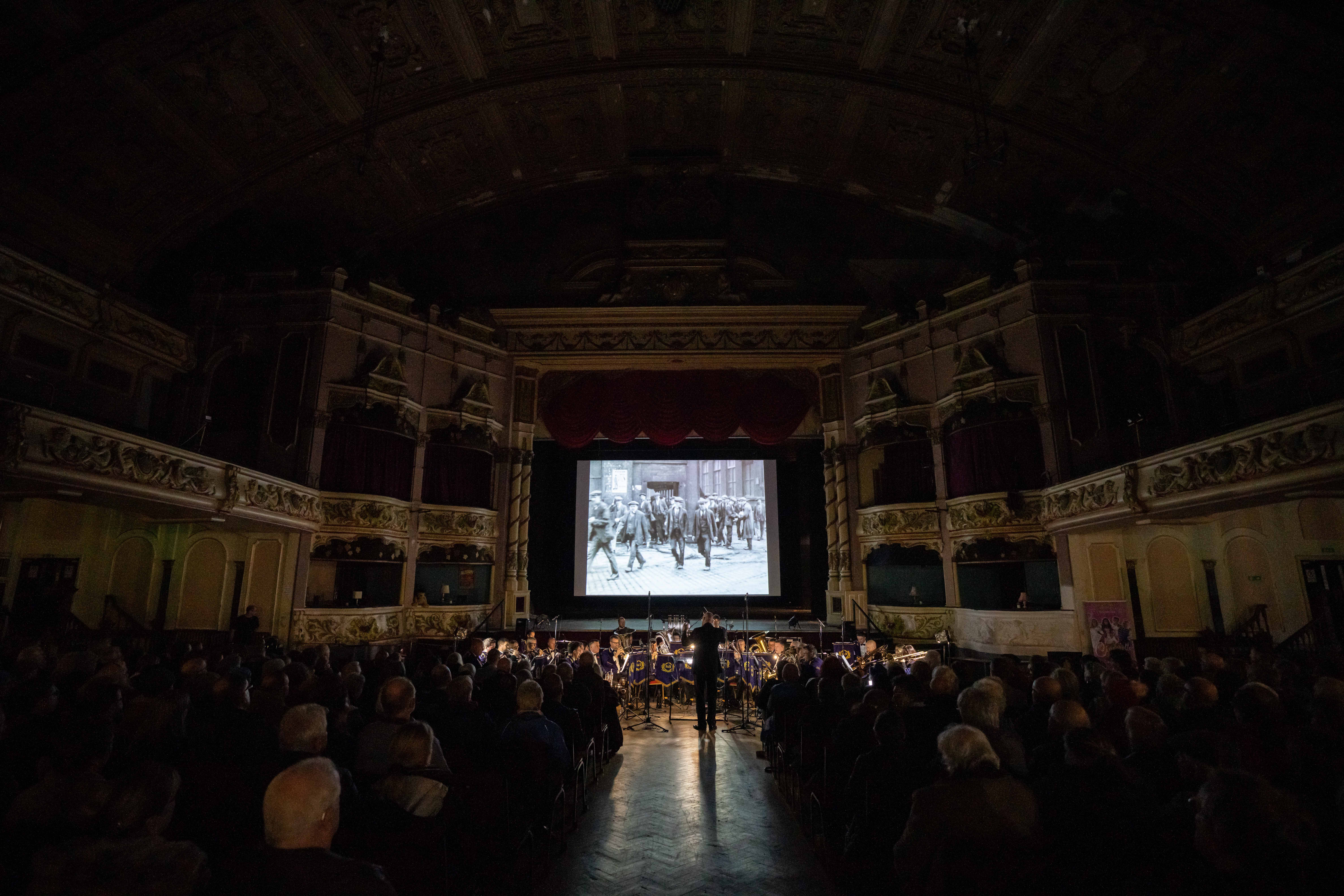 Having a baby means basically kissing goodbye to your social life. Nights out until late are swapped for nights in and early bedtimes. So, when Mag North asked me to head to Morecambe Winter Gardens to see ‘Echoes of the North’ - the final event in this year's Yorkshire Silent Film Festival, with The Brighouse and Rastrick Band, I jumped at the chance. It might’ve been a Sunday teatime, there was no late night or alcohol involved but, to us, it was a night out. A bit of culture. And God knows we needed it after ten months of non-stop Baby TV.

I’m ashamed to admit that I haven’t watched many black and white films, and fewer silent films. (An absolute travesty, considering I grew up in the birthplace of Stan Laurel. I know. Terrible.) Saying that, I do think that ‘It’s a Wonderful Life’ is arguably the best Christmas film ever made, I adore the 1940 version of Daphne Du Maurier’s ‘Rebecca,’ and I love musical theatre, so I was genuinely looking forward to it. I’m thrilled to say; it did not disappoint.

Over five years of hard work and planning went into this incredible performance, and it was clear that everyone involved was immensely proud to be a part of it. It began with a heartfelt speech by the composer of the show, Neil Brand, thanking the entire team for their hard work. Special mention went to The Yorkshire Film Archive, North West Film Archive, North East Film Archive, and London’s Archive Film Agency, who kindly supplied the footage, some of which had never been seen by the public until now.

The performance was split into two halves; the first being three, short, silent films with live music from local musicians being played alongside them. Given that the music was improvised, (‘winging it’ as Neil himself said), I think they did an incredible job.

The first film was ‘Suspense’ and that was the right name for it! It showed a mother and baby, alone at home, as an intruder broke in. After being called at work, the husband rallied the police and drove at speed to rescue her. The musicians did a brilliant job of pairing the music to the film, resulting in a genuinely tense experience.

The second was ‘The Great Train Robbery’ which showed four criminals hijack a train and rob the occupants. There were gun fights, horses, and even a ‘do-si-do’ thrown in for good measure. Again, the music matched the visuals perfectly and really enhanced the film.

The third short film was Frankenstein. Now, I’ve watched some horror films in my time (despite being a complete wuss), but there’s something especially eerie and spine tingling about watching a scary silent movie. Whether it’s the fact that there’s no colour, whether it’s the ‘jumpiness’ of the film, or the crackle of the images where the tape has deteriorated over time, I don’t know. But I do know that, that Frankenstein was a little bit frightening! The music being played alongside added to the atmosphere and, at times, I forgot that I was listening to live music. It could’ve so easily been a part of the original film. Fantastic.

A short interval was followed by the second half of the performance, which comprised of four films, with footage from 1898 – 1929, pulled from the archives of the four wonderful archive organisations previously mentioned. The incredible Brighouse & Rastrick Brass Band played alongside them; the music composed by the hugely talented Neil Brand. Neil told us that he had never written for a brass band before now, despite always having wanted to. You would never have known.

It was clear that Neil was proud, and honoured, to have been able to compose the music for, in his words: “the best brass band.” It was lovely, and quite emotional, to hear him talk about this project and what it meant to him, and everyone involved.

Neil is an incredibly talented composer. I won’t pretend to know much about music or composition; but I will say that, in my opinion, John Williams is the greatest composer I think the world will ever see and, honestly, there were times tonight where I could’ve been listening to one of John Williams’ pieces of music. It was emotional, uplifting, sombre, joyful, and every emotion in between. The band, with Ben Palmer as orchestral instructor, did a truly beautiful job.

The film was split into four sections, each focusing on a different theme. We saw horses and carts, shipyard workers, seamstresses. Picnics, boating, swimming, and larking about on the beach (in full suits no less!) There were hoots of laughter echoing in the auditorium, and smiles on faces as people were taken back to a simpler, and more wholesome time. Children maypole dancing, enjoying trips to the funfair and the carnival took me back to my own childhood.

There were soldiers in training, soldiers heading off to war and then returning, often with severe injuries. The music here was particularly sombre and really did make you feel emotional. I held it together until they played ‘I Vow to Thee, My Country’ and ‘The Last Post.’ I’m not ashamed to admit that it brought tears to my eyes, as I’m sure it did for many in the audience.

The performance ended on a wonderful, joyful high, followed by a well-deserved, standing ovation from the audience. (I think the applause lasted almost as long as the show!) A huge well done to everyone involved.

I’ll take a liberty here and say that I’m sure I speak for everyone who was present, when I say it was an honour and a privilege to be in the audience tonight. I feel very grateful to have had the pleasure of seeing the Brighouse & Rastrick Brass Band, and to have experienced the music which was both wonderfully composed and beautifully played. It was a magical conclusion to wonderful festival.

To keep up-to-date with the work of Yorkshire Film Festival, click HERE