A crucible of the Industrial Revolution hosts calls for people to 'Rise Up'
Colin Petch.
November 14, 2022 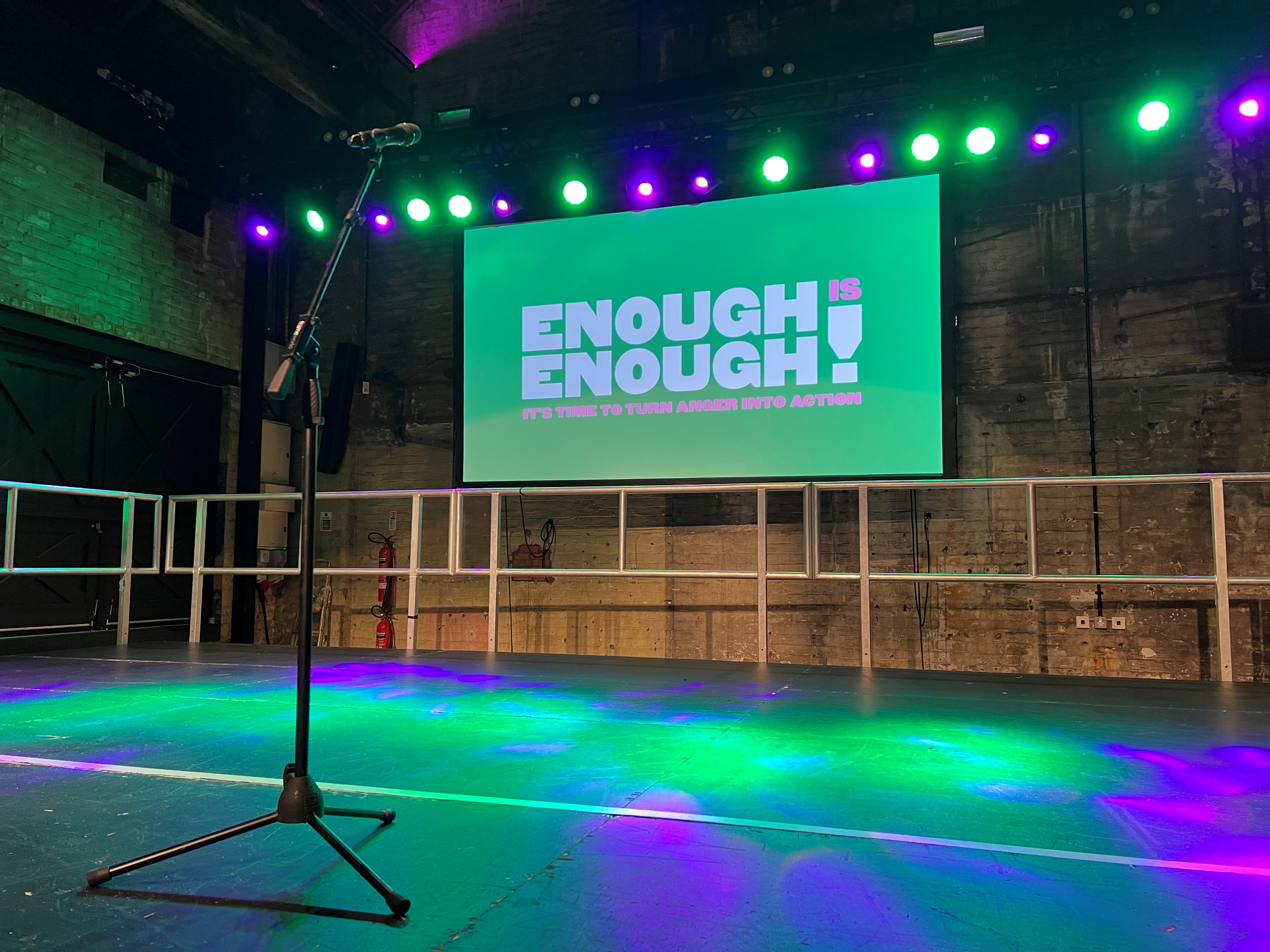 It’s not an over reaction to suggest that many of us ‘have a bad feeling’ about what lays ahead this winter – and as the UK prepares for Jeremy Hunt’s Autumn Statement this week – a capacity crowd of one thousand concerned souls packed into The Boiler Shop on Newcastle’s South Street last Thursday to hear speakers passionately confirming Enough Is Enough.

Across the North, the Enough Is Enough campaign is gaining momentum and this rally was poignantly staged in the 1820’s building that was the world’s first locomotive works, built for Robert Stephenson & Company.

To the strains of the 1973 Strawbs hit ‘Part Of The Union’ (as relevant now as it was then) Campaign Regional Organiser Declan Mulholland took to the stage to kick off proceedings. He opened with: “We’re saying No to the Cost Of Living crisis.” Predictably the response from the crowd was enthusiastic.

Mulholland: a young, confident and immediately likeable Geordie, clearly cares passionately about his city, his people and his region. He went on to list the campaign's 5 simple demands – and each one was met with overwhelming support: “A real pay rise for the people who knit the fabric of our society together. Slash energy bills. End food poverty. Provide decent homes for people to live in – and tax the rich.”

He went on: “ We in the North East deserve better. We don’t want Food Banks. We don’t want people living in fear and desperation. We’re here today to say Enough Is Enough.”

The first speaker was the self-described ‘Geordie Dole Poet’ Tom Pickard. Born in 1946 in Cowgate, Newcastle, Pickard is also an accomplished documentary maker and was responsible for the iconic ‘Word Of Mouth’ series from the early '90s.

Pickard read from his collection of works, each piece chosen because they perfectly exhibited the trials and struggles of the working class over generations. Each one read with a sense of urgency to the assembly.

Union representatives from the Public and Commercial Services Union (PCS), the Rail, Maritime and Transport Workers Union (RMT) and the Communication Workers Union (CWU) followed, each stressing the importance of unified action to effect change. Each one confirming that their union – and members, are ready to stand side-by-side with the Royal College of Nursing (RCN) and the Public Service Union UNISON, as Nurses prepare to strike for the first time in over one hundred years. A significant portion of Thursday’s crowd were from the nursing community and were clearly buoyed by the level of support.

Lorna Rudd from the Acorn Tenants Union took to the stage to explain that: “We are up against a well-organised class – and from the picket lines to the papers – we do not let politicians and pundits tell us who we are and what we want. We must organise – and leave nobody behind. We will not have the burden of another crisis that we did not create.”

Rudd went on to demand ‘good quality council housing, instead of profit mechanisms for developers.’

Lisa Doherty, from the NUFC Fans Food Bank addressed the crowd and was, in a word: Inspirational.

Zarah Sultana, the Labour MP for Coventry South delivered an emotional address that resonated with everyone in the room. She spoke of how she would be on the picket lines supporting Nurses who quote: “…can’t pay the bills and feed their families. It’s a disgrace”

To rapturous applause and cheering, Sultana confirmed: “I’m in Parliament to represent the interests of the Working Class. That is what I will always do.

Sultana explained that the Tory party are tackling the right to strike – but won’t stop there. She spoke with real emotion about the ‘divide and rule’ strategy employed by the government, together with the scapegoating of migrants and refugees: “The lack of housing, the overcrowded schools and hospitals isn’t because of migrants” declared the incandescent 29 year old politician. Sultana concluded by describing Suella Braverman’s recent ‘Invasion’ statement as the language of the BNP.

Kate Osborne, the Labour MP for Jarrow, (who must be constantly operating in the shadow her predecessor Red Ellen Wilkinson) had a difficult act to follow in Sultana – and proceeded to use her platform to highlight her treatment by the press. On an evening that was about galvanising support, her oration was perhaps a little self-indulgent.

The crowd had also been promised Northern Treasure and Hairy Biker Si King, but he was unable to attend and instead sent a video message urging everyone to work for change. While I‘m certain this product of a Gateshead working class upbringing believed the silk scarf tied around his neck demonstrated his bohemian leanings, his appearance did have undertones of ‘local lad made good’ – and I just hope that scarf had a ‘Farnon’s’ label on it and not a ‘Liberty’ one.

The Keynote ‘performance’ came from Ian Lavery. The veteran former Miner, Leader of the NUM  and now MP for Wansbeck delivered a call-to-arms that galvanised the crowd. He talked about that night’s success by the Liverpool Dockers. About how being in a union wins disputes – and how working people should not be on hands and knees begging for decent wages.

Lavery’s language was emotive, combative and authentic, in particular when confirming he will be alongside the nurses as they take action to improve their conditions. “We’re fighting not for money – but for the future of our kids – for our communities.”

The former miner ended by asking the crowd: “Why should people in the North East have a life expectancy less than other places in the country? We’ve got to get up off our knees.”

Declan Mulholland closed the evening with a rallying call to help the region’s foodbanks, show solidarity and support striking workers. All three of his requests were met with huge cheers and applause.