Sir Alan Ayckbourn was in the audience when Mag North attended the opening night of his latest play at Windermere’s Old Laundry Theatre
Eileen Jones.
November 2, 2022 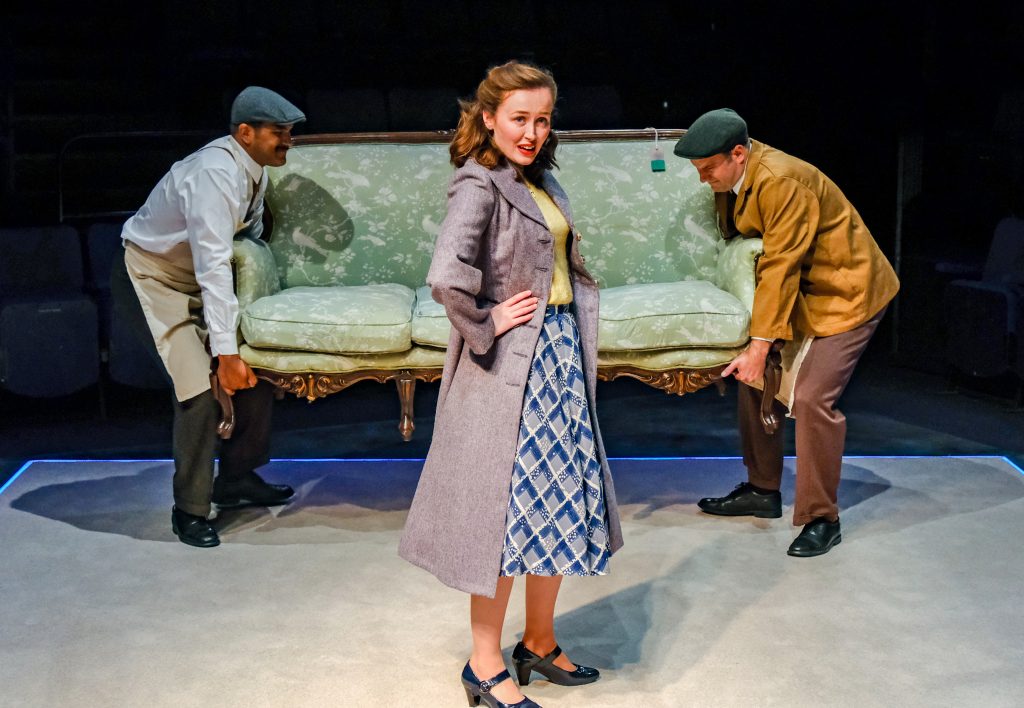 What stories a house can tell! The walls around us see everything we do, see all sides of the same story, see the hidden asides, the tears and the anger we think we are hiding. And the walls of the same house see generations growing older, they adapt to the wider social change, and of course they offer no censure, no comment, no rebuke.

The house here – in a middle class London suburb – is the creation of Alan Ayckbourn in Family Album, his 87th play. And in a simple set, directing five key characters across 70 years in time, the 83 year old dramatist demonstrates his acute understanding of human frailty, his awareness of changed attitudes and, very keenly here, his empathy for women. The effect is profound, the slow pace of the drama unfolding as time goes by.

At the start, in 1952, furniture inherited from the family is being moved into the new home of Peggy (Georgia Burnell) and John (Antony Eden). It’s a period piece in both style and attitude; she wouldn’t feel safe without net curtains at the window, he plays golf with the chaps from the office and knows exactly where a woman’s place should be. He insults: “Don’t start pretending you’re dopier than you are”, and she seethes, using beeswax and a duster to scrub away her resentment.

Their daughter Sandra (Frances Marshall) is to be denied the life chances offered to her brothers. “I don’t think women are born with a natural aptitude for algebra,” her father declares, to shocked gasps from the 2022 audience. Sandra is damaged; when she inherits the house, she’s struggling with a drink problem and a deserting husband. Her story brings a small touch of humour which is, at the same time, tinged with sorrow and desperation.

And so to the third generation, Sandra’s daughter Alison (Elizabeth Boag) who is clearing out that same furniture (by the same removal men, David Lomond and Jude Deeno, whose modern company is labelled Up Yours) to move with her wife Jess (Tanya-Loretta Dee) to a new home, away from the ghosts of the past.

The direction is simple and clever; the characters from each period appear on the stage, in the room, at the same time, but are not aware of one another. The only other props are the sound effects of closing doors.

It’s another triumph for the Old Laundry’s director Roger Glossop and his theatre-producer wife Charlotte Scott who befriended Ayckbourn many years ago. The dramatist has always brought his shows here, and Family Album has transferred from his home at the Stephen Joseph Theatre in Scarborough. And further evidence that the creative powers of the north’s most prolific playwright show no signs of diminishing.