“I’m not applying for citizenship — I’m having my citizenship restored.”
Colin Petch.
November 8, 2022 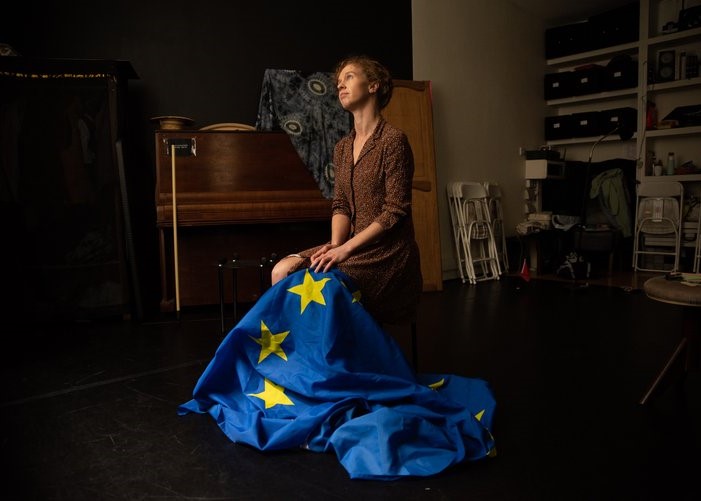 Anyone who’d read the previews and was heading along to Manchester’s Jewish Museum on Sunday night to enjoy the latest event in their wonderful ‘Synagogue Nights’ series would be forgiven for believing they were in for a ‘Side-splitting one-woman comedy show’.

‘Going Deutsch’ written by and starring the amazingly talented London theatre maker and improviser Anna Clover was indeed funny in places – but also incredibly uncomfortable in others.

Perhaps because of the location – the performance took place in the exquisite 1874 Synagogue, built by the then growing Sephardi community– there was a palpable sense of quiet reflection and respect, even in the café and foyer beforehand.

The show is about metaphors. We first encounter Anna waiting nervously alone at a table for two, for the arrival of a ‘toxic-ex’. Her current relationship isn’t working out. The landscape’s changed and her ‘partner’ is now exercising control over her choices.

So Anna is looking to the past: should she rekindle something with her extremely problematic old flame? Is it right? What will friends and family think? As we learned on Sunday – it’s complicated.

Anna: “For me personally, finding the metaphor made my show Going Deutsch possible. I had spent years searching for a way to talk about the impact of intergenerational trauma on the descendants of holocaust survivors, but it felt too expansive. And frankly, too grim. Besides ‘it was ages ago’. But Brexit brought the holocaust back into the present day for me, because as a grandchild of survivors I am entitled to reclaim the nationality stripped of my grandparents 80 plus years ago. This gateway to an EU passport felt like a ‘no brainer’, but other members of my family were horrified. ‘How can you even think about going back?’. This is a sentence I heard a lot in my 20s, but not about countries funnily enough. About boyfriends. The one who kept me a secret for a year. The one who bought themselves a first-class train ticket but left me in standard. The one who dumped me at the Riga ghetto whilst I was looking for the names of murdered relatives. I could go on.

“I realised that Germany had a role in this show I was trying to a make. They were the ex. Reformed, apologetic and seeking forgiveness. In Going Deutsch, you meet Germany, but maybe by another name. We date. Maybe it even goes a little further. They’re sexy. We consider if we could have a future. But I keep being reminded about how they treated me in the past. And through metaphorical distance I get to explore how I still feel the impact of the holocaust in my bones 80 years on. I get to sing and dance, eat sweets and tell genocide jokes. Because the metaphor helps me to comprehend the incomprehensible. I can play about in the world of the naughty highs and desperately disappointing lows of getting back with a charismatic, shitty ex who never really liked me. The metaphor makes it safe to go there, even when going there is considering how incredibly lucky you were to escape with your life first time round.”

Everyone in the audience knew who ‘Hans’ the ex-boyfriend really was. We all understood that the premise of the story was to highlight the dichotomy of: if ‘making friends’ with Germany is acceptable – as the UK has adopted a more nationalistic stance following Brexit.

Under Article 116 of German law, descendants of those who fled Nazi persecution — most of whom are of Jewish heritage — are allowed to "restore" their citizenship and, in turn, claim German passports.

The German Embassy in London says it has received many thousands of citizenship applications since the Brexit referendum in June 2016. In comparison, only around 20 such requests were made annually in the years before Brexit.

The Jewish community in Britain have worked ‘under the radar’ for 80 years, and tried to integrate as much as possible, and be as British as possible, and keep their foreign origins – if not hidden – then certainly in the background.

In 2016 – suddenly everything changed: Perhaps not everyone who voted for Brexit was a racist, but there was a strain of racism and bigotry in the Brexit campaign that made many Jews feel very uncomfortable as first or second-generation migrants.

Anna expertly unpacked the trauma and complexity that might come with establishing a new relationship with an ex who once-upon-a-time – wanted to kill you. With the help of Bob Dylan, Take That and Haribo, she flirted with her beau – and her choices.

Anna’s storytelling, stagecraft and wizardry at engaging her audience was utterly superb, but I spent the entire performance waiting for the next uncomfortable truth. And when six million people are exterminated by a regime – the uncomfortable truths keep coming.

After the show, the Q&A was every bit as thought-proving and moving as Anna’s performance had been.

Ms Clover was clear she didn’t have the answers, but had explored at length with her own family the importance of remaining a European after Brexit. As had much of the audience.

“My family was of the mentality that I had every right to claim what I was owed, and that it would be useful for me to have a German passport after the UK withdrew from the European Union” came one response.

But not every Jew feels the same. ‘Jewish Britain’ has an online community of more than 10,000 members – and a commonly sighted view in this group is: "Any British person who applies for German citizenship is effectively forgiving Germany for the Shoah." [Shoah is the Hebrew word for Holocaust.]

Many Jewish people see a German passport – a European passport merely as a ‘vehicle to becoming European again’.

"This disaster that we call Brexit has led to me just finding a way to secure my future and my children's future" explained one second generation audience member.

Another was particularly expressive in her language: “We should get what ever we can from the B*******.”

Sometimes it can take years to move from suspicion to a more sympathetic and nuanced worldview. Or in the case of Brexit – it can take a week. A German word did come to mind on Sunday — Schadenfreude (a pleasure derived by someone from another person's misfortune).

In just 70 years, inconceivable as it may seem, being both Jewish and German has become a potential form of protection rather than a fatal liability. The complex questions of identity and statehood that tore Europe apart in the 1930’s have returned as yet another unintended consequence of Britain’s decision to sever links with Europe.

As we quietly (but defiantly) filed out of the synagogue and Anna and the team packed away her Yellow Star and Jelly Sweets at the end of an extraordinarily poignant evening, the last word must go to the elderly gent who seized my arm and explained: “I’m not applying for citizenship — I’m having my citizenship restored.”

‘Going Deutsch’ plays at The Old Courts Wigan on 10 November. Tickets and Info.

Manchester's Jewish Museum is a cornerstone of the Northern arts and heritage community. A visit is essential.