In Search Of Salmon 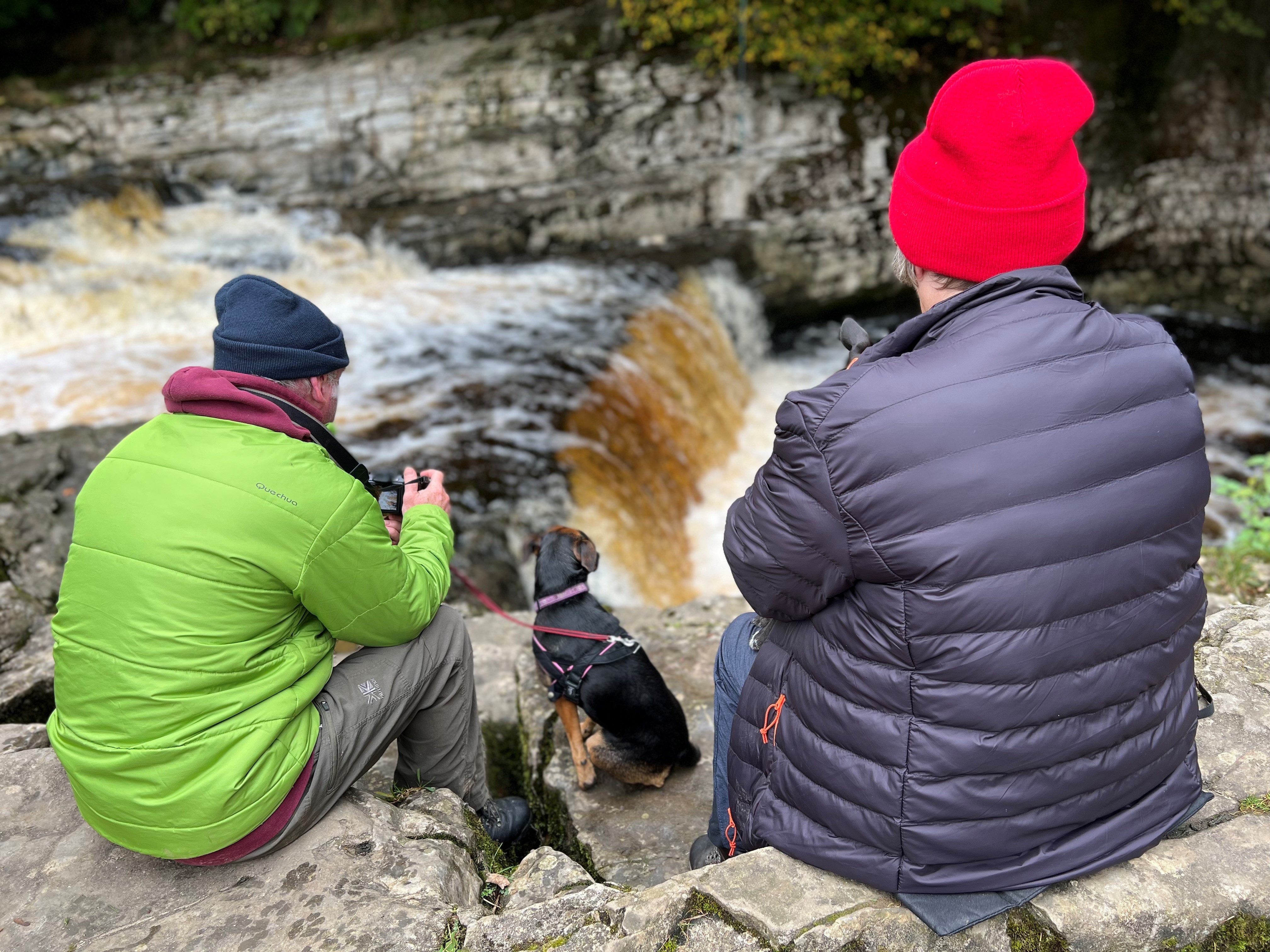 Autumn in the Yorkshire Dales brings the opportunity to witness a spectacular sight on the River Ribble, albeit tinged with a sobering dose of reality: as this particular ‘circle of life’ nears its end (or is it the beginning)?

The majestic Atlantic Salmon is one of the largest fish to be found in the Ribble Catchment. Weighing up to 15kg, they head inland at various times of the year and “run” up the river to the small becks and streams at its source to spawn (lay eggs).

Each winter the fish gather in pairs in areas of good clean water and gravel, to reproduce. The female fish will dig a hollow in the gravel using her tail. After laying her eggs, the male then has the responsibility of fertilisation.

After a journey of thousands of miles, the Salmon return to the stream where they hatched. Which is incredible.

And so on a sunny day in October, a crowd has gathered – almost with an air of reverence – at Stainforth Force, where peat-coloured water thunders over the limestone terraces beneath. All framed below the 17c single-arch Packhorse Bridge, spanning the river a little way upstream.

The River Ribble forms at the confluence of Gayle Beck and Cam Beck near the famous railway viaduct at Ribblehead, in the shadow of the Yorkshire Three Peaks. It’s the only river rising in Yorkshire which flows westward and weaves its way through Settle, Clitheroe, Ribchester and Preston, before emptying into the Irish Sea between Lytham St. Annes and Southport, after a 121 km journey.

While the river system provides a number of globally crucial habitats, notably the 10 mile wide estuary that forms part of the Ribble and Alt Estuaries Special Protection Area for Wildlife. (An average of 340,000 wading birds and waterfowl over-winter in the estuary, making it the most important wetland site in Britain.) But it is only the pristine gravel beds of their birth that the salmon are focussed on reaching. And these beds lay upstream from the seemingly impenetrable natural barriers at Stainforth.

Woolly hats, flasks and sturdy footwear adorn today’s group quietly watching the lowest part of the falls. Among them, Barry and Jan who have a caravan in the village – and head to the Dales most weekends from their home in Barnsley. “I’ve seen four so far this morning. We’ve been here about half-an-hour” explains Barry, as he stares intently into the viewfinder of his DSLR camera.

“You’ve got to be quick to get a photograph. I take about 20 seconds of video and if a fish doesn’t jump in that time – I delete it and start again.”

Jan adds: “We sat here yesterday and there was a lot [of salmon jumping]. Some of them are this big” (she deploys the famous fisherman’s method for sizing a fish: namely hands at least a metre apart in front of you).

Between the couple sits an immaculately behaved little dog, who also stares studiously at the water: “Sometimes he sees them before we do” Jan adds.

As we chat, there's a collective intake of breath behind us, as upwards of 20 people spot a Salmon trying to breach the first of the cascades. It’s unsuccessful and I see it just as it splashes back into the lower pool. That fish was every bit as big as Jan had suggested.

After spawning in the winter, the Salmon (then known as Kelts), have an 80% mortality rate. This is the unavoidable truth of the natural world. From seemingly invincible creatures battling the elements, their journey quickly ends in exhaustion. The carcasses of the dead Kelts provide important food for invertebrates (and other animals along the river banks), which in turn provide food for the Salmon Fry. And so the process begins again.

But the reality of the situation is not lost on another spectator: “We came last week and people were cheering every time a fish jumped. I think its sad. It’s almost the end for them” a Senior Radiographer from Sandbach tells me.

“We have a cottage in Horton [in Ribblesdale] and get here almost every weekend. He’s retired…” [she gestures towards a gentleman happily perched behind us on a limestone outcrop, while their dog attempts to recover a biscuit dropped in a ‘greyke’] – our NHS hero tells me, “…but I’ve got 2 years to do. I’d move here like a shot when I retire. I love the fells.”

We discuss the current state of the NHS and the plan to ballot for industrial action – and she confirms that clinical staff ‘can’t strike’. “We want to look after people. That’s we why we do it.”

It is an honour to share a moment with such a diverse range of people, all brought together to experience an event such as this. An elderly gentleman – Mr Ingle – sits in a hewn out natural stone seat, sometimes resting his chin on his walking stick. “I first came here in 1941” (I quickly do the maths).

“My mother sent me to family in Langcliffe from our home in Fulham – because of the bombing. My father was sunk off the Peloponnesus and she didn’t want to lose me. We’re a resilient lot, just like these creatures.” He gestures with his stick towards the water.

He seems suddenly to be lost in a memory, before asking: “Did I teach you?” Mr Ingle never left the North – and had a career teaching at Sedbergh School.

After an hour or two at the riverside and having witnessed three Salmon successfully head upstream, it seems like the right time to head home. This annual spectacle wouldn’t be possible without the work of organisations including the Ribble Rivers Trust, the Yorkshire Dales National Park, the Environment Agency and the community team behind Settle Hydro, whose efforts ensure this pristine environment remains accessible to both the fish and their fans.

The epic Salmon migration can be seen each year between September and November. Stainforth Force is a short walk from the National Park car park at The Hollies, Stainforth.