A powerful project by Phil Collins and Oleksiy Radynski and co-commissioned by HOME and Manchester International Festival, gives Engels a voice for today
Mag North.
August 25, 2022 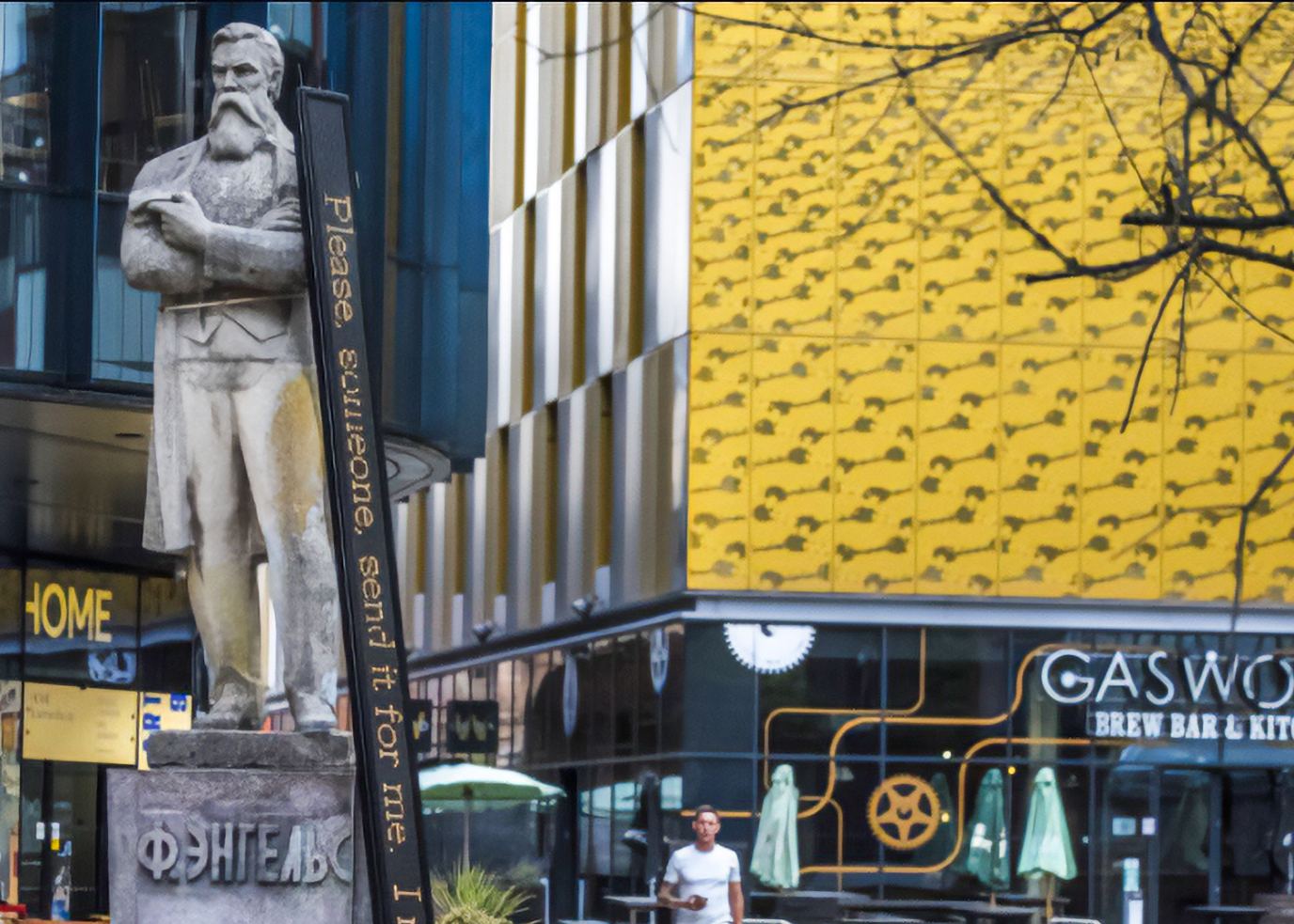 Intervention is a collaborative project by Phil Collins and Oleksiy Radynski, co-commissioned by HOME and Manchester International Festival, re-contextualising the decommissioned statue of Friedrich Engels that stands in the centre of Manchester through the perspectives of writers and activists from Ukraine.

In response to Russia's invasion of its sovereign neighbour, Collins and Radynski have temporarily transformed Engels into a mouthpiece, amplifying the voices of Ukrainian writers and activists. Scrolling across one of two temporarily installed LED panels are a programme of texts by Svitlana Matviyenko, Mariia Volotilina, Olexii Kuchanskyi and Radynski, sharing their experiences of the last six harrowing months, and offering perspectives on notions of Russian imperialism.

On the second LED panel a newly commissioned text by social anthropologist Volodymir Artiukh combines analysis on the international economic impact of the war with personal testimonies of those most affected, and excerpts from Engels' own writings. Together, these voices articulate decolonial and anti-imperialist positions on ideas of power, oppression and resistance, in what is the biggest geopolitical crisis unfolding in Europe since the end of the Cold War.

To mark Independence Day of Ukraine, and six months since the invasion by Russia, artist Radynski’s latest text was uploaded to the first LED screen yesterday (Thursday 24th August). Radynski’s text will look back at events of the past six months, including the role and complicity of the west, and as such it will function as the closing chapter for Intervention.

Artist Phil Collins had this to say about the project: "The work of Friedrich Engels lies at the heart of Manchester’s progressive, socialist, internationalist history, its relevance and meaning evolving with different historical processes. This has only deepened over the last six months as we witnessed the brutal rise of fascism from the Russian Federation, the extension of neo-colonial destruction and violence, the hypocrisy of the governments of Western Europe, and our craven dependence on consumer convenience and fossil fuels. Asking a statue to talk through the words of Ukrainian writers, activists and artists has been both an opportunity to press home the realities of life under prolonged imperialist aggression, which the Western imagination easily grows tired of thinking about, as well as to engage again with Engels’ ideas. I’m hugely thankful to Oleksiy for collaborating on our Intervention, as well as to all contributors for sharing their work, critical thinking and insights."

Intervention is a temporary installation adding to the original artwork and film Ceremony co–commissioned by HOME and MIF in 2017, which saw the decommissioned statue of Freidrich Engels transported from Mala Pereshchepyna, Eastern Ukraine to Manchester. Ceremony highlights the legacy of this German philosopher in the city where he lived and worked for more than twenty years. The film follows the retrieval of the statue, its journey to the UK, as well as personal stories of people in Manchester and a large-scale inauguration event organised with local communities, making connections between Engels' work and present day socio-political conditions in Britain.

You can watch Ceremony by clicking HERE

Intervention will remain in place until Wednesday 7th September 2022, after which time the LED screens will be removed retaining the permanent installation of the original artwork Ceremony. An online publication featuring all 8 texts by Volodymyr Artiukh, Svitlana Matviyenko, Mariia Vorotilina, Olexii Kuchanskyi and Oleksiy Radynski will be released on HOME’s website at the end of the installation.