Mad Alice: The Talk of the Town

On a perfect late summer’s evening, Mag North join a 30-strong group of tourists for a ‘Bloody Tour of York’ led by the incomparable Mad Alice.
Colin Petch.
September 8, 2022 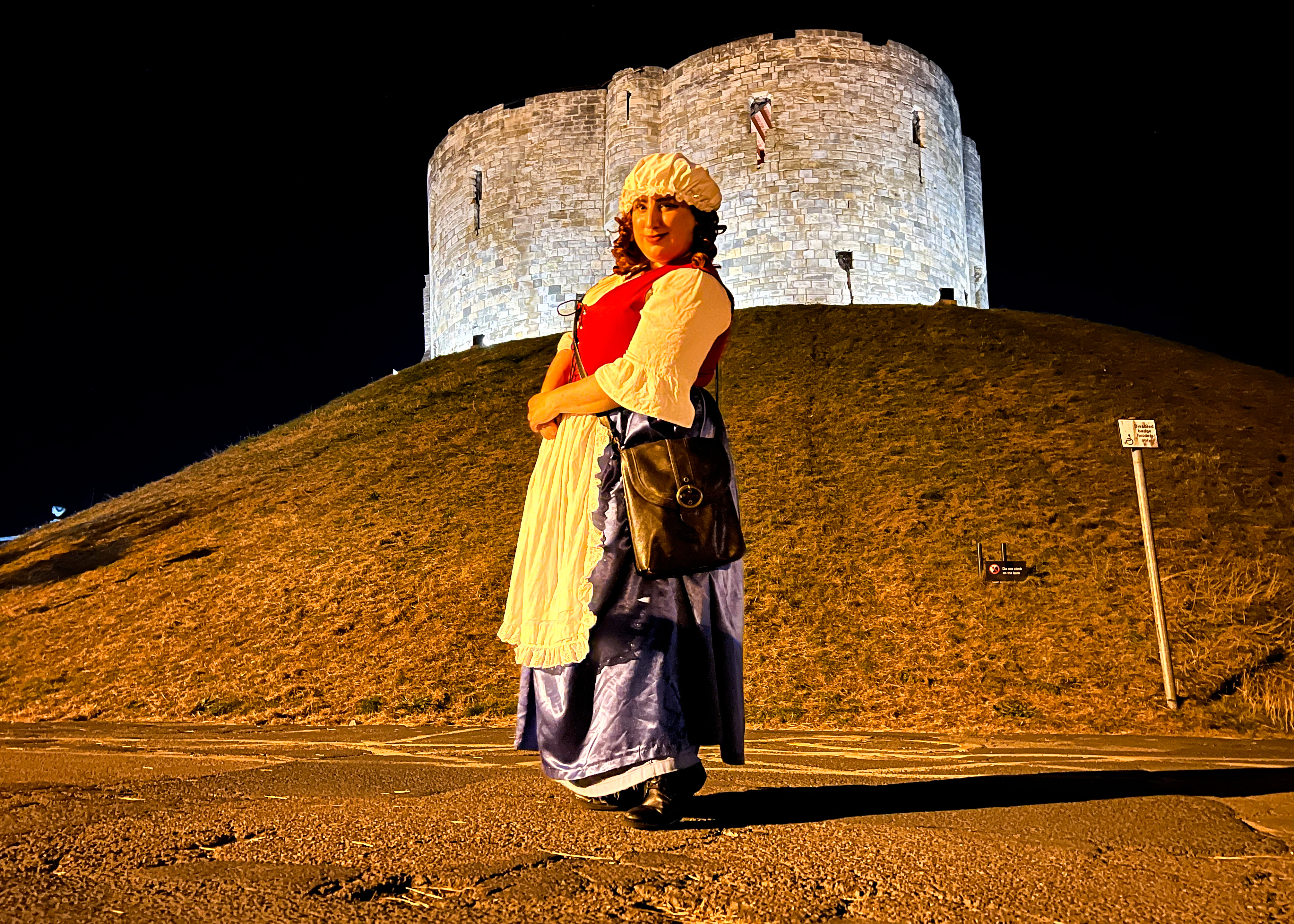 The undisputed ‘Most Haunted City in Europe’ has long been famous for its nightly Ghost Walks that shepherd the willing (and sometimes unwilling) through the ancient streets, steeped in a bloodstained history that would [possibly] make any battle-hardened Roman Centurion head for the hills.

An assortment of individuals emerge from the York shadows almost every night of the year - in a bid to petrify, panic, paralyse and put-the-wind-up. Quite a few of them resemble the imagined lovechild of Jack Sparrow and John Cooper Clarke – and that vision alone might be enough to have you reaching for the Nytol when you get back to your hotel.

Another one is ‘Top-Hatted’ – and predictably, dressed entirely in black. Unfortunately he doesn’t carry a Dracula-type walking cane to reinforce the persona, but a two-step aluminium ladder instead. I observe him (from a safe distance) while waiting for our own guide to materialise. His booming delivery from atop his B&Q perch, clearly marks him out as a graduate of an esteemed institution such as SADA (Selby Academy of Dramatic Arts). His particular gathering of overseas devotees are immediately under his spell – as like The Pied Piper of Hamelin, he jumps from and folds his ladder in a single deft swish of [black?] magic, before marching them off into the night.

(Should you feel compelled to fire off that email, I do know the Pied Piper played a Pipe – and you are absolutely right that there is no record of a ladder ever being employed as part of his Lower Saxony pest control duties.)

So we more than have the ghost-angle covered: but Mad Alice does something slightly different. While still focussing on much of the York blood spilled over the centuries, her experience promises to be based more on historical fact. Perhaps that’s the reason there is an eager crowd massing outside the St William’s College rendezvous, for the second of our guide’s events that evening?

The excited bunch include Missy from Tasmania, who for the last seven weeks has been on an epic European tour. “I’ve just got to York from the Highlands and Islands. I’ve been in Germany and Ireland too.” She informs me she’s off to Liverpool tomorrow. Blimey.

Newlyweds Verity and Mark are enjoying their slightly delayed Honeymoon. The couple from Aylesbury advise: “We enjoyed a ‘Ghost Walk’ last night and thought this tour would be different.”

And there's Bibbi: A Vlogger from Seoul, who was live-streaming everything that was happening. (I’m assuming I now have quite a following in South Korea, as a result.) Adorned in a Slytherin scarf, Bibbi is on an extraordinary trip that has taken in every Scandinavian nation – before heading to UK: “Yesterday I took a taxi from Skipton to Malham to see the Limestone [Pavement] in the Harry Potter movies. I told the driver I wouldn’t pay more than £25.00!”

As we chat in the shadow of the Minster, I become aware of a vision approaching who resembles a mash-up of Nell Gwyn and your ideal Medieval Banqueting Maid. While my eyes might have widened, nobody else reacts – so I say nothing – because I’ve previously chatted to a Seamstress with very muddy boots, on a tram at Beamish Museum, only to be advised by the students I was with that there was no one present. Was I being gaslighted – or can I see dead people? Either way: best to say nothing.

Thankfully it is Mad Alice: confirmed as she moves among the group, clarifying online booking details.

And so we begin. Alice doesn’t need a ladder. She positions herself and is straight into the Plague of 1349, when a third of the population of the country was wiped out. She has excellent stage presence – and must be a historian? We learn about the different plague variants, the doctor’s ‘beak’ stuffed with herbs, the crosses painted on doors. Quite a few of the troop clearly have their first ‘chill’ of the evening.

Next we move on to the steps of the Red House and Alice talks about the nearby Treasurers House. This National Trust property is famed for its hauntings – and our guide is exacting with both the facts behind Frank Green’s cigar smoke  - and Harry Martindale’s 1953 encounter with a column of footless Roman Troops. If you’d like to know the details – I have to leave that to Alice – but a visit to the property in question is now on the agenda for the Mag North’s Most Haunted crew.

Alice moves seamlessly on to an explanation that in York the ancient entry gates to the city are called ‘Bars’ and asked her audience to name them. At this point it becomes obvious that quite a few of the Dads in the party have adopted appreciative and borderline hypnotic expressions while tuning in to Mad Alice’s lecture. Thankfully, through the medium of the Mum-elbow-to-ribs-manoeuvre, order is largely being restored by the time we hear of Guy Fawkes – and his Petergate home.

The Gunpowder plot of 1605 was one of our earliest unsuccessful examples of trying to address sectarian inequality – and its origins are absolutely rooted in York. The testimony of Fawkes’ capture and subsequent torture was gruesome. Why on earth were we ever encouraged to ‘Burn the Guy’ as kids each November?

Our next port of call is the famous ‘Shambles’ and an explanation that this street originally served as the centre of the city’s butchery trade – and hasn’t always been the location to purchase a Wand – or your Bertie Botts Every-Flavour Beans.

Then comes the story of ‘The Pearl Of York’: St Margaret Clitherow. I thought I knew the story, but Alice confirms that wasn’t the case. This brave Catholic martyr and former Shambles resident was tortured for her faith – and for harbouring a priest. Her execution was observed by two of her nephews – still children – along with their friend: the same Guy Fawkes who subsequently went on to challenge the treatment of English Catholics.

The next location is Coppergate, home to the much-loved Jorvik Viking Centre. En route Alice tells me that she doesn’t have a background in ‘treading the boards’: “I actually studied American Literature at University, then worked as one of the ‘explainers’ at York Dungeon.” [Who jump out at you when you least expect it.]

“After a year in Paris, I went to work for The National Trust at the Treasurers House.” She explains she has only recently left to pursue her ‘Bloody Tours’ on a full-time basis. The future looks very bright for Alice.

At Coppergate we hear how York has evolved since 71AD, the Roman arrival and ‘Eboracum’ (the place of the yew trees). After our Mediterranean cousins left us in the 5th century, we entered the ‘Dark Ages’ (not like these dark ages). Then it was the Anglo Saxons – and in 866: the Vikings. Following the Norman amphibious assault of 1066, William dropped in on York two years later – so it should be pressed home that York the city has always been multicultural.

Sadly, as our tour reaches its conclusion, we head to Clifford’s Tower (York Castle) – and hear of one of the darkest periods in the city’s history. Alice becomes serious: “In 1190, the 150-strong Jewish community – even then being persecuted – sought sanctuary in the castle as an angry mob gathered below. Most of those within took their own lives, rather than face being murdered by former neighbours.”

We end at Fairfax House and the unlucky tale of incarcerated horse thief ‘John Palmer’. Thanks to the meddling of an Essex Postman, it was revealed that Palmer was actually notorious Highwayman Dick Turpin. After his trial, our forerunner to Adam Ant met his end at the Knavesmire Gallows.

And following some wise advice from our guide about ‘never passing up a drink’, our thoroughly educated, entertained and perhaps slightly-startled group disperse into the dark of the early September night: like contented spirits heading for their own hypothetical self-contained plane of existence. [You can have that.]

Mad Alice is an absolute lynch-pin of York tourism – as her numerous industry awards show. Her tour is wonderful – along with her incredibly personable approach to visitors.

Booking is essential – and can be made at: https://www.thebloodytourofyork.co.uk