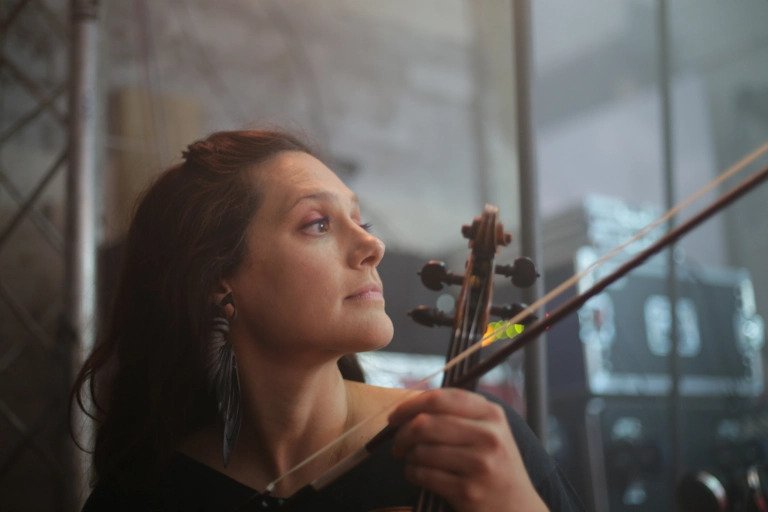 Manchester Collective recently concluded the latest section of their 2019/20 season with a sold-out performance of Ecstatic Dances at Manchester’s Stoller Hall.

Prior to that – along with a rapidly-growing crowd of the ensemble’s Yorkshire following – I was fortunate to witness a remarkable evening of music in the Crypt at Leeds Town Hall, as the Collective embarked on the latest leg of their current season, which has also seen them wow audiences in Glasgow and London, before their Stoller Hall finale.

In September 2019 with Sirocco, Abel Selaocoe transported concert-goers to the verdant plains of Southern Africa, not only with his mastery of the cello, but also with the traditional singing that left many feeling that Manchester Collective couldn’t possibly arrange a more engaging and emotionally charged programme than this.

Every artist must eventually achieve their summit. With Sirocco, surely this extraordinary collection of musicians – led by Adam Szabo and Rakhi Singh – had been able to plant their flag atop their own, personal Everest? No. Not yet.

The Birds, which was a unique and multi-sensory commission in partnership with Opera North Projects, took place as part of Leeds Light Night in October ’19 and saw the Collective transform the interior space of St John the Evangelist on New Briggate, while in the churchyard, a ‘Swans Migrating’ lighting installation had a no-less powerful effect.

Excerpt from ‘The Centre is Everywhere“

Use Up/Down Arrow keys to increase or decrease volume.

The final chapter of the 2019 portion of the current season came in November with The Centre is Everywhere. Performed across 6 very different English cities, the programme chimed perfectly with the national mood. The inclusion of Richard Strauss’ Metamorphosen, which is an elegy for Europe, undoubtedly left many of those lucky enough to have secured tickets – steal themselves for what might lay ahead – as exquisite music gave-way to ongoing geo-political uncertainty.

For an ensemble who are ‘not particularly fond of being comfortable’, this ground-breaking arrangement, featuring Thomas Ades Arcadiana and Peter Warlock’s Capriol Suite, interspersed with traditional folk songs and dances – was inspired. I first heard The Peacock Follows the Hen arranged for Northumbrian Pipes a number of years ago, but Manchester Collective’s reimagining of the piece was sublime.

With a collection of ancient instruments and dominated by his deft use of the Pipe and Tabor, Høxbro’s obvious passion for traditional music dovetailed in a way that you could not have anticipated, with the chamber music which flowed from the strings of Rakhi and Simmy Singh, Ruth Gibson, Abel Selaocoe and Alan Keary.

Storytelling – the bedrock of many indigenous cultures, further added to the magic of the performance, as Høxbro shared a traditional and perhaps sobering tale told across the centuries in Scandinavia. With musical accompaniment, it was distinctly possible to imagine the crunch of snow and the crackle of a warming fire, as those assembled learned of the dangers of choosing Craic over Clergy.

Clearly it is possible to critically deconstruct the work of Manchester Collective and partners. If you do, you’re unlikely to draw a conclusion different to that of the growing number who are being entranced by their contemporary approach to the widest range of collaborations: Namely that regardless of whether you have achieved Grade 8 with your instrument of choice – or are dipping a toe into the ‘classical’ world for the first time – Manchester Collective are doing something very different and they’re doing it in a way that transfers joy and wonder from them to us. Bravo Manchester Collective.