It’s imperative when heading to a Manchester Collective concert, that you are equipped with a fully-loaded superlative toolbox. However tonight at the Howard Assembly Room in Leeds, as part of the world-renowned Leeds International Concert Season, this group of ground-breaking artists created a space through their music, that really made words redundant. Superfluous.
Colin Petch.
May 20, 2022 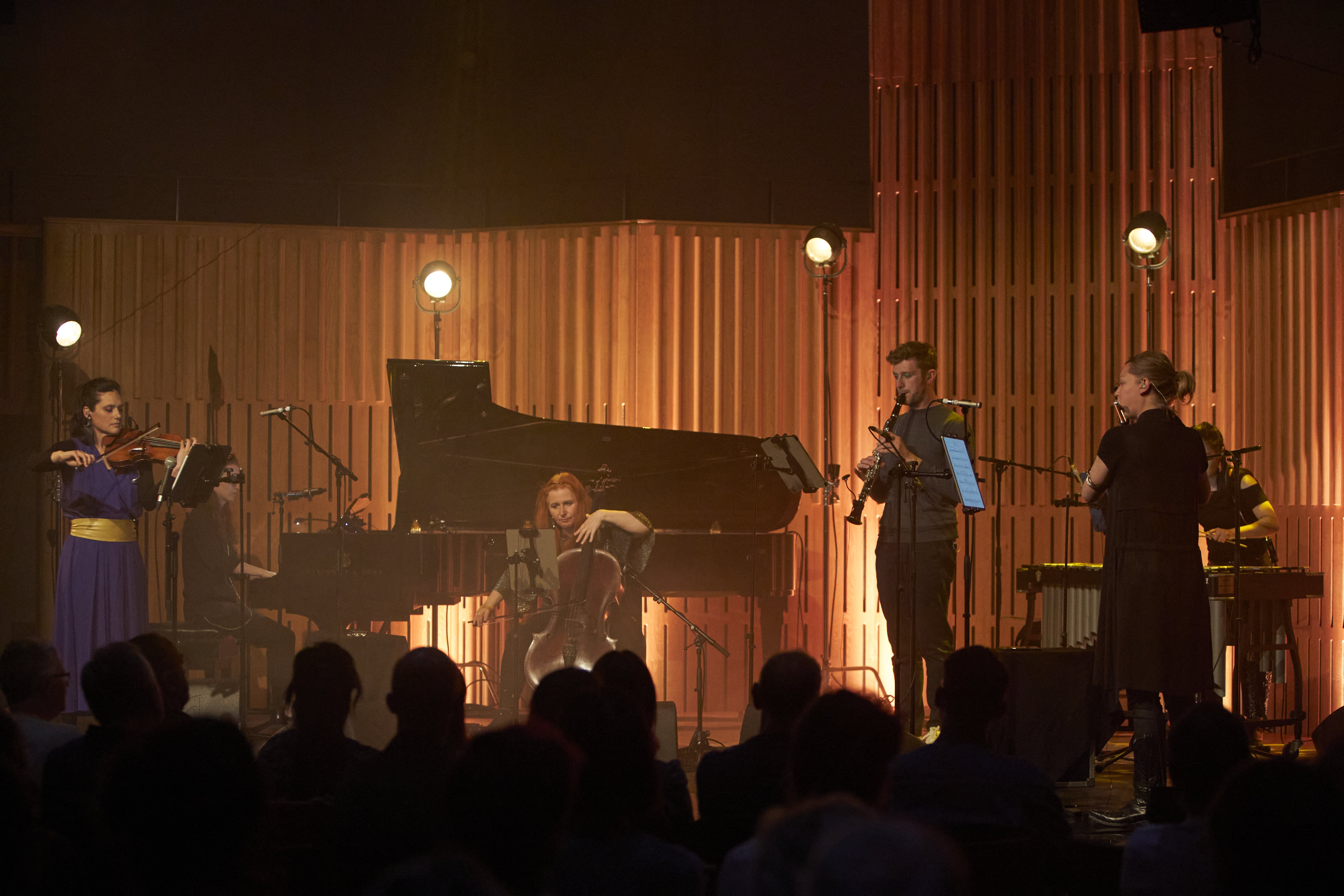 The programme opened with a complex and sensitive collaboration from composer Daniel elms and choreographer Alexander Whitley, with performance from dancers Hannah Rudd and Jonathan Savage.

Titled ‘The Age of Spiritual Machines’, the piece explores the rapidly evolving and complex philosophical movement that is transhumanism. The musicians and dancers created a tender, beautiful, but also disconcerting moment – as the shifting dynamic between human and machine was explored. Rudd and Savage – employing principles of machine intelligence, were incredible in the way their movements and relationship to each other appeared informed by technology, rather than how the human gaze sees the world. The cello and violin of Joe Zeitlin and Eloise Macdonald-was ethereal.

Following the performance of Elms’ new work – and typical of a Manchester Collective gathering –composer and choreographer were joined on stage by Music Director and Lead Violinist Rakhi Singh, for an insightful Q & A. Singh, who’s intrigued by the creative processes of other artists, was quick to ask how the project had come about. Daniel Elms explained that he’s wanted for some time to work with a choreographer. He explained: “I asked around – and a few people recommended Alex. He’s an excellent choreographer and he implements a lot of technology as part of his creative process, which I’ve started doing since 2015. And so there was a kind of resonance or symbiosis there.”

Elms explained that one of the reasons he’s started to use technology as part of composition, is because he sometimes finds it difficult to talk to people in certain circumstances: “It can be intimidating working with groups of musicians – and sometimes I don’t know the answers and I need to find it.” The composer’s candour about his own mental health challenges and how that interplays with his work was a key moment in the entire evening. How inspiring to be in the same room as this excellent composer. Artist. And Bloke.

The second piece of the performance was written by Hannah Peel for Manchester Collective in 2021. ‘Neon’ – has only been performed publicly once before. It included atmospheric field recordings captured at Shinjuku Station in Tokyo, that added a further element of technical brilliance – courtesy of the Collective’s sound and live electronics maestro, Joe Reiser.

The composer explains her inspiration: “Neon lights are fascinating – a symbol of the city at night, iconic landmarks that are ever present through smog, rain, in film and still-imagery… Decadent and bustling, yet also with a taste of loneliness. It’s an art form born of breath, heat and a spark. When I started looking into the stories of neon manufacturing and how the once humming industry was quickly vanishing – being set aside for faster, brighter and cheaper materials – it felt like the right story to explore that collective memory. It’s a piece with three distinct movements, almost fading into one another, eventually disappearing into the atmosphere. There is a closely interwoven interplay between the acoustic instruments and the digital ‘tape’ performer, which I hope allows for a reflection on the presence and value of the hand, as we move ever quickly forward in the future.”

Lyra Pramuk’s ‘Quanta’ was the penultimate piece of the concert and was a work created after reading quantum physicist Carlo Rovelli’s ‘The Order of Time’. The work asserts: “There is no universal time. Instead each of us has an individual sense of how time traces through our lives.”

The final work of the programme was ‘Double Sextet’, written in 2007 by Steve Reich. A Pulitzer Prizewinner, it’s a well-regarded and renowned composition. The arrangement for the Leeds audience was for six musicians, with a recording of the second part – by the same Collective musicians. “We’re sort of playing with, or against our ghost-selves tonight” explained Rakhi Singh, who went on to suggest the team might well have formed new cognitive functions by learning the piece.

An almost expected and always eagerly anticipated element of a Manchester Collective performance is the interaction with the musicians, who deconstruct and de-mystify their playing in such a way that even the most hard-of-thinking feel included. Rakhi Singh did this perfectly tonight with her explanation of Reich’s practice. If only she was responsible for delivering the UK’s entire ‘A’ Level syllabus. Can you imagine?

For Leeds, Manchester Collective were:

22 May – Stockport – Where The Light Gets In