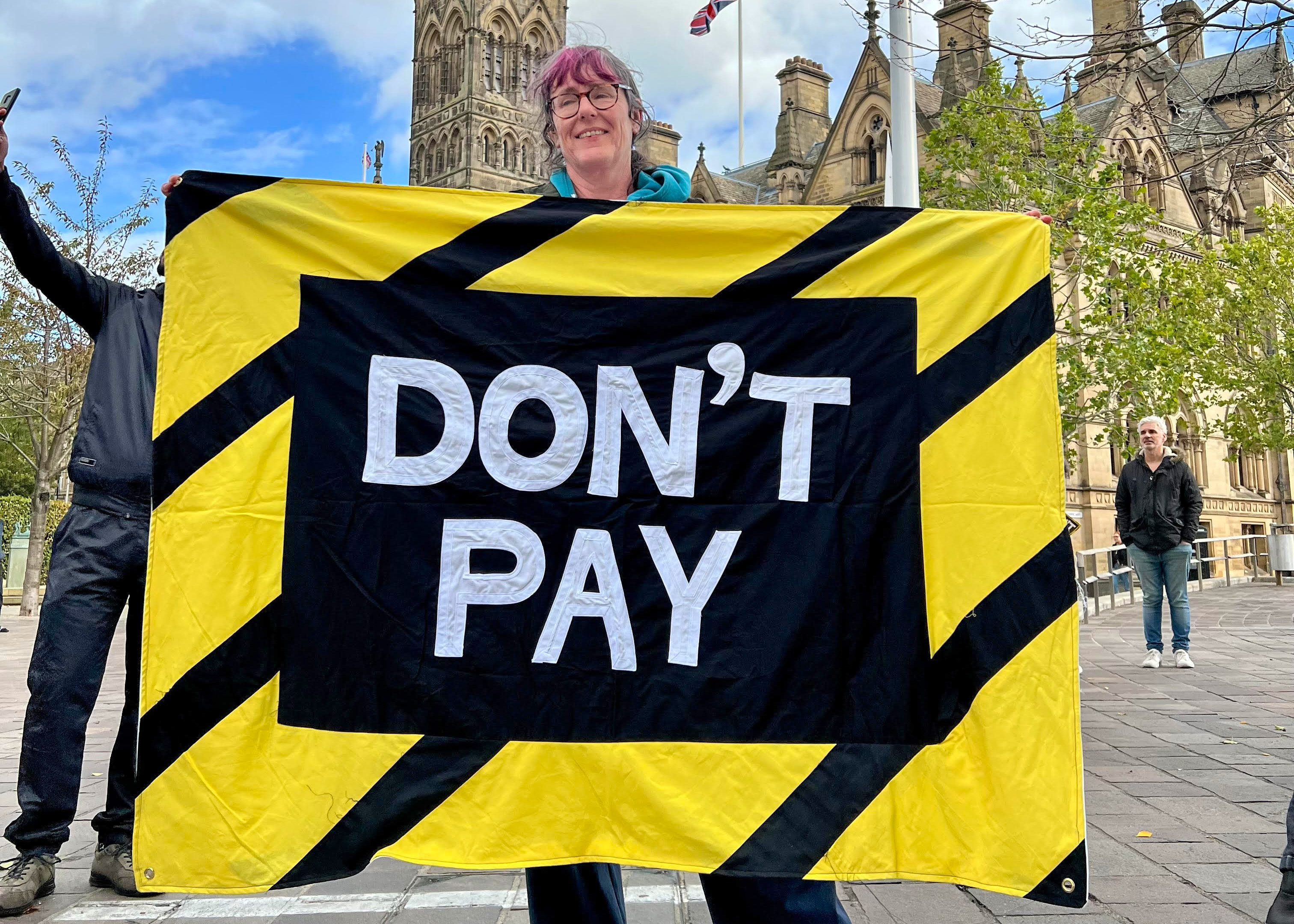 You could be forgiven for believing that Bradford’s City Park had been especially ‘zhuzhed’ yesterday: perhaps to feature in a regional tourism campaign? Maybe to reinforce to us Northerners that ‘life is good’ and we should be grateful? But no…it’s just Bradford. It always looks like this. It’s majestic.

However, as countless litres of water spurted into the air from the largest urban water feature in the UK, reflecting the bluest of blue autumn sky in the Mirror Pool, it is perhaps ironic that Mag North was in the former ‘Wool Capital of the World’, to join protestors anxious to voice their concerns over the current energy crisis.

The memo (and threat of prosecution) regarding the hosepipe ban that most of us are currently complying with across huge parts of the country, obviously has yet to reach the person in charge of the taps at Bradford MDC, because you could have filled quite a few kettles (new or otherwise) on Saturday with the H2O that was supplying the backdrop to a gathering of perfectly sensible, rational and intelligent folk keen to voice alarm about the runaway train that is the UK’s energy costs, policy - and disconnect between the extremely wealthy – and the rest of us.

October 1st was a day of action by dontpay.uk – a growing, national grassroots movement that is demanding a fair price for energy for everyone.

Along with Bradford, thousands attended similar rallies in Darlington, Hull, Manchester, Lancaster, Huddersfield, Ellesmere Port, Blackpool and York, on a day when ‘Enough is Enough’ was the cry from unions, campaign groups, climate campaigners and members of the public, finally forced to take a stand against an unsustainable future.

While the central issue concerning dontpay.uk is simply that millions of us won’t be able to pay our energy bills this winter, the event in Bradford attracted many concerned people who understand that this fact is part of a much greater social crisis.

Ryan, who works in Mental Health Services and had joined the campaign because of his worry for his community, was unambiguous: “I see it first-hand. People can’t cope any longer. Mental health services were already at breaking point when the pandemic hit – and now if you can’t feed and keep your family warm, what is that going to do to you?

“While I would say I am politically ‘engaged’ – I just know this cannot go on. People are going to die in their homes while energy firms continue to profit”

Adi - a forty-something South Asian man, is concerned about his community: “Our young people in particular have been seduced by consumerism. They don’t understand the effect that their choices are having. At the same time there is a growing unrest amongst their parents generation about what is wrong and who should be blamed.”

When asked what he does for a living, Adi is initially evasive, but confirms he runs his own business. “Not a big business. Not billions of pounds” he is quick to explain.

As we were speaking, a brazier was lit and a well-meaning and not remotely intimidating chanting struck up from the crowd. A young woman moved among the crowd, handing out photocopies of energy bills, inviting us all to join in burning them. Adi was concerned: “I don’t like the idea of just burning paper. I understand the sentiment – but I will take mine home and recycle it.” Adi is an example of the ‘switched-on, compassionate, intelligent and thoughtful’ people that perhaps in our darkest moments, we might believe don’t exist anymore. They do. They’re in your community. They live on your street. Seek them out.

‘Don’t Pay’ are urging us to gather together and stop paying our energy bills, in a bid to force positive change. Their manifesto confirms they will only do this if 1 million people pledge to take part: ‘So we can protect ourselves and each other.’

While the Bradford rally may have attracted fewer numbers than events in its Leeds and Manchester neighbours, the message was unequivocal: ‘We are all part of something bigger – and if we don’t work together – and look after each other, as a nation, we are in trouble.’

Bev – a recently retired teacher had wanted to bring her granddaughter Maisie along, but her daughter [Maisie’s mum] had forbidden it. “I am so worried about this generation that should be taking a lead now. They’re sleep-walking into an abyss. As long as they’ve got Netflix and a settee to sit on – they don’t seem to want to take the ‘blinkers’ off. They’re not thinking about her [Maisie]. If I was young again, would I be starting a family? I don’t know."

While quick to assert there are no ‘leaders’ at the Bradford event…we also talked to Anna, who has clearly been closely involved in making this particular West Yorkshire group a success. Again, obviously engaged in standing up for what she sees as ‘right’, she doesn’t consider herself to be an ‘activist’. “I just know that this can’t go on” she confirms. Anna is an NHS nurse – and it could be argued that those working in health and social care are better placed than any of us to see the real and immediate effects on the population of government policy: “It’s disproportionately the poorest who are being hit the hardest again. We have to look after each other” she explains.

Another Nurse, who asked not to be named, added: “How is it possible to give your best to those in need, in a clinical setting [at work] – when you go home and feeding and keeping your own family warm is a worry and a challenge? I wouldn’t describe myself as a ‘Socialist’, but why is socialism seen as a threat? It’s just about looking after each other isn’t it?”

On an October day when the ideological differences of Mick Lynch and Liz Truss are being brought into ever sharper focus across the country, in the North it seems clear whose belief system is more likely to protect the majority.