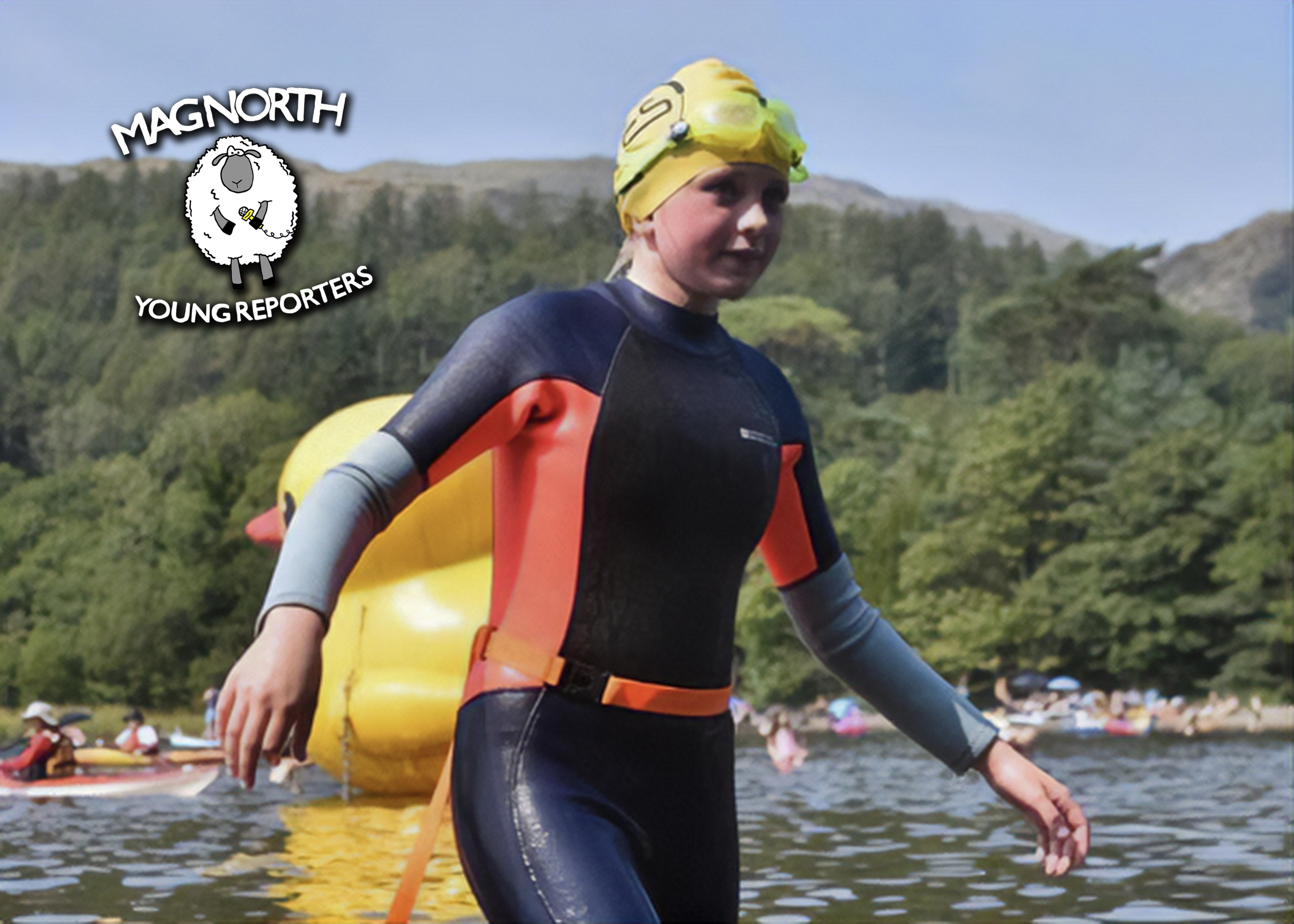 What is an Open Water Swimmer?

For one thing, it’s (mostly) much colder. You wade in and your nose snaps off and your elbows freeze and you scream and splash and shake. That’s the bit where you're meant to run out grabbing your towel and go home for a cup of hot chocolate. That’s what normal people would do. That’s what sane people would do.

The Start of the Chaos

So that fateful Lake District day in August, me and my mum stood nervously in the pen of open water swimmers and I felt quite like a Herdwick sheep in the midst of a flock. It was very hot and the water was warmer than usual. I was regretting my decision to wear a wetsuit.

We were all going in at once in what they call a wave. I had my special yellow swimming cap on my head and my special tracker thing called a dibber on my ankle. Why they call it a dibber is lost to me but I didn’t really have time to dwell on it. We were all at once called into the water and I was pushed about in the crush of the crowd. Once again I got the impression that we were a flock of sheep being herded about.

It was too fast and frantic for me. I like to slowly get in, dipping down to my hips and then to my shoulders, waiting until I’m completely comfortable before I start swimming. I gave up on that dream as soon as I saw where we were meant to start. It was a deep water start, but the lead up to it was much more difficult than I expected. It was so shallow and then dropped so quickly that you had to get right down straight away and start swimming. In the hurry I fell down to my knees and started swimming breaststroke straight off.

We all gathered around the big floaty thing where we were starting and the countdown began. Five, four, three, two, one…

Some huge goose or something honked to announce the start, or maybe a very big trumpet. I flailed about, my arms smacking people in the face, desperate to find mum but also scared I would be left behind. Someone’s foot kicked me up the nose and I coughed and gasped. At the very worst moment mum jerked me back and I snorted up a great deal of Coniston lake water. I spun round and located her, flopping about like a fish on land, or maybe more accurately a human in the water, we slotted into the stream of people front-crawling past and began at last.

So not the best start I guess.

The swim was relatively uneventful, apart from the weeds. It was so shallow in some parts that I could see right to the bottom of the lake. The water was clear and hardly dirty but in some way that was worse. Through the darkness the tangles emerged like great green ghosts of the lake. They rose in swirling clumps and their tendrils reached and grabbed at my legs and bits of uprooted weed wrapped around me and I swear someone sabotaged me by throwing a strand on my goggles. Or maybe I’m just paranoid.

Either way, these weeds were not ideal and there was no escaping them. Breaststroke was your safest option and even then your limbs caught and coiled up like the lake was trying to knot you into it and keep you forever. And front crawl was awful. There you would be, looking down into the blackness of the water, enjoying the cool soothing your hot skin, and then you’d pull your arms over and get completely swamped in weed. It just sprung upon you and entwined itself around you.

I had to drag my arms through the murky muddle over and over again, sometimes ripping up whole clusters of the stuff. It was bizarre and tiring and probably strangely entertaining if anyone were to see me. It wasn’t a problem for most people because they just glided through the water. I have that extravagant way of swimming and it was the main source of the fiasco. I’m going to have to change my stroke I suppose.

So yes, the swim was uneventful.

When me and mum stumbled out of Coniston Water dripping wet, with our mouths stretched to our ears for the cameras, we were confronted by three very serious looking barrels of water with some suspicious looking liquid inside. Bits of weed and dirt floated around in them.

A woman wearing an official looking hi-vis was yelling “Take your wetsuits off here pleeeeaaaaassseeee!” in a very commanding voice. She was like a circus ringmaster rolling up customers. When mum inquired, she replied at the same volume “Stop the spread of foreign weeds by dunking your wetsuits here!” I was confused for a moment, and then it dawned on me.

I had always known.

Right from the beginning.

As soon as I had started swimming,

The Weeds were evil.

They latched onto your wetsuit and held on, and if you went swimming anywhere else they dropped off and started to spread. That’s why they were so eager to twine around me.

I pulled off my wetsuit determined to beat the foul beasts, but the water in the barrel didn’t seem very clean anyway. Fifty people before us had dunked their infested wetsuits in there and now it was full of the horrible contamination. I was going to walk away but the woman was glaring at me so I dipped my suit in. It felt like a sheep dip, if we were all the flock of sheep. You know, when the farmers dunk their sheep in stuff that gets rid of parasites. But it wasn’t really getting rid of anything.

I think I’ll just wash it at home.

I Am An Open Water Swimmer

From an outsider's perspective it probably just looked like a bunch of crazy people splashing about in the water and swimming in a square. From an insider’s perspective it looks like that too. But it’s changed a lot for me. I think I now class myself as an open water swimmer after all.