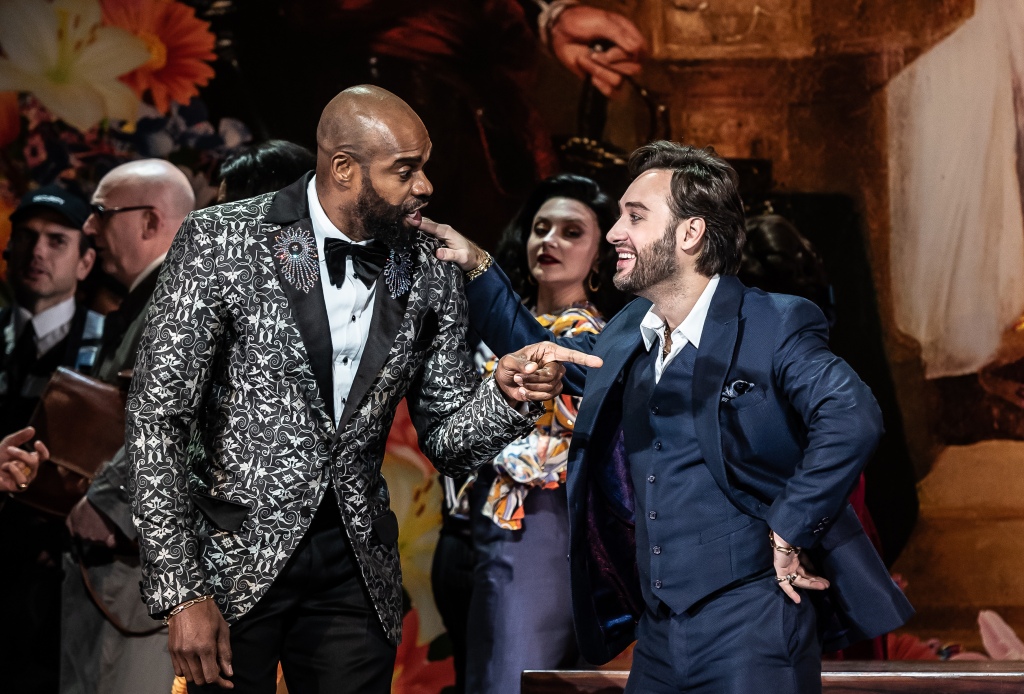 Giuseppe Verdi’s deformed court jester Rigoletto was transformed last night in central Leeds – and as a consequence, will become Opera North’s latest heavy-weight success. This tale of a father’s desperation to protect his daughter, has been masterfully re-worked by British-Nigerian theatre artist Femi Elufowoju jr, who makes his opera directing debut with Verdi’s interpretation of Victor Hugo’s Le Rose s’amuse. Elufowoju jr first encountered Verdi’s work as a Bretton Hall student. That has to be noted.

This production maps identity and inequality onto a contemporary canvas. Elufowoju jr: “I am Black African and much of my work is influenced by my ancestry and culture. There are strong visual resonances of the continent in this production, from ancestry and allegiance to mythology and curses. Monterone’s curse is a key driver of the narrative. As someone of Nigerian heritage, I want this moment to resonate in a specific way for the characters whose ethnicity has familiarity with the ‘curse phenomenon’. I want this production to highlight the potency and credibility of that connection.”

“Rigoletto, Gilda, Monterone, Marullo and the Countess Ceprano will be sung by people of colour. These characters would know the power and impact of the curse from the moment Monterone delivers it. On a global level and from time immemorial there have been ramifications for being Black in our world. Our setting is Mantua. Mantua now, Mantua U.K. And though this is a story principally exploring themes of parental love and vengeance; our characters experience life rooted in the politics and culture that has evolved through generations.”

Rigoletto marks the welcome return to Opera North of American baritone Eric Greene, taking the title role following his compelling 2019 performance as Amonasro in Aida. His expressions of pain, torment and fear, were delivered with a reality not often witnessed.

The acclaimed Jamaican-British bass-baritone Sir Willard White, returns to Opera North as Count Monterone and issues his dreaded curse with a power that leaves the stage and inhabits the Grand Theatre audience.

Jasmine Habersham makes her Company debut as Gilda – and is magnificent throughout. The final scene for both father and daughter is heart-rending. People and knives…just stop.