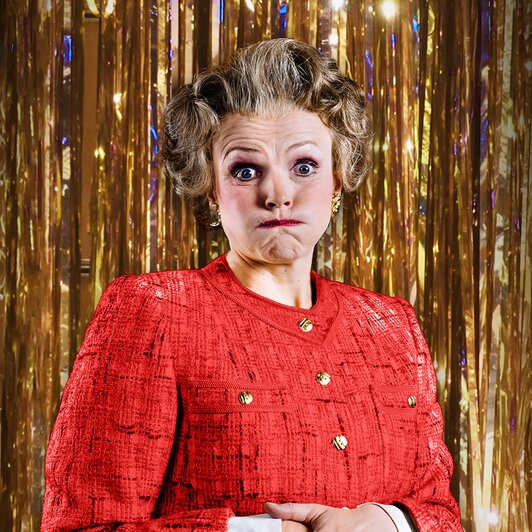 She’s the former Tiller Girls dancer from Dewsbury who appeared at the London Palladium, and went on to become an MP and Britain’s first female speaker of the House of Commons.

We know Betty Boothroyd is a star in many firmaments, and now her life is to be celebrated by one of our northern heroes of the stage, the inimitable Maxine Peake.

BETTY! A SORT OF MUSICAL is a brand-new production, written by and starring Maxine Peake and Seiriol Davies, and directed by former Royal Exchange Artistic Director Sarah Frankcom.  Peake and Frankcom have established a formidable creative partnership, developing some of Manchester’s most ground-breaking stage work from THE SKRIKER to THE MASQUE OF ANARCHY and most recently THE NICO PROJECT.

Joining them for BETTY! A SORT OF MUSICAL is the award-winning writer, composer, and performer Seiriol Davies. The cast is completed by Carla Henry, Lena Kaur, Joan Kempson and Eva Scott.

Sharp and funny, BETTY! is a celebration of the human spirit, a joyful and uplifting reflection of the gumption, bravery and strength it takes to speak out. Opening on Saturday 3 December the production runs until 14 January 2023.

It’s set in a small village hall where the Dewsbury Players (Yorkshire’s most passionate, dedicated and inventive amateur-dramatics society) have come together to celebrate their most eminent local hero, Dewsbury-born Betty Boothroyd, the first female Speaker of the House. Meredith, her daughter Angela, three equally devoted women (and Calvin), are ready to create the most awesome musical Yorkshire has ever seen.

Emboldened by their heroine's indefatigable tenacity, this amateur group prove themselves to be extraordinary women on and off stage. At a time when everything seems so polarised, BETTY is a celebration and for the Dewsbury Players it is a tribute to the unexpected rewards that can come from thinking outside of the dispatch box.

Seiriol Davies [pronouncedSAY-re-OLL] is an award-winning writer, composer, songwriter and performer from ruralest Wales. They make fierce, camp musicals that attack knotty political questions in a cloud of glitter. In 2022, they were selected as one of The Stage newspaper’s 25 figures to shake up the theatre landscape in the next 25years.

Bafta nominated actor and writer Maxine Peake is making a happy return to the Royal Exchange. Her credits for the theatre have included HAPPY DAYS, A STREETCAR NAMED DESIRE, THE SKRIKER (MIF15 and BBC Radio 3), THE MASQUE OF ANARCHY (produced at the Albert Hall for MIF13), HAMLET and MISS JULIE plus the beautifully funny QUEENS OF THE COAL AGE as writer (also for BBC Radio 4).

She is as celebrated for her screen work as she is for her work on stage, and her film credits include FUNNY COW, Mike Leigh’s PETERLOO, James Marsh’s THE THEORY OF EVERYTHING, Thomas Clay’s FANNY LYE DELIVER'D, and James Strong’s upcoming MOTHER RUSSIA and DANCE FIRST. Her work on TV includes the stunning ITV drama ANNE, plus RULES OF THE GAME, THREE GIRLS, SILK, THE VILLAGE and DINNERLADIES (BBC), BLACK MIRROR: METALHEAD (Netflix), SHAMELESS (Channel 4) and THE BISEXUAL (Hulu / Channel 4). Maxine's other writing credits include stage and radio play BERYL (BBC Radio 4/West Yorkshire Playhouse/The Rose Theatre) and THE LAST TESTAMENT OF LILLIAN BILOCCA(Hull Truck Theatre).

Director Frankcom returns to the Exchange for the first time since stepping down as Artistic Director in 2019. During her award-winning tenure her work for the Exchange’s unique stage included the world premiere of LIGHT FALLS by Simon Stephens WEST SIDE STORY, DEATH OF A SALESMAN with Don Warrington, HAPPY DAYS, A STREETCAR NAMED DESIRE, THE SKRIKER (MIF15 and BBC Radio 3), THE MASQUE OF ANARCHY (produced at the Albert Hall for MIF13), HAMLET and MISS JULIE all with Maxine Peake, plus OUR TOWN (winner of Best Director at the UK Theatre Awards), ALL I WANT IS ONE NIGHT, BLINDSIDED, THAT DAY WE SANG, BLACK ROSES, THREE BIRDS, ORPHEUS DESCENDING, BEAUTIFUL THING, A VIEW FROM THE BRIDGE, WINTERLONG (by Andrew Sheridan winner of the Bruntwood Prize for Playwriting), PUNK ROCK (by Simon Stephens, winner of the MEN Award for Best Production), BLITHESPIRIT, THREE SISTERS, ON THE SHORE OF THE WIDE WORLD (by Simon Stephens, winner of the Olivier Award for Best Play) and KES.

Work elsewhere includes most recently THE BREACH (Hampstead Theatre), THE NICO PROJECT (co-created with Maxine Peake for MIF 2019), THE LAST TESTAMENT OF LILLIAN BILOCCA (Hull City of Culture). Her work has also been seen at the National Theatre, the Bush Theatre, the Lyric Hammersmith, the Soho Theatre and the Crucible, Sheffield.