Orpheus In The Record Shop

Testament: the Rapper, Beatboxer and Playwright heads back to Leeds Playhouse this weekend with Opera North
Mag North.
October 11, 2022 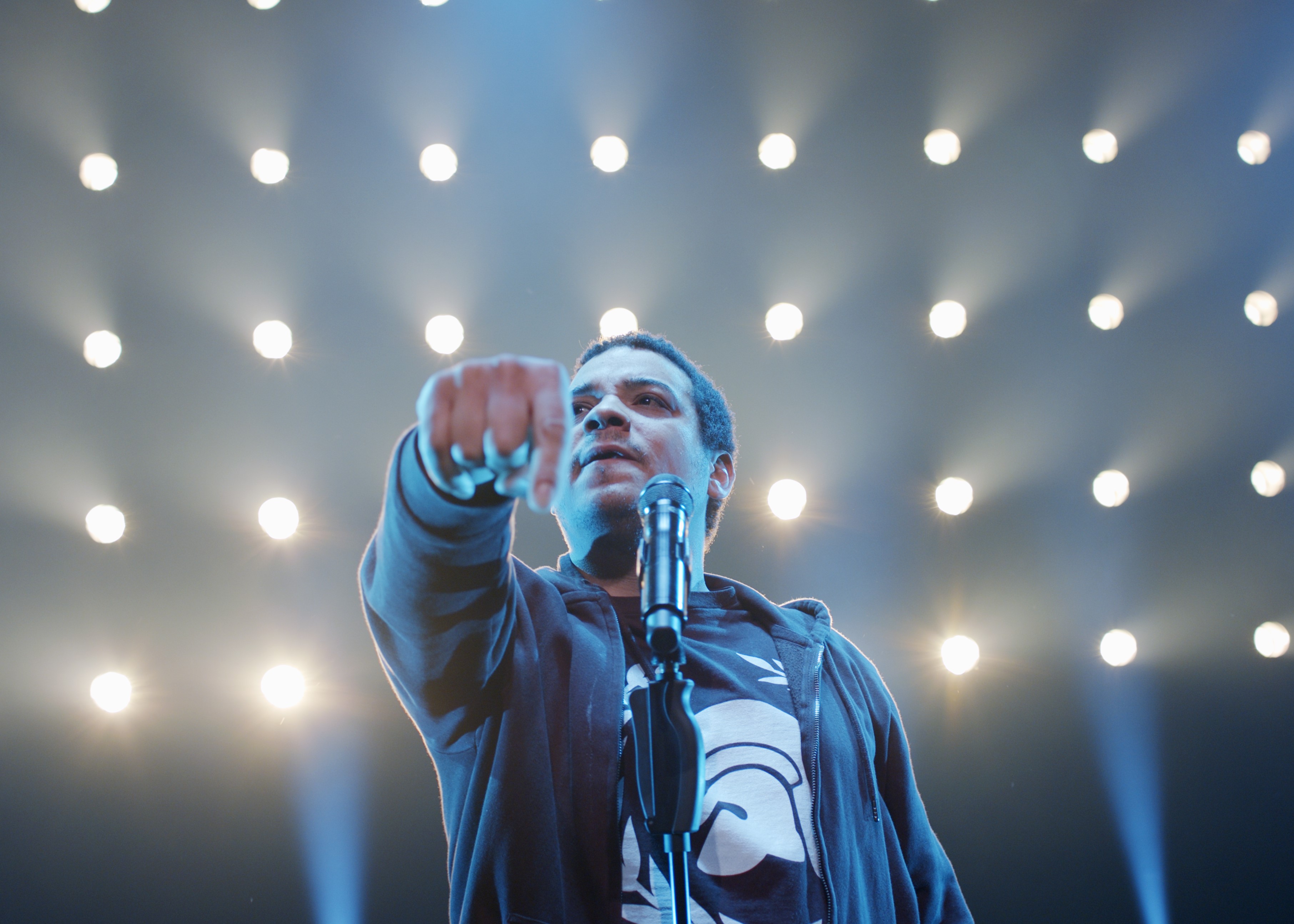 Acclaimed rapper, playwright and world record-breaking beatboxer Testament is making a triumphant return to the Quarry stage at Leeds Playhouse this week with his hit show Orpheus in the Record Shop.

After a successful socially-distanced run at the height of the pandemic, which was filmed for BBC Four’s Lights Up series, the Leeds Playhouse and Opera North co-production is back from 13-15 October, showcasing the astonishing skills of this multi-talented writer and musician and featuring members of the Chorus and Orchestra of Opera North, including soloist Helen Evora.

Orpheus in the Record Shop had a brief run at the Playhouse as part of Connecting Voices and was filmed by the BBC for its Lights Up series. Why is it important that audiences get a chance to see it live again now in our biggest theatre space?

Performing this show live is bananas! A classical ensemble live on stage, with beatboxing, spoken word and comedy – it’s a unique thing to be part of. I’ve been telling all my friends and family to come along because it’s funny and ends up like a real party. Doing it on the legendary Quarry stage at Leeds Playhouse is not only a massive honour, it’s also big enough to turn this very specific and human story into a festival.

What is it about the Orpheus story that struck a chord with you and made it feel relevant to modern life?

The Orpheus mix has been reworked and remixed over the centuries – there’s even a difference between the Greek and Roman versions. There are some operatic versions that are heartfelt meditations on loss like Gluck’s Orpheus & Eurydice (1762) and then there are bawdy comedy versions like Orpheus and the Underworld (1858) where we get the can-can from. Every generation takes myths and reuses them to talk about their time. Anyone who sees this Orpheus will recognise the themes in it for sure.

Why do you think the classic Greek myths still resonate so deeply with contemporary audiences?

The myths are really dramatic and are often literally operatic. The stakes are high, the imagery is rich. They are amazing vessels for allegory and reflection. In fact, when we tell these tales, the meaning we draw out of them really reflects where we are now.

Is the record shop your character owns based on a real shop?

No, the record shop isn’t based on a real shop specifically. But I’ve got to shout-out Tony Green of Released Records in Leeds Corn Exchange, who was super generous in guiding me through the technicalities of what running a shop is like. Snarky Orpheus himself is more based on some of my worst prejudices as a music collector and the heartbreak and loss I’ve experienced over the years.

Do you have fond memories of rummaging through stacks of records in your favourite shop as a youngster?

Yeah, 100%. Without independent record shops I don’t know where I’d be as an artist; not simply as a composer and musician but also in terms of widening my worldview. Jumbo and Crash in Leeds were hugely instrumental (pun intended) in introducing me to new work, letting me know about gigs I could go to and – vitally – for meeting other musicians. The first time I listened to Gil Scott-Heron’s poetry was at Jumbo in the Merrion Centre, where I also picked up some mad French funk music. When I started releasing records myself, I can remember the pride I felt seeing my first 7 inch featuring Corinne Bailey Rae and Soweto Kinch in the singles section.

Can you pass a record shop now without popping in to see what treasures it might hold?

Standard. I’ve got to pop in. It’s funny because not only do I end up picking up a record or a T-shirt, but I usually end up chatting with someone too and learning a bit more about what and who’s poppin’ in the different scenes – rap, punk, jazz – all sorts. Leeds is really rich in that regard.

You are performing on stage with members of Opera North’s chorus and orchestra. What extra dimension does that give to your performance, and to the production as a whole?

The wall of sound those musicians can create is extraordinary. These are some of the best musicians in the country and it’s a privilege to work with them. They just make the music – and the whole room – soar.

You were born in London but were brought up in Manchester and now live in West Yorkshire. Do you feel that the rhythms and attitude of the North are strongly reflected in your work?

I’m an adopted Yorkshireman now. My wife and kids are from Yorkshire and I’m really proud to be part of the community here. The North has got a unique perspective on the world. Whether it’s Manchester’s swagger or Yorkshire’s stubbornness, the dry humour is always there. The show is full of these vibes.

Not only are you a world record breaking beatboxer and hip-hop MC, but you are also an award-winning writer and theatre-maker. Do you favour one discipline over the others, or is it all about words for you (in whatever form they appear)?

I love performing and connecting with people. Writing is the recipe that makes it happen, but it’s seeing the work served up and sharing it that makes me buzz the most. I love stories – and I’m not fussed how they are made, as long as we connect and inspire each other.

Music and words are obviously at the heart of what you do – can you see a full-blown musical in your future?

Yes, I’m currently working on two musicals. One is based around late 60s early 70s’ soul music in the US, and the other is a live jazz/spoken word musical set on the Lancashire-Yorkshire border where the show will be different every night. Keep your eyes peeled!

Orpheus in the Record Shop runs at the Playhouse from 13-15 October. What can audiences expect to see (and hear)?

Expect an uplifting story, loads of laughs, impersonations, mad beatboxing and looping, some deep poetry and a soundtrack from Opera North that will lift you out your seat.

What conversations do you hope the show prompts?

What’s next for you?

I’m adapting a novel for BBC Radio 4 and writing on a new Netflix anime show. Both are due to land next year.

Testament is a hip-hop MC, writer, theatre maker and world record breaking human beatboxer. Born in North London and growing up Manchester, he moved on to study in West Yorkshire, where he now lives. As a lyricist, his critically acclaimed work brings together rap, song and spoken word. Testament’s work includes the celebrated hip-hop album Homecut: No Freedom Without Sacrifice, as well as several spoken word performances for BBC TV and BBC Radio (1xtra, Radio 4 and 6Music). In 2019, he was Channel 4 Writer in Residence at Royal Exchange Theatre Manchester.

Testament’s debut Radio Play for BBC Radio 4 The Beatboxer was shortlisted for The Imison Award at The BBC Audio Drama Awards 2020. He also penned the play Black Men Walking, nominated for Best New Play at the UK Theatre Awards and Best Play at the Writer’s Guild Awards. Produced by the award-winning Eclipse Theatre Company and the Royal Exchange Manchester, it toured nationally in 2018 including the Royal Court. Testament was also the Musical Director of the touring show Skip Rap with Mind The Gap artist Alan Clay.

He has worked with a diverse range of people from Archbishop Desmond Tutu to Grammy winner Corinne Bailey Rae, Ray Parker Jnr, jazz legends Joe Lovano and Jean Toussaint, Mercury nominee Soweto Kinch and the originator of hip-hop himself DJ Kool Herc. He also won the BBC Urban Music Talent Award in 2007. In 2015, he wrote his first show, the acclaimed play Blake Remixed – a personal response to the work of William Blake, which had a successful run at the Edinburgh Fringe Festival 2015.

Testament's poetry has been published in several anthologies and has been used as a teaching resource in the UK and in more than 25 countries around the world. He is also an international workshop facilitator, founding workshop company Hip-Hop Clinic in 2014, working in venues that range from schools, universities and stadiums to prisons and park benches. His work as a poet coach includes BBC Radio 1, BBC 1xtra, The Roundhouse and Apples & Snakes.

Testament was also a judge for The BBC Young Writers' Award with First Story & Cambridge University in 2019.