Phoenix at 40: A birthday party not to be missed. Phoenix Dance Theatre and Leeds Playhouse. 9-12 February.

Phoenix at 40: A birthday party not to be missed. Phoenix Dance Theatre and Leeds Playhouse. 9-12 February.
Colin Petch.
February 2, 2022 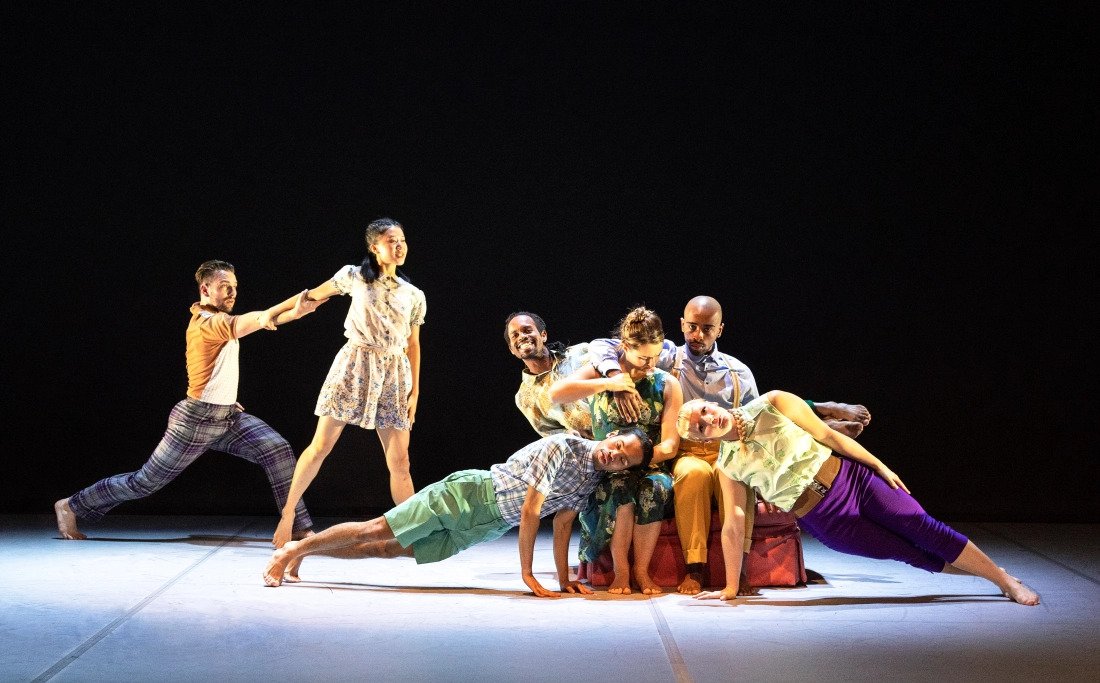 1981 was a year of extremes. In Brixton, ‘policing’ of a particular kind highlighted the inequalities within our communities. Charles and Diana walked down the aisle at St Pauls and an arrest in Toxteth, Liverpool was the spark for weeks of rioting across the UK. The USA got MTV and in November of that year, the British Isles recorded 105 tornadoes in a single night. Crikey.

Their enthusiasm for dance had initially been nurtured and encouraged by a teacher by the name of Nadine Senior at Harehills Middle School – (yes that Nadine Senior, the quite brilliant founder of the Northern School of Contemporary Dance) – before they later came into the orbit of two more inspirational members of staff at Intake High School: Charles Gardener and John Auty. The pair further reinforced in the young lads that ‘the sky was the limit’ and they could achieve whatever they wanted.

Working initially in educational settings, their dynamic approach to contemporary dance rapidly won them fans far beyond the city and the region. By 1987, the Company had a permanent base at the Yorkshire Dance Centre in Leeds city centre.

International tours, diverse mixed programmes of work and partnerships with boundary-pushing artists and organisations across the globe followed and by 2009, Phoenix had established themselves as the leading middle scale dance company in the UK. Their commitment to produce dynamic and relevant work that embodies the organisation’s rich Caribbean history and shines a light on cultural narratives which are often overlooked or untold, makes them one of West Yorkshire’s most important arts organisations.

In October 2010 Phoenix Dance Theatre moved into purpose-built new premises in the Quarry Hill area of Leeds alongside Northern Ballet, establishing an elite crucible for dance, while at the same time still being embedded in the very community that had provided the platform for their success.

In 2021, award-winning dancer and choreographer Dane Hurst became the Theatre’s eighth Artistic Director – and after four decades at the very forefront of contemporary dance, it’s now time to celebrate with a series of special birthday events to mark ‘turning forty’!

The celebratory events, hosted by the fantastic folk at Leeds Playhouse from 9–12 February, include:

Pave Up Paradise – Lost Dog’s dynamic, sensual and confrontational duet revisiting Adam and Eve after their fall from grace.

Heart of Chaos – Choreographed by Phoenix’s former Artistic Director Darshan Singh Bhuller, this captures the spirit of boxer Jack Johnson, the first African American heavyweight champion of the world, who challenged the segregated sport and white America in the era of Jim Crow and the Jazz Age.

Signal – Henri Oguike’s unflinching and powerful piece embracing both the frenzy of the battlefield and the calm at the centre of the storm.

Family – Choreographed by Shapiro and Smith, this satirical fly on the wall dance, elegantly captures the complexity of human interaction and ordinary passions that define family life.

Harmonic Breakdown – In Jane Dudley’s masterpiece, a lone female dancer creates a poetic representation of an individual’s struggle to gain self-respect and dignity in a cruel, volatile world.

Phoenix Dance Theatre hosts a one-off Birthday Celebration Gala featuring repertoire from the Company as well as a host of special guest performances from celebrated and award-winning artists and dance companies from around the UK.

Dane Hurst, Artistic Director of Phoenix Dance Theatre, said: “The 40 Years of Phoenix programme encapsulates the depth, breadth and complexity of dance in five key works that is a distillation of the energy, exuberance and spirit of Phoenix through the decades. The first half of the programme opens with the powerful and intense Signal by Henri Oguike set to a thumping Taiko drumming score followed by the immense and impactful Harmonica Breakdown, a solo by the legendary Jane Dudley set to blues music. Closing the half is a satirical and poignant Family by American choreographic duo Shapiro and Smith.”

“The second half opens with a touching and theatrical duet set to live music, Pave Up Paradise, by the award-winning team Ben Duke and Raquel Messeguer of Lost Dog, and we close with the newly recreated intense and cinematic Heart of Chaos inspired by the story of World Heavyweight Boxing champion Jack Johnson. The work is set to a pulsating Jazz score by Wynton Marsalis and created by Darshan Singh Bhuller.”

Talking about the 40th Birthday Celebration Gala, he said: “The 40th Birthday Celebration Gala is a celebration of the impact and legacy of Phoenix Dance Theatre and a salute to the enduring power and relevance of dance within arts and culture. The Gala will feature performances from artists and companies from around the country, all coming together to share and celebrate the incredible depth, breadth and diversity of dance today. For one night only, audiences will get to see some of the best dance artists from around the UK coming together under one roof at Leeds Playhouse. It promises to be an unforgettable evening in celebration of 40 years of dance.”

Tickets and further information on this unique celebration are available from Phoenix Dance Theatre and Leeds Playhouse.