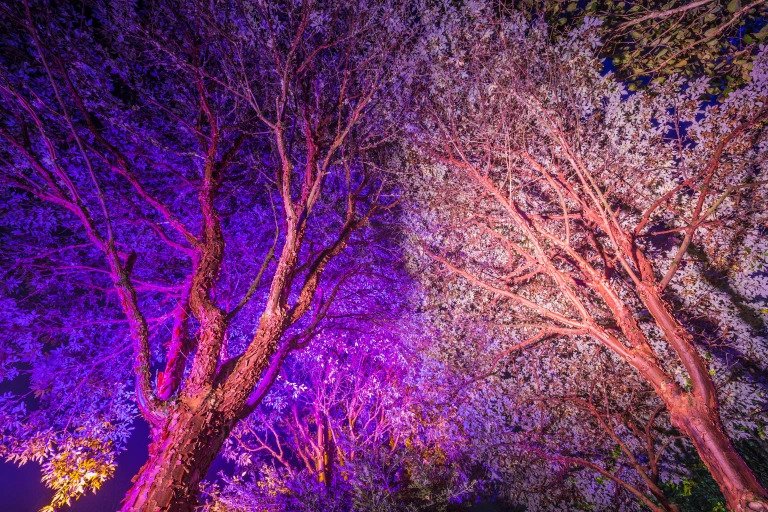 One of the most amazing things about RHS Harlow Carr, is that no matter what time of year you visit – there is something beautiful to see. If you were to visit every week, the changing seasons and the careful curation of this northern hotspot, would reward you with something new to marvel at on every occasion.

But majestic autumn colours, frosty mornings and gingerbread reindeer aren’t the only indicators in this part of North Yorkshire that we’re fast heading towards the festive season: On Thursday 21st November, the amazing folk at Harlow Carr flick the switch on ‘Glow 2019’, for a third year of illuminated magic, just as the sun sets.

Every Thursday, Friday and Saturday until 28th December (except Boxing Day), visitors can wrap-up-warm and from 4.30pm to 8.00pm, literally see the gardens in a new light.

Unlike some other attractions, you’re not going to find a poorly-lit elf, or Father Christmas with an electric cable disappearing up his trouser leg. Instead – thanks to the vision of lighting designer Robin Shephard-Blandy and his team, key areas of the 58-acre site are being thoughtfully accentuated, using a range of lighting specifically positioned to complement the existing exquisite colours in the garden.

Robin and his team have form. It was their efforts that have wowed crowds in previous years and their return seems to signal the official start of Christmas. When not skilfully picking out the detail of a Doric column our displaying an Acer griseum as never seen before, they’re also busy at RHS Wisley – in addition to providing much of the atmospheric lighting we love, as part of numerous UK theatre productions.

Use Up/Down Arrow keys to increase or decrease volume.

“The way we approached the lighting design, is primarily to light the winter garden, not to put spectacles together to go and see”, explains Robin during a break from last-minute checks.

“This year we’ve enhanced and extended the route through the productive garden, so we’ve been able to highlight some of the growing cages and some of the willow structures”. The pride in what they’ve achieved is palpable.

I’m intrigued by the amount of kit required to create a spectacle on this scale. Robin has the numbers to hand: “This year we’ve installed nearly 550 light fittings around the garden – and hundreds of metres of cabling – yeah it’s a great stroll”.

After a number of site visits throughout the year and a plan for colour-themed areas, the vision really comes together in the week before launch. This year everyone involved has surpassed themselves – and one trip to Crag Lane this winter, won’t be enough.

I can almost guarantee that you will have imbibed so much festive cheer on your ‘Glow’ walk, that unless you’ve joined one of the choirs performing festive tunes, you won’t be able to resist a hot chocolate and a Fat Rascal at Betty’s – and you may well get all your Christmas shopping done too, in the fab shop and plant centre.

If ‘Gather for Glow’ isn’t already a tradition in your house – this is the year to get started. It’s possibly the most fun you can have in the dark.

Thursday, Friday and Saturday throughout November and December (except Boxing Day).