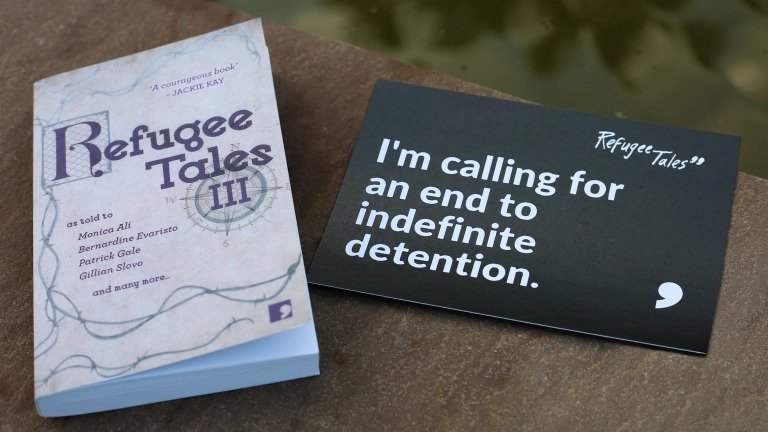 I would urge anyone with a social conscience to get a copy of Refugee Tales III (Comma Press) as quickly as possible.

If you are proud to be British and believe our stance on human rights is the envy of the world – you need to buy a copy post-haste too.

It’s so easy in a review, to ladle-on hyperbole about the subject in question, but when I say that Refugee Tales III is one of the most important – and damning books of 2019, it’s not because I’m concerned with using the right words to secure my next gig.

This book is a collection of ‘tales’ told to eminent writers, including Bernardine Evaristo and Gillian Slovo, by refugees who had hoped the United Kingdom would be their desperately-needed safe space. Slovo herself knows a thing-or-two about being a refugee: Her family came to London in the 1960’s – exiled from South Africa, because her father was the then head of the Communist Party.

I thought I was largely across the detention process for illegal aliens/refugees/asylum seekers. Like you – I’ve watched the documentaries about the realities of life in UK Detention Centres. That can’t be the norm though, can it? Read this book.

In January ’19, I was fortunate to be given an insight into the workings of a large Police Custody Suite on the outskirts of a great North-Eastern city. Initially, it what was I expected: Police staff who’ve heard it all before – and can’t wait for the end of their shift. Reassuring posters dotted around about the importance of ‘prisoner’ welfare. The grindingly slow access to justice for the potentially innocent. Individuals emerging wide-eyed from cages within police vehicles, who clearly have complex and often un-diagnosed conditions that have led them finally to this ‘Death-Staresque’ place.

What I wasn’t prepared for, was a young man from overseas, who for many hours lay on his back in his cell, rhythmically kicking at the cell door, hoping that someone would take time to listen to him. He hadn’t been accused of any crime. He’d been ‘picked-up’ by police ‘because of irregularities’ and locked-up, pending the arrival of Immigration Service operatives. As the day wore on, custody staff grew tired of his perfectly reasonable questions: “Can I have a drink?” “Can I shower?” “When are they coming for me?” “Can I make a phone call?” By mid-evening, expletive-loaded refusals from staff reached a crescendo, as they shouted to a no-doubt scared and bewildered detainee, through an armoured cell door.

Finally, very late on that Saturday evening, an over-sized group of Immigration staff arrived. Dressed in para-military black uniforms, with a range of accoutrements dangling from their stab-vests. These individuals, operating in the shadows, handcuffed our young man and took him away in a minibus. No-one knew – or would disclose where he was headed. This was happening while drunken revellers a few miles away, were enjoying the time-of-their lives on a night-out in a UK that is lurching further and further towards a new nationalistic norm.

Not many of us are aware of the realities – and it’s happening right now, somewhere very close to you – for anyone ensnared in the immigration net. That’s why Refugee Tales III is so important.

Reaching ‘The Fisherman’s Tale’, approximately half-way into the book, it dawned on me why I was so utterly horrified. Each story is uniquely heart-rending, with often straight-forward, matter-of-fact descriptions of how the subjects – many of whom are children – escaped all manner of persecution in their parent countries. However, remove the names, remove the country of origin and ignore the fact we are talking about 2018/19 and this book could be recounting the horrors that were commonplace in 1930’s Nazi Germany. But we’re not talking about The 1933 Enabling Act, we’re talking about the Tories ‘Hostile Environment’ in our own land.

With nationalism again on the rise across Europe, holding a mirror up to what is happening to vulnerable people seeking sanctuary in this green-and-pleasant-land, isn’t something for which there seems to be a great appetite, but exposing blatant human rights abuses in our own country cannot be left to a few dedicated organisations. Each one of us should feel an obligation to read this book – and look closely at the realities of ‘Indefinite Detention’ in the UK.