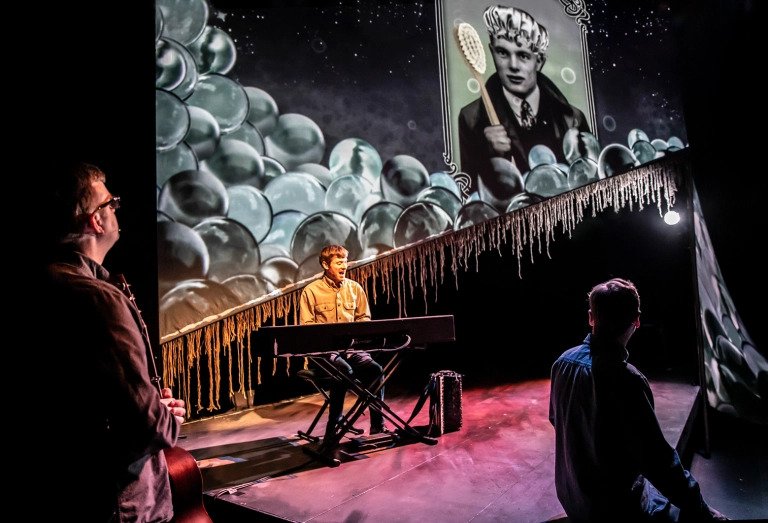 If you’re not already a big fan of ‘The Young’uns’ and their absolutely authentic, primarily acapella folk music, then I’d recommend you add them to your playlist without further delay. Last night in Newcastle – they were magnificent, moving, extremely funny, humble – and I think maybe a little-bit proud that the audience was captivated by their story.

A theatrical version of The Ballad of Johnny Longstaff, performed by the former BBC Radio 2 Folk Award Winners, has returned to Northern Stage until 18 September. Directed by Lorne Campbell, The Young’uns, Northern Stage and Harbourfront Centre Toronto, bring to life through music, an extra-ordinary tale of northern working-class activism, with music from their original album, alongside some stunning animation.

Before the performance kicked-off proper, the three lads sat themselves on the edge of the stage and explained what they do and why they do it. It’s the law that I champion Yorkshire in everything I write – so at this point, I’ll flag up the fact that Holme Valley’s very own Jack Rutter is currently one of the trio, while Michael Hughes is off becoming a teacher. Sean Cooney’s words and David Eagle’s claim that folk singers are less expensive than actors, set a perfect tone for the evening.

The Ballad of Johnny Longstaff is the true story of one man’s journey from poverty and unemployment in Stockton on Tees, through the Hunger Marches of the 1930s, the Mass Trespass movement and the Battle of Cable Street, to fighting fascism in the Spanish Civil War.  We follow in the footsteps of a working-class hero who chose not to look the other way when the world needed his help, and took part in some of the most momentous events of the 1930s.

Cooney has clearly been profoundly moved by the Johnny Longstaff story: “When Duncan Longstaff told us the incredible story of his Dad’s life, we knew we had been given something very special. This is our big chance to share Johnny with the world he fought so hard to raise at the time it needs him most.”

Longstaff himself is very present throughout the performance. In-fact quite rightly, he is at its centre. Before his death in 2000, his testimony was recorded and the audio is housed at the Imperial War Museum. It is an incredible listen. After studying hours of recordings, Cooney, Eagle, Hughes and Rutter have succeeded in making a man and his desire to right wrongs, as relevant today as he was in the 1930’s.

The Young’uns have created something both traditional and utterly contemporary with The Ballad of Johnny Longstaff. This story of a young man from the North-East, forced to leave his home town to find work – and undergoing a profound political awakening as he fights for social justice, opposes fascism, racism and the vested interests of a global capitalist system run amok, could as easily be set today as in the run up to the Second World War. Johnny’s story reminds us emphatically that change always rises up from ordinary people. This is the perfect show to encapsulate Northern Stage as one of the linchpin’s of the creative movement in the North: Local in its context, global in its ambition, accessible in its form and always innovative in its style.

Production animation is by Scott Turnbull (Where Do All the Dead Pigeons Go?/ Northern Stage at Summerhall) Aaron Brady and Emily Howells. The sound design is by composer, performer, DJ and improviser Mariam Rezaei.

After the run in Newcastle, there are additional chances for northern audiences to catch this important production, as the show moves to Hull Truck Theatre and York Theatre Royal this autumn.