"Some people soak in hot baths for self-care, I purchase plants." @allotment.27 reports from her plot as harvest is in full swing
@allotment.27
August 1, 2022 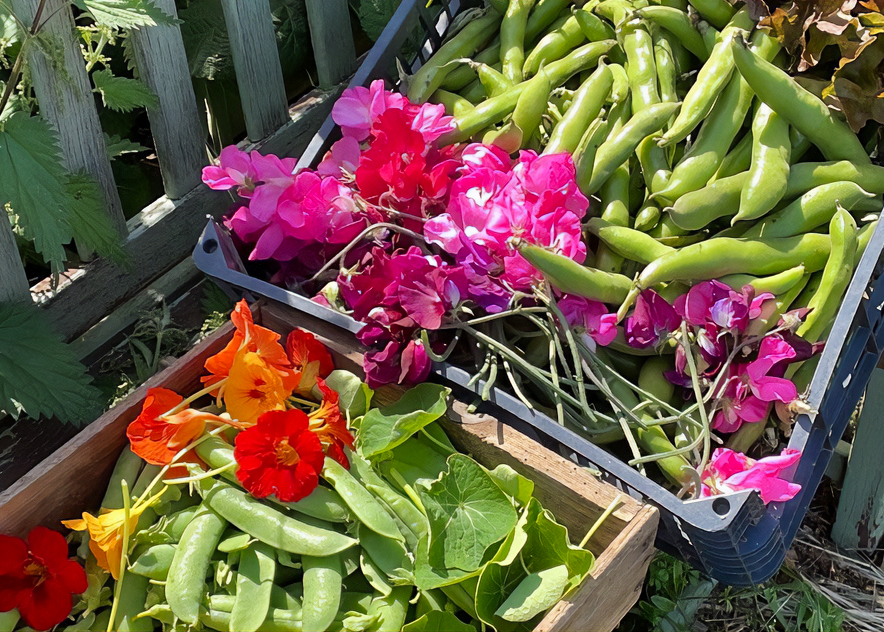 Anyone else having a tough time with anxiety recently? My brain whirring at 100mph with multiple contradicting thoughts, means lack of sleep and early allotment mornings. A few months ago I was exploring some gardens when I overheard someone say they were fed up of hearing about gardening and mental health. He felt it was inescapable. I was enraged, frustrated, upset and jealous. Mostly because I was still recovering from a bout of depression myself - and gardening absolutely got me through this. Getting the allotment shifted my whole life, and came at the most perfect time. It’s exhausting, makes my body ache, can be harsh and unkind - but gives the biggest boost to my health, confidence and mental strength. I’ve read that renting, childless millennials, increasingly rely on their spoilt pets (a cat in my case) and greenery (houseplants, gardening and allotmenting) to get through the weekly toil. Perhaps it’s the control, responsibility or the photosynthesis we memorised all those years ago.

Unable to escape a magic roundabout of thoughts at 4am - both rain and shine, I’ve managed to get to the allotment early. I can’t get over the weather extremes. During the hot days I’d be there early to water what I could before hibernating, and during the rainy weekends, I’ve managed to weed, harvest and return home with milk from the local supermarket by 9am. One rainy day I even managed to bring an allotment slug with me into the shop, only noticing at the checkout that it was sitting on the top of my bag like a pet. No-wonder people were looking at me strangely. I named him Bertie and released him outside. Unfortunately there are no more giant organic lettuces for Bertie to snack on now.

The last few weeks have been a succession of harvesting. I’ve tried to amend the supermarket shop to reflect what we have ready to eat. My fella noted the lack of frozen peas (a staple in our diet) but little did he know the large harvest I had coming our way. The broad beans have all been picked, shelled and then bundled into the freezer. I’ve heard broad bean hummus works. Similarly all the peas have succumbed to the same fete. I spent the early hours of a Sunday morning shelling peas, finding caterpillars and catching up on some trashy tv. I lost about 20% of my pea harvest to caterpillars but I surprisingly wasn’t too upset. Reminded of the classic story book, these hungry caterpillars were loving the peas. I guess that’s organic growing for you.

The recurring posies of sweet peas are gradually coming to an end. I’ve had regular bunches for the last few weeks, soon having to use anything I could find including coffee cups, energy drink bottles and old mayo jars, to display them in. One of the biggest challenges was how to get these delicate bundles home on the 10 minute walk. In my bag they get crushed, and I get stared at oddly when carrying them along the road, like I’m at a wedding.

The first courgette has been harvested and first sunflower head has appeared. Summer is moving super fast - there are loads of things I haven’t done that I wanted to. I’ve excited anticipation for the apple tree: slowly doing its thing, and holding such potential for crumbles and cakes. One thing I’m trying to achieve is a squash arch. I’d seen these done before but wasn’t sure I could achieve it. I currently have a range of squashes climbing but who knows if they’ll make it any further. I’m excited to see what happens, but also mentally preparing to one day finding a collapsed arch and smashed pumpkin Cinderella scene (Banksy’s controversial Cinderella crash at Dismaland comes to mind). Last year’s solo pumpkin I grew in the garden was such a prized possession, I could hardly bare to cut and eat it.

However THE proudest moment of the last allotment month for me was the harvest of five (yes only five) carrots. I’ve always struggled to grow them at home and never can seem to get the right soil - but this year it’s actually happened. Five wonky carrots that I’m incredibly proud of, and which tasted delicious.

Following some difficult days, I decided to reward myself with an early morning trip to the garden centre. I was there just after opening and find ‘that’ garden centre smell truly relaxing. I managed to get an artichoke plant which was eagerly planted the same day. I’ve only eaten artichoke a handful of times, but what an extraordinary plant. Some people soak in hot baths for self-care, I purchase plants.

In the weeks where we have had the hottest day on UK record, I’m already starting to think about Christmas veg. My aim is to have as much of my own produce on that festive dinner plate that I can. It feels strange to be thinking about winter already, but I’m quickly learning to be 6 months ahead when thinking about veg.

So, here’s to more summer evening harvests, potato salads, giant lettuces, finding the calm amongst caterpillars and slugs, laughing at the failures, releasing anxieties and celebrating those wonky carrots.