Stupid Cool Stuff: ‘Vibes and Vino - Paint and Drink Night’ at Chapters Of Us, Liverpool

We know there are all sorts of utterly brilliant things going on where you live: but this particular Liverpool Friday evening might take some bettering
Colin Petch.
July 17, 2022 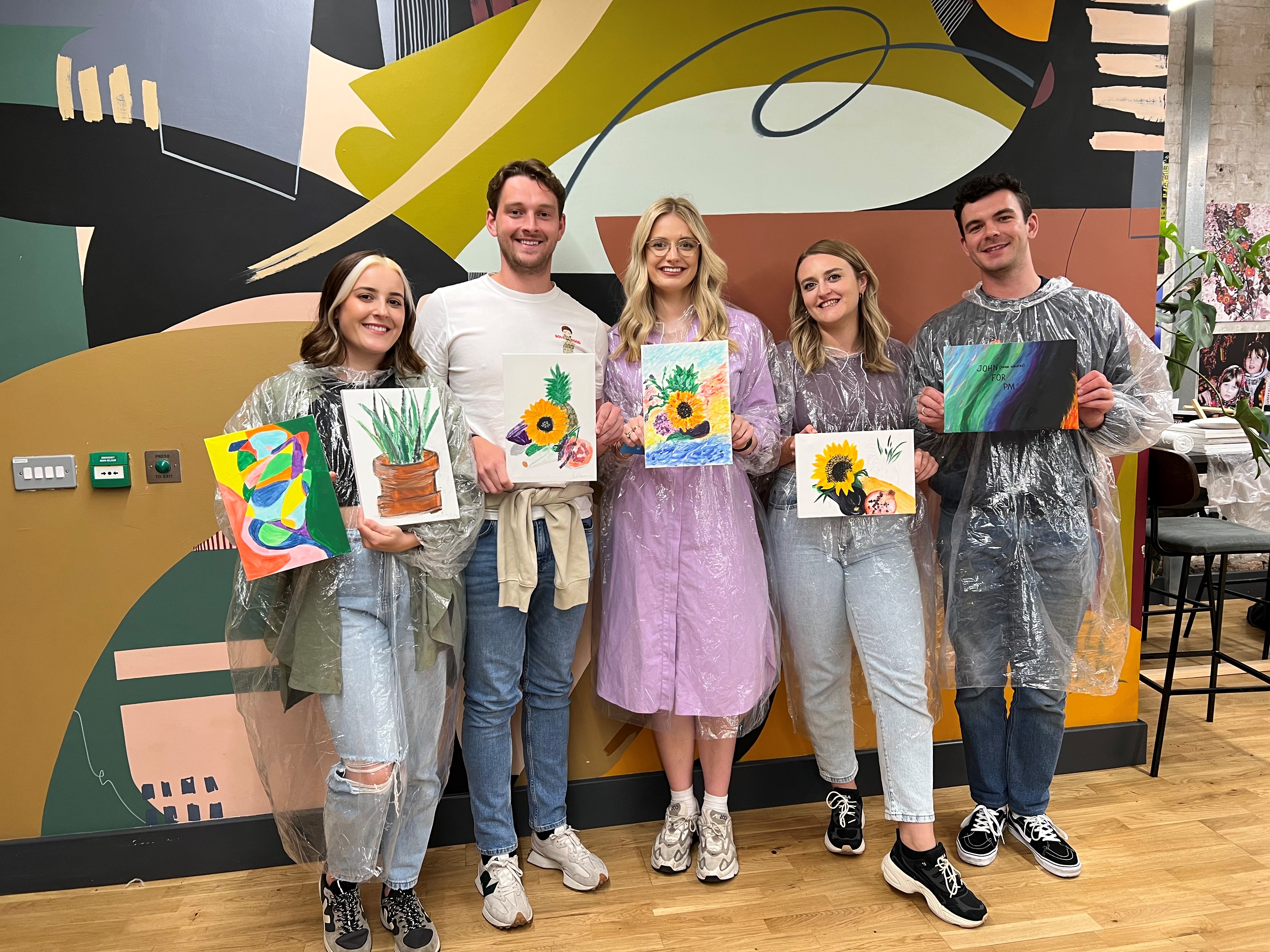 Liverpool is a creative hub – that’s clear. But what Mag North discovered this weekend, is within this hub – there is an extra-special enclave, known as The Baltic Triangle. A stone’s-throw from the Mersey, the origins of this community were founded either from the import of timber from the Baltic – or as a result of a whaling community being based there, that named the area after their northern fishing grounds. What we do know: we walked past the imposing Scandinavian Seaman’s Church on Friday…so the Baltic link, far away to the north-east, is a real one.

But in this incredibly special city, there are new movers-and-shakers creating an unparalleled creative energy within this triangle, that radiates out across the North and beyond.

Mag North are already big fans of the Sonic Yootha team, who – when they’re not whipping-up audiences in Leeds Millennium Square – are based in their Kitchen Street HQ. But we didn’t know these musical mixologists are only the tip of the Baltic Iceberg.

Wander down Kitchen Street and you’re on Simpson Street –and it’s here that we headed on Friday evening. Specifically to ‘Chapters of Us’: which is a special place created for people to meet, eat, drink, party – and much more. Chapters of Us has a dedicated event space off the main bar – and it’s fantastic. The people behind this venue have made an environment that is fizzing with creativity, positivity – and they need their own Mag North feature.

We were in town to catch-up with Joyce and Lin from ‘Stupid Cool Stuff’. They host unique monthly creative events in the Chapters space, that consistently sell out. Joyce is exactly the type of person that’s good for you – and Lin (currently studying Egyptology at Liverpool University – amongst many other things), is a bundle of energy and joy.

These two women are a phenomenal team. Lin is Joyce’s Mum-in-law – and they really are two peas-in-a-pod. The idea for their sought-after evenings was developed during that ubiquitous lockdown. Joyce was snatching time in Chapters Of Us and managing to hold on to her sanity, by painting and doing all sorts of creative stuff while absorbing the wrap-around happiness that you instinctively feel when you walk through the door.

Along with her husband, Joyce has a day job around the corner. The pair head-up ‘Late Night Agency’ – a digital content agency for the music industry, so they’re very much part of the Baltic ‘scene’. As things started returning to ‘normal’, Joyce was sure other people might enjoy spending a couple of hours in this lovely space – and losing themselves in something creative. With wine. And music. She was right. ‘Stupid Cool Stuff’ and ‘Vibes and Vino’ was born.

(It is true there are ‘radiators’ and ‘drains’ in life. Everyone in this part of town seems to be kicking out a heat that puts our current weather event in the shade.)

So, to the evening: With the coolest of tunes being supplied by DJ Andy, there was a collective appreciation in the room that the weekend was about to kick-off. Four large tables had each been set-out with a colourful flower, fruit and vegetable ‘still-life’ centrepiece (for inspiration). There was also a small easel and canvas for each of us, any number of acrylic paints, together with brushes and cleaning materials. Planning and preparation is obviously one of Joyce and Lin’s (many) strengths.

Ticket costs include a glass of wine from Chapters of Us. I initially declined, because there was a drive home, however after meeting my new table-mates, I reassessed and decided something other than GCE Art was going to be required to keep me from looking like a lemon. While painting a pineapple.

On our table were Beth and Dylan: a 27-year-old husband and wife team who sound like they have a fantastic social life – and in spite of renovating their new home – understand that ‘getting out in the world’ and having new experiences, is what makes a relationship work. Are you creative, I ask?

“We’re not – but these three are.” (Gesturing to their arriving friends.)

Not creative. That’s good news. I can just sip at the Rosé. Although both Project Managers in areas not linked to the arts: they lied about their artistic ability.

Next was Vicky: “I’m an actor and writer. Tomorrow I’m performing some Shakespeare at the new Shakespeare North Playhouse.”

She shared this while already intently focussed on sketching-out her canvas. (I took a significant mouthful of wine.)

With Vicky was Jack: “I’m an actor too. I’ve just finished in Hamilton in the West End – and done an Action Film at Pinewood – that I shouldn’t talk about yet.”

He casually throws in he hasn’t painted anything since school. Yeah – right.

On my left was Nicole. She’s been in Liverpool for 6 years, but is originally from New York. Her husband’s a scouser and she has a three-year-old little person called Olivia: “My grandfather was an artist in the Dominican Republic, so I feel that I’m carrying on his work.”

Nicole had shunned the centrepiece and instead was creating (with ease) an amazing abstract canvas. “My grandfather was an abstract painter.”

I had drunk my wine without registering the fact. The final member of our table was Katie. Another creative. Working as the 3rd Assistant Director on ‘Hollyoaks’, it was a given that whatever she produced over the next couple of hours – was going to be impressive. And it was.

You would expect anyone coming along to an event like this to be reasonably outgoing – and my new chums were great. But I ask what was it about the city that they felt made it so special?

Beth: “The people are friendly. We’ve always felt that Liverpool was ‘other’ [in relation to the rest of the country] so looking after each other – and being friendly – is important.”

And the culture? Is it accurate to say that Liverpool’s creative reinvention, is linked to the post-industrialisation shift – and also becoming ‘Capital of Culture’ in 2008?

Vicky: “Totally. We’re [Liverpool] a destination now because of all the art and culture we have. I have never felt I needed to leave to get-on.”

Katie references the move north of previously London-centred organisations, such as Channel Four and the BBC to the ‘M62 corridor’, bringing with them opportunities for young creatives. She adds: “We’ve a number of new production companies in Liverpool alone.”

It was an absolute joy to spend some time with this group of motivated, happy, intelligent, politically-engaged, and positive young people. When the 'old duffers' look around and worry about the future, it’s people like Dylan, Beth, Nicole, Katie, Jack and Vicky who are going to make it bright. They can all paint too.

The entire room was certainly filled with a special ‘vibe’ thanks to the ‘soft touch’ curation from Joyce and Lin. Both quietly moved among us, replenishing water and clearing up mess, while at the same time offering positive noises about our efforts.

It has to be said that I really ‘got into it’ – and enjoyed creating my work. And was surprised by the end result. However Lin did deliver some outstanding reverse-psychology, when casually stating: “Ooh that’s good…I was always taught to do a ‘wash’ first – but you’ve done it the other way around.”

Slightly crestfallen, I wandered amongst the other tables in a bid to feel better. It didn’t work. George had painted an iconic tree typically found on the African plains. The picture actually transported me immediately to the Maasai. I assumed because of the accuracy, that he’d used an image to copy? George: “No…just my imagination…I’m heading to Kenya in a few weeks – and am looking forward to seeing trees like this.”

Bev and her daughter on another table (who both work in DNA collection and management) were clearly also channelling David Hockney: “We’re from Warrington – and love getting out and doing new things like this.”

Bev had created a lovely summer meadow, alive with colour. In contrast, her daughter had produced a rather dark ‘alien’ figure, which I was assured, wasn’t a representation of a previous boyfriend.

Farrah, a Politics undergrad at Queen Mary’s is inspired by imagery from the 1950’s – and had crafted a striking ‘Marilyn Monroe-esque’ portrait, using only black paint, similar in many ways to the elaborate, more-permanent artwork proudly adorning her upper arms.

And so the evening was over too quickly – and it was time to say goodbye – for the moment. I hope Joyce and Lin fully understand the importance of what it is they’re doing with ‘Stupid Cool Stuff’? It does feel very ‘cool’, but ‘stupid’ is an adjective that should be replaced with ‘brilliant’.

For booking and for more info, you can access 'Stupid Cool Stuff' here

Chapters of Us can be contacted via their website