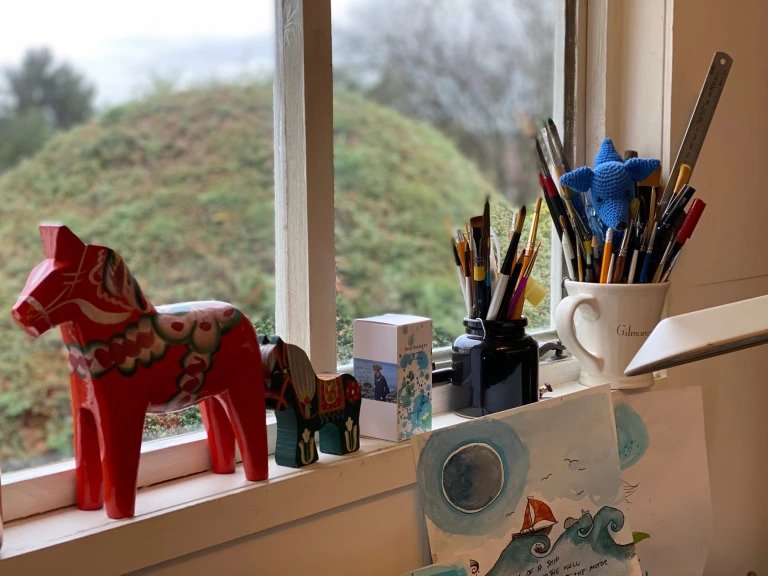 In addition to December 1st being the date that many of us will be opening the first door on our Advent Calendar, it’s also a key moment in the poetry world, as Ilkley-based poet, artist, writer, helper – and all-round special person, Sussi Louise Smith gifts ‘Seachanger – Wave Weaver’ to the world.

Seachanger is the second collection of poems from Smith – and also represents the second book of a planned trilogy of her work, that she launched with ‘Seashaken Light’, in November 2020.

Seashaken Light was lauded not only in the UK, but also in Smith’s native Denmark. (The beauty, majesty and warmth of Yorkshire and its people, brought the artist across the North Sea in 2015 and has anchored her at the very heart of Ilkley’s creative community.)

Like it’s predecessor, Seachanger is multi-layered and feels almost a living entity. With the enduring roll of the tide on the widest beach as it’s heartbeat, this collection of exquisitely woven words deconstructs emotions that we might not have previously acknowledged are trapped within that ache in our chests. Or cerebrum. Or within the dreams of longing and loss, that will not leave us in the darkest part of the night.

Smith describes Seachanger as: “a collection of love, fun, despair and waves” and a “super salty book of blue poetry and flash fiction”. While it is all of these things, the book is much, much more. The poems, written with a global pandemic (and the extraordinary challenges that is presenting for us all) as a backdrop, the works are none-the-less, utterly honest and faithful to those things that are of paramount importance to the poet.

The hope and expectation conveyed by the opening poem is total: “This is how it always begins with a moonrise, by a sea and my open heart”. The reader is carried to a North Sea beach, to stand alongside Smith – before the incredibly sea-worthy vessel of the following sixty-odd pieces, sets out towards the horizon.

The poetry is accompanied by Smith’s own paintings and photography – together with selected works from Tjasa Owen, the U.S. based artist whose foreword to the collection, confirms that the pair share much more than a love of the sea. The beautiful colours employed by both artists further add to a sense of healing and understanding, that emanates from the pages of Seachanger.

Smith has previously stated that she believes ‘creativity in thinking and doing can heal people and communities almost as much as the sea’. I think most of us will echo and applaud that view – along with everything else this multi-talented, adoptive Yorkshire-woman communicates through her different mediums. It’s not at all surprising to learn that Ms Smith’s relationship with the sea stretches far beyond her incredibly moving writing and beautiful painting. She is committed to the welfare of our seas in addition to people and the Poet is also an extremely proud ambassador and patron of The Live Blue Foundation. This organisation is doing some of the most important work – on a global scale. Their vision is a world where everyone understands and has access to the cognitive, emotional, psychological, social, physical and spiritual health benefits of waters and oceans–their #bluemind – and their projects are inspirational.

As with all art, what the viewer, reader or consumer takes from the interaction, is entirely personal and unique – so highlighting pieces from Seachanger that particularly ring out for me – would be quite wrong, but I don’t care. The title poem: Seachanger – Wave Weaver, explains something of the history to a love story between people, places, opposites and counterparts.

Things That I Love About You is a precious list. To use this poem as a template to create your own precious list about that in your life that’s most important, is to record and hold on to every moment while it’s still possible. Before it has to be a list compiled from memory.

Cancer: These are the best things to say – is a toolkit for ‘not saying the wrong thing’. This piece should be prominent in every Oncology unit in the country, although the advice has an almost universal relevance.

Seachanger – Wave Weaver is published by Cathy Harper Publishing on 1 December and the launch is accompanied with two very special events at independent bookshops: On 2 December at 7pm, Sussi Louise will read from her collection and talk about the book’s journey, at the Grove Bookshop in Ilkley. On 9 December at 6pm, a similar event will take place via Zoom, from The Book Corner Bookshop in Saltburn.

To end, it’s important to plant a flag (in her own words), for a cause that seems to drive everything Sussi Louise Smith does – and the reason for her utterly inspirational approach to life:

“Something very important about me is that about seven years ago I made a pledge to the Action for Happiness Organisation: to paint for smiles and not because I want to get rich (not that I wouldn’t like to have some more money). Just to let things flow out of my hands and hear what the heart has to say.

In this way my hashtag #sussishappyartproject has reached from Hawaii to Australia, from Iceland to South Africa and from young children to 97-year-olds.”