The Elterwater Merz Barn at 75

Chris Routledge discovers an unlikely Cumbrian building which sits at the heart of an active art community making work in the face of a still violent world
Chris Routledge.
August 10, 2022 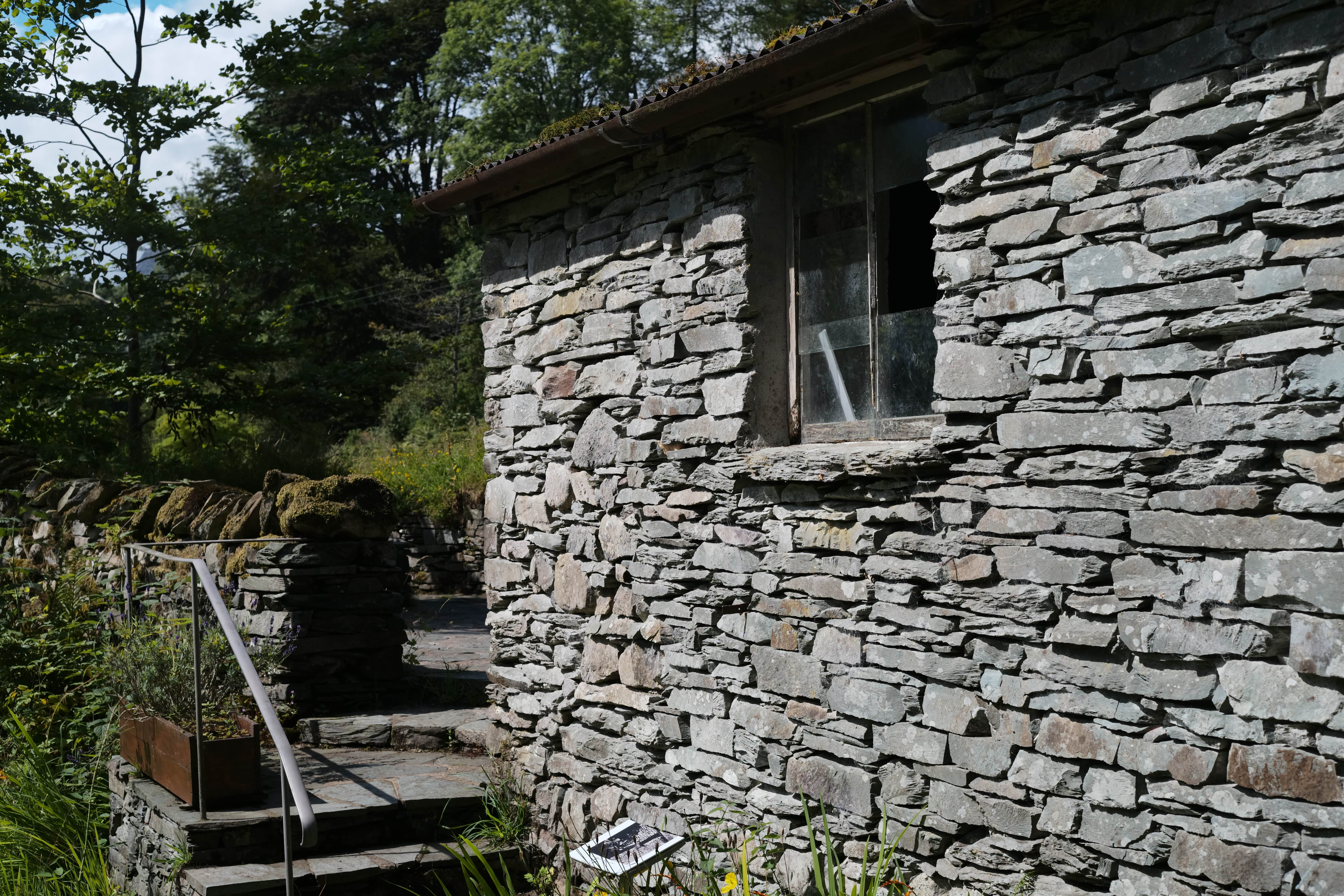 On an unexpectedly warm and humid day in the Lake District I took a walk over Loughrigg Fell and the hills beyond to the Langdale valley, in search of the Elterwater Merz Barn. I'd heard of the Merz Barn years before, seen paintings by its creator Kurt Schwitters, and over the years I have consumed many pints of beer in the nearby Britannia Inn in Elterwater village, but I had never visited it before. That was a mistake. The Elterwater Merz Barn, tucked away close by in a piece of woodland known as Cylinders, is well worth visiting. 2022 marks the 75th anniversary of its inception, and this is being celebrated with an exhibition called KS75, curated by Millie Laing-Tate, and featuring the work of nine artists and collectives.

Schwitters is an important figure in early Twentieth Century art, and hugely influential, both in his own lifetime, and on the abstract and Pop Art movements of the 1960s and later. Born in Hanover in 1887, and trained at the Dresden Academy of Art, he worked as a designer and typographer. But he also began to think about the purpose of art, and how it might work, especially in the aftermath of WWI, when Europe was in ruins, and the old, broken ways of doing things seemed thoroughly corrupt and played out.

Schwitters' fragmented approach was at one with his times. T.S. Eliot's 1922 poem The Waste Land is a paella of literary and cultural fragments, and in the final section Eliot has the Fisher King declare "These fragments I have shored against my ruins". This sums up Schwitters' approach too. "Merz" was the word he used to describe his artistic work, which ranged from poetry to sculpture, from drawing to performance, painting and collage. Schwitters saw these fragments as part of a whole, which included himself and the place where he worked. This place he called "Merzbau" which roughly translates as "art space".  He made his first Merzbau inside his parents' house in Hanover, but it was destroyed by bombing and no longer exists. "Merz Barn" is a deliciously Cumbrian pun.

Facing arrest by the Nazis in 1936, Schwitters left Germany, travelling first to Norway, and then to England, where he arrived in 1940. After release from an internment camp on the Isle of Man, he lived first in London, and then, from 1944, in Ambleside, where he made a small living painting portraits and landscapes, some of which are exhibited at the Armitt Museum there.

You enter the woodland that surrounds the Merz Barn from the road through a makeshift gate and find yourself in a space that feels a little like a secret garden, where things are mysteriously offset from the world outside. It has an unkemptness that is entirely in keeping with the way nature has reclaimed the land from its industrial past. The site of former gunpowder works for the nearby quarries, this place feels like a work in progress, a space where work is going on, things are being made, and ideas are fizzing. It's an exciting feeling, more like stepping into an active studio than a manicured gallery.

There are several buildings on the site, and temporary marquees used for workshops and exhibitions. The Merz Barn itself is surrounded by activity and exciting work. In 2022 much of this is encompassed by дітей, the Russian word for children. An exhibition of photographs made around the Russian bombing of the Donetsk Regional Academic Drama Theatre during the siege of Mariupol, where children were sheltering, and where дітей had been written in large letters outside, looked like historical work from a war long ago, but of course the atrocity was committed in March 2022.

Still more powerful is the Ukraine Pavilion, a large, low-ceilinged and windowless building made from the trunks of trees brought down by 2021's Storm Arwen, and larches felled because of Ramorum disease. Pushing your way past a door made from a sheet of black plastic, you find yourself in a space that is almost entirely dark, apart from a handful of candles. When you finally find somewhere to sit, and and your eyes begin to adjust, a large mural emerges on the opposite wall: a photograph of children huddling in the basement of the Mariupol theatre. It is one of the most moving pieces of visual art I've experienced in quite a long time.

The major work Schwitters produced there between 1947 and his death in 1948 was an unfinished three-dimensional wall sculpture made with plaster and found objects, constructed to take advantage of light filtering in through the rooflight of the Merz Barn: Schwitters, the work, the building, and the woods, were one. By the 1950s the Merz Barn had fallen into disrepair, and the work was removed in 1962 for its own safety to the Hatton Gallery in Newcastle upon Tyne, where it is still on display.

Neither the location of the Elterwater Merz  Barn, nor its appearance, suggest anything about its importance in the history of art, or its role as an artist's refuge from the industrial-scale violence that engulfed Europe in the 1930s and1940s. The Merz Barn today is a small, slightly ramshackle building, rather like a garden tool shed, but it sits in the middle of a vibrant and active art community making work in the face of a still violent world. It is a small, quiet remnant of mid-Twentieth Century European abstract art, left behind like a glacial erratic on the valley floor. Schwitters' own words are carved on an actual erratic boulder at the entrance to the wood: "My spirit must not stop".

The Merz Barn can be found in the woodland opposite the Langdale Hotel, Elterwater, Cumbria.