Mag North calls in at a new exhibition at one of our favourite Lake District galleries
Eileen Jones.
October 7, 2022 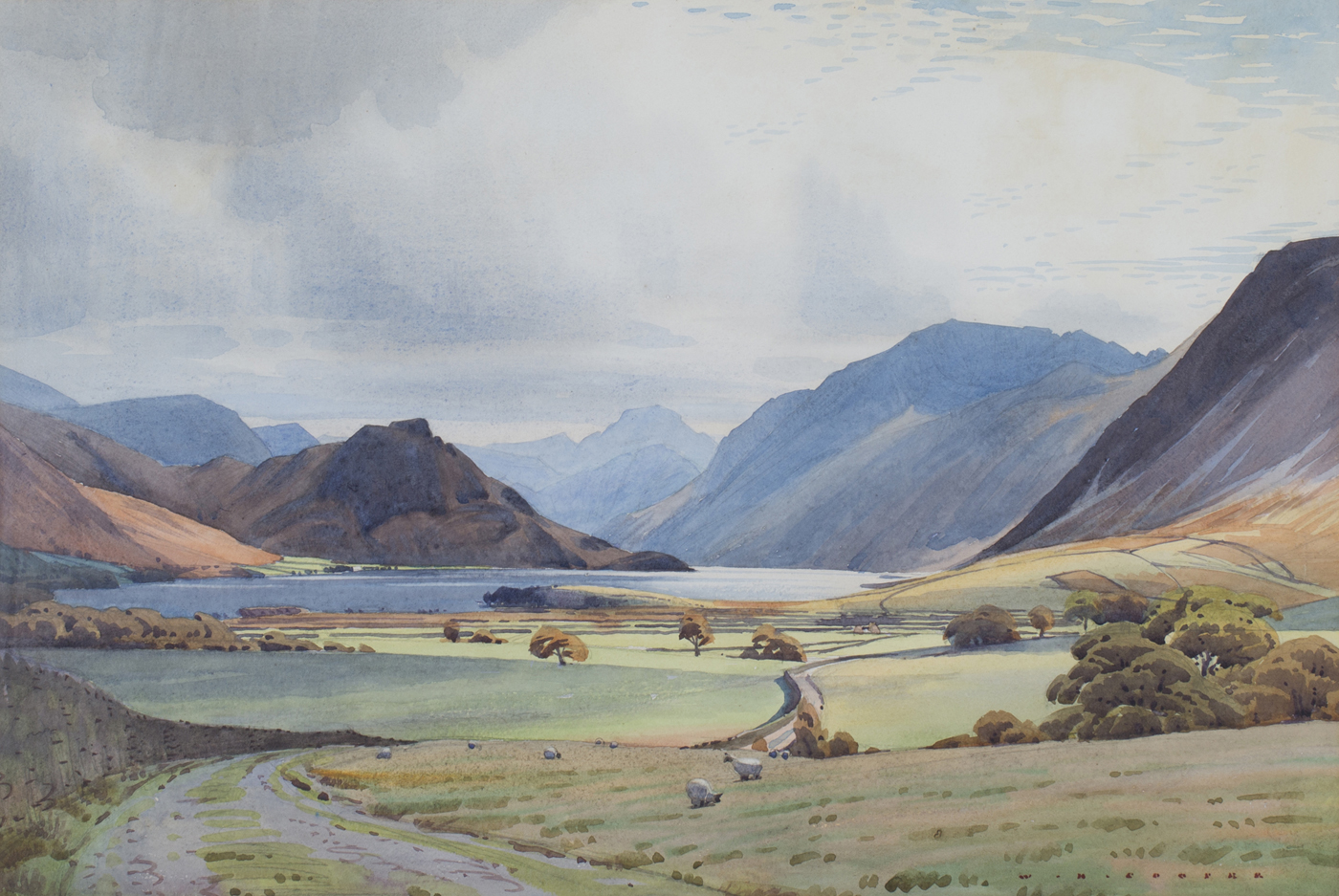 It’s a touching tribute from a son to his father, from one great artist to another. A new show now open in Grasmere focuses on the early life and work of William Heaton Cooper, and its curator is his son, Julian Cooper, Britain’s foremost living mountain painter.

Generations of art lovers, hill wanderers and Lake District visitors are familiar with the work of WHC, dominated by towering peaks, exquisite light and shade, and astonishing rock textures. This, though, is WHC as not seen before, many paintings not shown previously, indicating his development as an artist and including works that are very different from the rock and fell landscapes for which he became famous.

The pictures tell the story of a truly great – and fascinating - life.  “We know that William’s work is loved and appreciated by people who love the Lake District, and especially the mountains of the Lakes,” says Julian Cooper. “But we think they will be surprised and intrigued by these earlier works.” The Heaton Cooper Studio and archive gallery, where this exhibition is being staged, was built on this site by WHC and opened in 1938.

He was himself the son of a great landscape artist, Alfred Heaton Cooper, the founding father of this remarkable family dynasty of painters. William was born in Coniston on October 6, 1903, the third child to a Norwegian mother, Mathilde, and AHC. His early memories included playing by Mines Beck behind the house, and up on the fells above, as well as an idyllic 15 months living in Mathilde’s home village of Balestrand in Norway.

The family moved to Ambleside in 1911 and the boy spent his time walking and scrambling on the fells and in the ghylls and becks. After leaving school at 14, William helped his father in his studio and accompanied him on painting expeditions throughout the Lake District, and sometimes by himself for a few days, ranging the fells, drawing and painting all the way, staying in farms in Wasdale, Eskdale, Dunnerdale or Buttermere.

At 19 he gained a five year scholarship to the Royal Academy Schools in London, but after winning the Creswick Prize for Landscape, which brought him £30, he left  early, deciding to survive on that and on the occasional sale of paintings at the Goupil Gallery and the Royal Academy Summer Exhibition.

He travelled to France and explored the landscape of Provence, with its brilliant light, living for a while in the caves of the Calanques. He returned to live and paint in Sussex before moving back to London. In the winter of 1929 he became seriously ill with double pneumonia and pleurisy and was taken to hospital. When still in hospital he heard that his father was dying of cancer, and he arrived in Ambleside a few hours after he had died at the age of 66. William was too ill to attend the funeral.

William’s doctor told him he wouldn’t survive another winter unless he spent time in a sunny climate, so Mrs Edith MacIver, a friend of the family, provided a solution. Her husband owned a small shipping line running cargo between Liverpool and Buenos Aires. She asked him if he would care to travel to South America as supercargo on the SS Burgundy from Liverpool. It was the final voyage of this 30 year old boat, which weighed in at 2500 tons. But William used the journey well.

During the voyage he made sketches and several paintings, and then stayed with a British family in Buenos Aires, where he painted mostly around the dockland area of the city, especially round the old port that was jammed tight with small boats. He also travelled across Argentina to Puente del Inca, 10,000 feet up in the Andes, and within reach of Aconcagua, the highest mountain in the Americas. There he roamed around and made several paintings, reaching a height of 14,000 feet. His health restored, he sailed back to England.

Back in Ambleside William began serious rock climbing, initially borrowing a friend’s rope. After joining the Fell & Rock Climbing Club, he climbed on all the crags with some of the leading climbers of the day, and in 1934 began to make the illustrations for the new climbing guidebooks that were being published every few years, keeping up with the new routes being done every year.”

In 1937 William had the idea of building a house and studio with a gallery in Grasmere, and wrote a book to pay for it, ’The Hills of Lakeland’, illustrated with 52 paintings. Published by Frederick Warne, it sold well, and after buying a small plot of land adjoining the village green, the gallery was built. As soon as it was finished he hung it with paintings and sold them in order to finish the whole building. It was completed in 1938.

It was here that he met the sculptor Ophelia Gordon Bell, whom he married in 1940. During the Second World War, Ophelia drove ambulances with the First Aid Nursing Yeomanry in Manchester, and William joined the Air Ministry as a camouflage officer, specialising in disguising airfields, having previously served for a short while in the local Home Guard.

The Studio at Grasmere became their home, with William’s mother Mathilde, and where their daughter Otalia was born in 1943, the first of their four children, before they moved higher up the valley to Winterseeds.

William, who died in 1995, came to be known as one of the most celebrated British landscape artists of the 20th century. The studio was subsequently run by his son John, and now his grand-daughter, Rebecca. And his Norwegian mother is remembered in the more recent extension to the gallery, Mathilde’s cafe.

The exhibition is open now, till November 28.