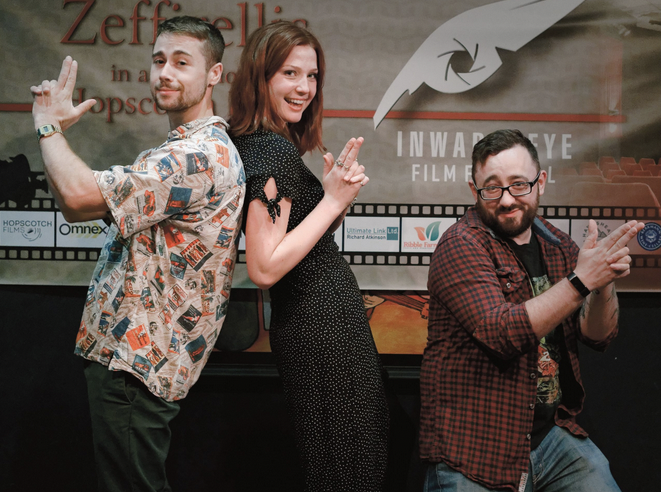 Top screenwriters will gather for a long weekend in the Lake District to share the secrets of their success with a group of new writers from across the UK.

The Writers’ Workshop will be held at Rydal Mount, the former home of the poet William Wordsworth, and is part of a festival being staged by the extraordinary independent cinema in Ambleside, Zeffirellis.

The Inward Eye Film Festival is organised by Zeffirellis’ managing director Dorothy Smith, with Charlotte Wontner of Hopscotch Films, who is a descendent of Wordsworth. The name comes from a line in Wordsworth’s most famous poem, “I wandered lonely as a cloud” * where the poet alludes to individual imagination and artistic spirit. It was first held in 2019, following a discussion with the actor Brian Cox when he visited Rydal Mount. He is now patron of the Inward Eye Film Festival.

The workshop will be attended by seven screenwriters who have been invited to hone their skills alongside industry mentors and writers. They will be given constructive feedback on their scripts, and pitching advice, and be invited to networking events and talks at the film festival as well as all the evening screenings.

A headline talk at the festival will be after the Mrs Harris Goes to Paris screening with director Tony Fabian and multi-award-winning writer Olivia Hetreed. Olivia was a mentor in 2019 when the festival screened Girl with a Pearl Earring as an anniversary film.

Also at the workshop as a mentor is John Irvin, the British film director and producer with more than 30 motion pictures to his name and extensive experience working with most major film studios, both in the UK and America. He is co-founder of Dear Heart Productions where he co-produced and directed Mandela’s Gun, which screened at the Inward Eye Film Festival in 2019. Also mentoring is Steve Bowden, a producer with over 25 years experience in the industry. His film work has been licensed by major international film  distributors; broadcast on the BBC, ITV, Channel Four and SKY; streamed on Netflix and Amazon and at international film festivals.

The team is completed by Jonathan Hourigan, a graduate of the National Film and Television School and a former assistant to Robert Bresson, who is now programme director for the MA in Screenwriting at the University of Manchester. He is currently co-writing the first feature film of the Serbian documentary filmmaker Maja Novakovic.

Charlotte Wontner said: “This is a wonderful opportunity for the budding screenwriters, to have individual attention from these big names in the industry who will help them focus on the most important areas of their projects and give them the tools they need to reach the next stage with their scripts”.

One of the previous attendees, Annabel Bates, said: “The workshop was a unique, fruitful, and enabling experience in a venue to die for.” And Keir Alexander said: “Our task was to work intensely through each other’s scripts, reading ,analysing, feeding back and offering ideas, all of which was achieved with the minimum of rancour and the maximum of warmth. Much of this was down to Vicki Jung, the presiding script consultant, who was more than impressive with her insights and her ability to frame her ideas swiftly, fully and effectively, for the benefit of each writer.”

The Inward Eye Film Festival  was founded in the hope of sustaining arts in the North West and promoting independent film-making. This year each of the three days is themed on aspects of what Wordsworth celebrated in the human spirit.

Day One’s theme is entitled Origins and Dreams, and includes The Gravedigger’s Wife, Somalia’s first ever Oscar submission this year, Full Time (A Plein Temps) winner of best director and best actress awards in the Venice Horizons Section, and the recently released Mrs Harris Goes to Paris starring Lesley Manville. A screening of  Mark Cousins’ The Story of Film: A New Generation, continues his examination of the power of film into 2021, and Mark will be virtually present for a Q&A afterwards.

Day Two, Secrets and Escapes, centres on the presentation of reality and deception in film, including the harrowing documentary looking at the failure to prosecute those guilty of Holocaust crimes, Getting Away with Murders, with writer, director, producer David Wilkinson in attendance to speak about this incredible documentary. And My Old School is a striking documentary using animation, interviews and dramatisation of the true, strange story of a 30-something man who attended school pretending to be a teenager. Then there’s a screening of Women Make Film, a revisionist history focusing on women’s integral role as a creative force in film.

The final day, Risk and Reflection, brings the highly acclaimed animation Where is Anne Frank , along with, among others, Joyland, winner of Un Certain Regard Jury prize at Cannes (Pakistan’s first ever), and Fire of Love (according to Rolling Stone, the greatest Lava-fuelled love story ever told!). The festival day three headline film is Explorer, the epic documentary about the life and adventures of Sir Ranulph Fiennes. The filmmakers will all be there, too, for a Q&A after the screening.

The concluding film of the Festival is David Cronenberg’s controversial 2022 Palme D’Or nominee Crimes of the Future. There are 29 films in all, many with filmmakers’ Q&As, a wonderful choice of anniversary films with some BFI 4K remastered films, plus an Inward Eye Short Film selection, and music each evening.

It’s a hugely ambitious project for the team at Zeffirellis (with Fellinis) which has been screening films in Ambleside for more than 40 years. There are five cinema screens across three sites, along with two restaurants, a daytime cafe, and a jazz bar which features free concerts every weekend.

Full details of the screenwriting mentors, and details of how to apply for next year, can be found at https://ieww.co.uk/mentors/

*“They flash upon that inward eye which is the bliss of solitude; and then my heart with pleasure fills and dances with daffodils.”