The Lark ascending from Grasmere and Rydal

In true wandering minstrel spirit, a group of musicians took Vaughan Williams around the Lake District for a day.
Mag North.
August 4, 2022 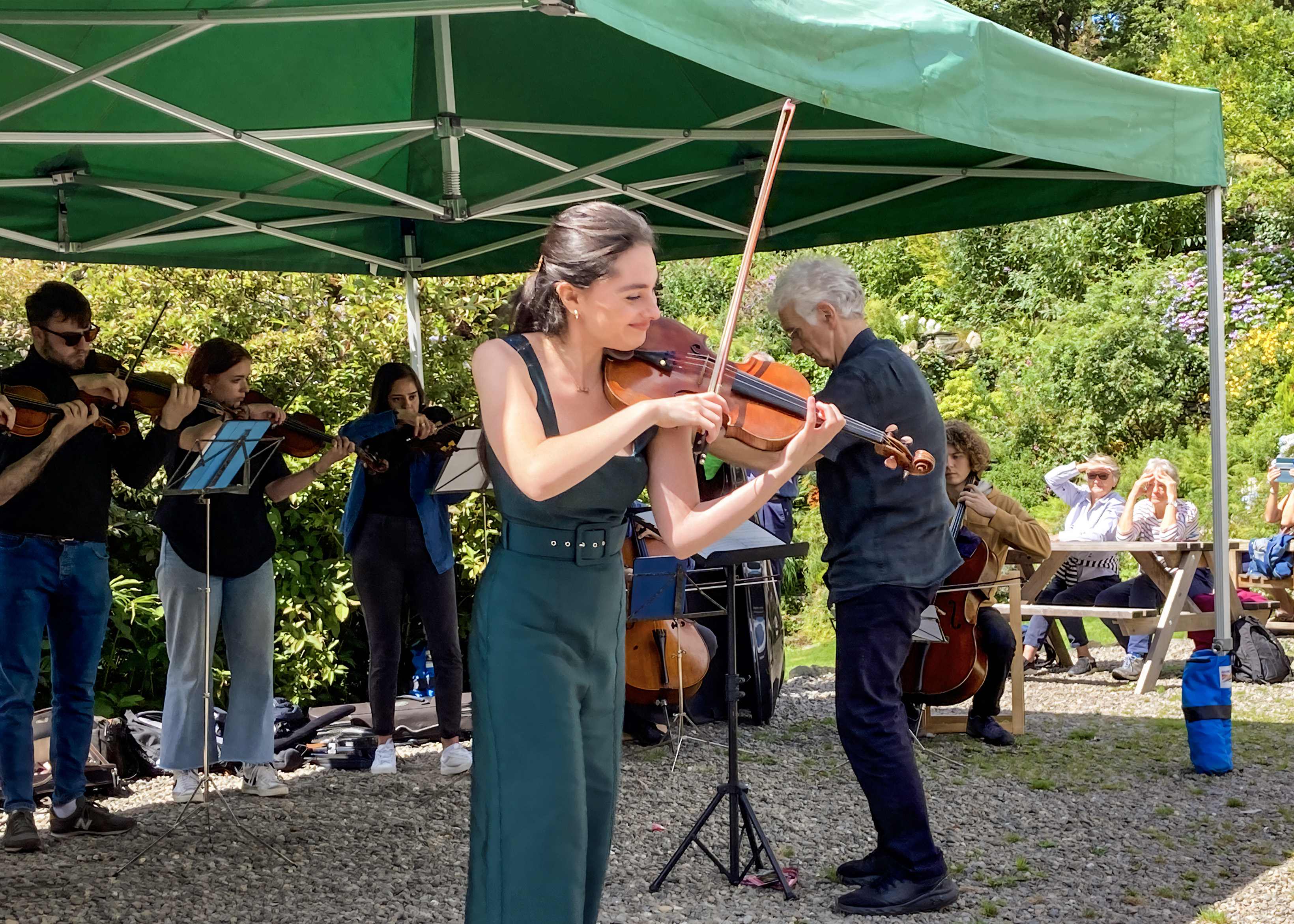 The Lark Ascending trail was one of the highlights of the Lake District Summer Music Festival, a series of four free recitals in various locations, and Mag North was privileged to be there for the first two, at the Heaton Cooper Studio in Grasmere, and in the garden of William Wordsworth’s home at Rydal Mount. It was part part of the festival’s celebrations to mark 150 years since the birth of Ralph Vaughan Williams. And it’s one of our favourite pieces of music of all time.

We wrote about the plans for this when we first learned of the festival’s programme https://www.mag-north.com/posts/larks-ascending-in-the-lakes, and on the day the sun shone throughout, remarkably, in what’s been a disappointing summer in the Lakes.

The musicians began their tour in front of the art gallery and studio established by the Heaton Cooper dynasty of artists. The director of the festival, Stephen Threlfall, had been invited by the studio’s director, Rebecca Heaton Cooper, and here he was the conductor. The star of the Lark Ascending trail was the remarkable young violinist, Esther Abrami, backed by the musicians of the London-based Waldstein Quartet and, from Manchester, the Heartwood Quartet

Esther is a social media star as well as a wonderful musician, one who has succeeded on international stages and  secured a coveted recording contract with a major label due to her courage, determination and willingness to share the ups and downs of her own remarkable life as a musician with a wide online audience. When introducing her to the Lakes’ audiences, Stephen Threlfall pointed out that the last time she had played this piece was at the Royal Albert Hall in London.

Born in the south of France in 1996 and raised in Aix-en-Provence, Esther grew up in a culture far from towering classical institutions. “I went to a small, country school and I was always outside as I loved nature. We had a wild garden at home; my dad built me a little bench up on the hill where I could go to read and play my violin."

Aged just three, Esther was given her first tiny violin by her grandmother. “I loved the feeling of the violin tucked in so close to me, like a living creature. I loved the sensation of the warm sound traveling through my body. After just half an hour with the bow in my hand, I knew that this was what I wanted to do for the rest of my life.”

She eventually became a boarding student at Chetham’s School of Music in Manchester, and in 2017 she was accepted as a student at the world-leading Royal College of Music in London. Alongside her lessons, Esther - who now lives in Manchester - also began to build her online career, playing popular classical music on her social media channels.

In Grasmere the audience included visitors to Mathildes cafe next to the studio, and passengers waiting for the number 505 at the bus stop opposite. The musicians then headed to Rydal Mount where the curator, Leo Fineghan, introduced the performance with a reading from George Meredith’s poem, The Lark Ascending, which inspired the musical composition.

(Leo was also given a rousing impromptu playing of Happy Birthday by the string octet!)

For Stephen Threlfall, in his first full year as artistic director of the festival, the Trail symbolised the spirit of Lake District Summer Music. For many years Director of Music at Chetham’s School in Manchester, Stephen is himself an accomplished cellist who has played with the BBC Philharmonic Orchestra, the London Symphony Orchestra, the BBC Concert Orchestra, and  the Royal Scottish National Orchestra (of which the latter two as assistant principal.)

He wants to broaden the appeal of the festival which began back in 1985, while maintaining the enthusiasm and support of the core audience. “At the festival’s heart is a formula to unite an international music festival, along with truly world-class training, with the inspiring backdrop of the Lake District. It’s very important, however, to open the doors, to be more accessible and provide events that people feel excited about, or curious about attending.”