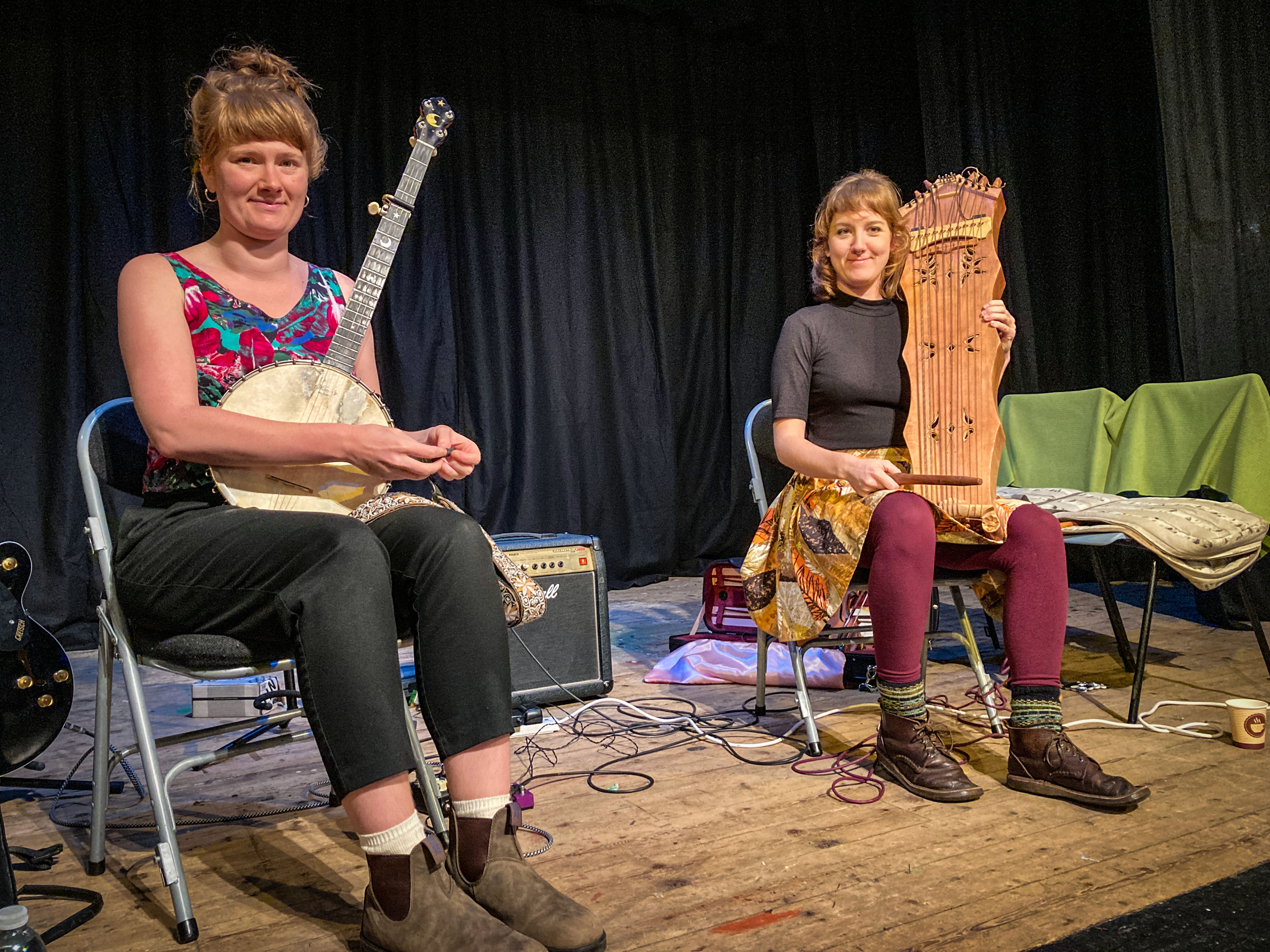 They may be folk music royalty but the Rheingans Sisters love a village hall. “We’ve been on tour for several weeks and this is the first time we’ve had curtains,” said Anna, the elfin half of the duo, as the red drapes opened. They’ll be used next time for the panto.

This village hall – Grasmere, the next night, Shap  – is where the WI meet. Indeed, it turns out that many of their number were here and along with many in the audience they’d never heard of the Rheingans Sisters before. That’s the wonderful thing about cultural life in a village; you go to something because it’s on, and the result is an unexpected broadening of experience.

And a total revelation, in this case. The sisters, originally from Sheffield, have won BBC radio awards for their music and are hailed across the world as visionaries, creating rich and dynamic sounds which are contemporary while being anchored in folk traditions. Their music, they told us, is “hung on the bones” of older tunes.

They sing, with sweet, folksy voices, while simultaneously playing (in different keys, different rhythms) the fiddle, or banjo, or guitar, or bansitar, and most hauntingly the tun tun, or tambourin a cordes, a long and narrow stringed percussion instrument. They talk to one another and to the audience, in their songs and in between their songs, explaining the heritage of their music with its influences from France and Spain, from Scandinavia. One number, where they just plucked their violins, no bows, Salt of the Earth, was based on stories of life, death and birth from Algeria. Their music itself is a conversation in harmony and disharmony.

Rowan – rooted, like her name, a matriarch of the forest – is now based in the Peak District. She’s well known on the English folk scene as part of a hugely popular trio Lady Maisery as well as for her work with Nancy Kerr & The Sweet Visitor Band and the Songs of Separation super-group alongside Eliza Carthy and Karine Polwart. One of her numbers, The Forest, was written, she said, “when the news got too much, and I took a walk in the woods”. It seemed appropriate to be played this night.

Anna, the sprite, lives and works as a fiddle player in Toulouse where she gained a first class diploma from the Conservatoire. Both sisters also spent a lot of time studying ﬁddle music in Sweden and Norway, so they pull a range of inﬂuences from both northern and southern European ﬁddle traditions into their own interpretations, compositions and arrangements. One fascinating number, demanding dextrously intricate fiddling, needed a long introduction. It was Anna’s version of a very early recorded piece that she discovered in a folk music archive in Trondheim in Norway, and spent three years developing. “I wanted to decode what was happening.”

Their music is full of both humour - Dancing in the Cowshed, for example, because, Rowan explained, she used to live in a cowshed - and poignancy. Like the haunting Photograph, composed after the sisters had stayed in Derry. They write songs that no one else writes. “I like to write about the little animals that don’t often get written about,” says Anna. Such as rats. And goldfish. Mosquitoes in the Blackberries, she said, was written “in the hope that it would be a peace offering. It hasn’t worked.” Sighs.

There was a mesmerising number called Insomnia, with fiddles and drumming feet – close your eyes and this could be a six piece band playing – which was written about the noises, from bathrooms, that keep you awake while you’re on tour. “But at least in Premier Inn, unlike Travelodge, the noises are in D so we can sing along.”

The finale was a pair of dance tunes, and was introduced with just a tinge of regret that in THIS village hall, with its excellent flooring, no one was getting up to dance. This would not be the case in France, the sisters explained. It’s not a lack of appreciation, really; we’re just very English here.

After Shap, and Berwick upon Tweed, this weekend, the Sisters return to the north to Southport on February 15. Details: https://www.rheinganssisters.co.uk/shows

Grasmere Players will present their pantomime, Robin Hood, at the end of January.