'The rise and fall of Little Voice' - Christina Bianco Interview

As ‘The Rise and Fall of Little Voice’ opens at Liverpool Playhouse, Mag North hear from the talented lead about her role, her love of the UK and how cool it is to be in the North.
Colin Petch. 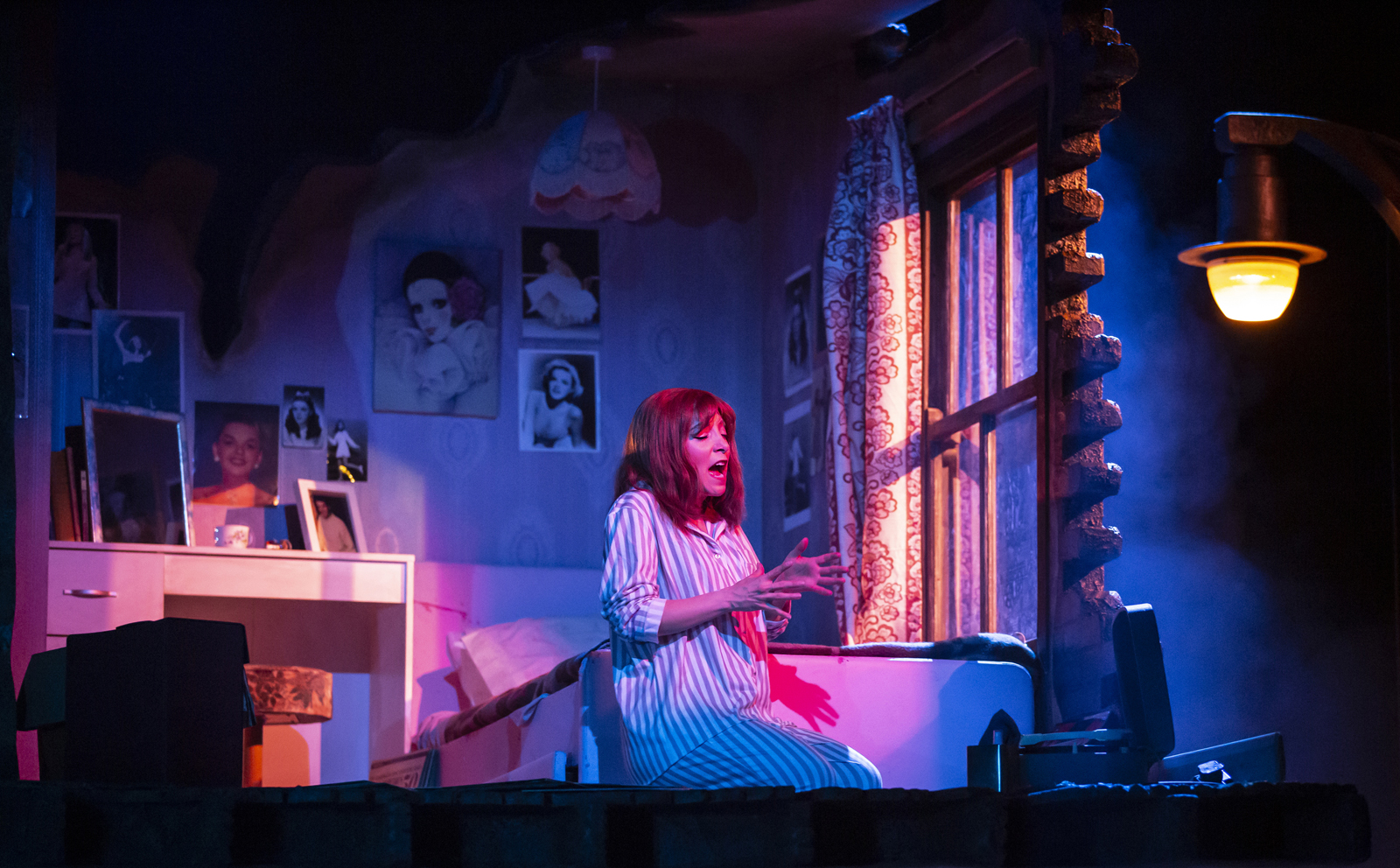 From stage to screen, Christina Bianco’s singular voice and comedic charm have brought audiences around the world to their feet. Born and raised in New York, Bianco captured international acclaim as a YouTube sensation with her impression videos, gaining over 25 million views. Dubbed ’The Girl of a Thousand Voices,’ she’s since performed on major television programs including, The Ellen DeGeneres Show in the US, and The Paul O’Grady Show in the UK.

Has LV always been on your wish-list of roles to play?

Yes! When I was young growing up in New York, I always did impressions and loved singing many genres of music. My parents tell me I had a natural instinct for mimicry, especially when it came to Judy Garland in The Wizard of Oz. Also, for some reason I always gravitated toward British comedy and one of my favourite things in the world to watch was Absolutely Fabulous. I especially loved Jane Horrocks in it. Later on, my father saw a review of the film Little Voice – starring Jane - and given LV’s love for Judy and all the diva impressions, he said we had to see it. I was blown away by Jane Horrocks’ performance and of course, by the story itself. I became a little obsessed with it!

What lead to you finally realising your dream of performing in it?

Cut to when I was doing the show Forbidden Broadway, Off-Broadway, in 2008. I was doing impressions in public for the first time and gratefully being well-reviewed for doing so. It put me on the map as an impressionist and over the next few years I pushed myself to try more and more impressions and to eventually build my own show – both because I was enjoying it and because I realized there was an audience for this sort of act. It was around this time I posted some impressions videos on YouTube and they started racking up some views. In the summer of 2012, I remember seeing a notice that Little Voice was going on tour in the UK and was being directed by its author Jim Cartwright. I’d never seen the show on stage before so my husband and I planned a six-day trip to London...with my ulterior motive being to take a train to Guildford to see the show! My managers at the time suggested ‘Why don’t you write to Jim, introduce yourself and tell him how much you love the show?’

Yes and he wrote back saying ‘I’ve just watched your stuff online. You’re fabulous! Come to the stage door and we’ll chat!’ I ended up sitting down with Jim and talking about the show for quite some time. We stayed in touch and soon after, when some of my YouTube videos went viral and I had a run of sold out shows at The Hippodrome, Jim came and said ‘we have to make LV happen for you!’ That was in 2013. So as you can see, doing this show has been a very long journey! Now, to finally get to do it, on this grand scale, with this incredible cast, is just thrilling!

You’re famous for your spot-on diva impersonations. Which ones will you be doing in the show?

Well everyone probably expects me to come out and do Celine Dion but it’s not the right time period! What I will be doing though, is attempting Cilla Black for the first time in my life. Everybody I impersonate in the show will be of the classic musical era LV’s father loved. Garland, Piaf, Bassey, etc.

What challenges does the role present?

Honestly, the biggest challenge will be playing an introvert. I’ve recently played Fanny Brice in Funny Girl and everyone says that’s one of the most challenging roles of all time, and I don’t disagree. You never leave the stage except to change costume, you sing 12 songs, laugh, cry, dance and do physical comedy – the list goes on! But I can safely say I’m more nervous about doing Little Voice because I’m not an introvert. I’m very loud and outgoing by nature so it’s going to take a lot more work for me to tap into that quiet and timid side of the character and of myself. I also want to be fully memorized when I get into the rehearsal room. I want to be as comfortable with the text as possible, in order to be fully comfortable performing it in a Northern accent. Sure, I’m good at accents but it’s a very different thing when you’re doing an accent in the place where that accent actually comes from! I’m not doing this show in New York. I’m doing a Lancashire accent for people in Lancashire. That’s very intimidating!

When you are doing a new diva, how do you set about mastering them?

It depends on the particular vocalist but typically I immerse myself with them for a couple of days. I listen to lots of their music before I watch any video footage of them. I like to get the essence of their voice first. Then I study their physicality in more detail. I try to take on as many mannerisms, characteristics and facial expressions as I can.

This is your first time touring the UK in a play. What are you most looking forward to about that?

I’ve always been a huge fan of the UK and British culture. When I’ve toured here with my own concerts, I have seen different parts of the country but I’ve only been in each city for a night or two. Whereas on this tour, I’ll thankfully have more time to really explore these towns and cities, so I&#39;mlooking forward to that.

How do audiences differ on either side of the pond?

I think Americans kind of watch you, leaning back, giving off an ‘entertain me’ vibe. I feel a British audience leans forward a bit more. They come into you and your world. Both are great and I’m not trying to insult my home country but I do feel British audiences are a little more appreciative. On the other side of that, Americans are much more likely to leap to their feet at the end of the show! Over here you can give the best performance of your life and the audience cheers like crazy but they don’t always leap to their feet. It’ll be interesting to see the reaction to this play. It won the Olivier Award for Best Comedy but I personally don’t see it as a traditional comedy. I see it as a true drama that happens to have a lot of comedic moments - and I know Jim and our director Bronagh Lagan are really looking to bring out the heart at the centre of it. How people are imperfect, make mistakes and have rises and falls - but they persevere. Fear of ‘starting over’ is a big theme in the show and I think we can safely we’re all having to start over now in many ways. On both sides of the pond, and all over the world. It’s very timely.

The legendary clip of you doing Total Eclipse of the Heart shows the incredible array of people you can impersonate. Have you subsequently met any of them or had any feedback from them?

The comedian Kathy Griffin saw a video tweet I posted of me doing her reading a line from Clueless. She retweeted it and wrote ‘Perfection!’ Then there’s Bernadette Peters who said in an interview with Attitude magazine that I did one of the most incredible impressions of her she’d ever heard. It was amazing that she even knew who I was! I also have a lot of mutual friends with Kristin Chenoweth and over the years, she’d tweeted and posted about me, so I knew she was an admirer of what I did. I’d never met her though until we both performed at the same gala. The event producers thought it might not be best to do my Kristin impression, in case it rubbed anyone the wrong way. So I didn’t include her impression in my set. Afterward, Kristin sees me backstage, grabs me by the shoulder and says ‘Hey! Why didn’t you dome? Next time, you do me and you show all these people what we’ve got!’ And that’s what you want! For someone to know you’re doing an impression with love and respect. Sure, some have to be more exaggerated than others, but they should all come from that same place of admiration.

Times have been tough for theatre and theatregoers. What do you hope audiences will takeaway from seeing Little Voice?

First of all, I think this play is a true love letter to the UK. It celebrates so many great British artists and their music. But the story itself is something everybody can relate to, regardless of whether or not they know the music in the play. The idea that no matter how difficult things get, you can still persevere and rise from the ashes. And I think that’s exactly the message we need after the last two years. It’s a story about not being afraid to try something different and starting again. We’ve all been through something together that has changed us, just as the characters in the play do. And hopefully, the audiences will embrace me as an American performer, taking on such an iconic British character. I’d like to think that I’ve earned some stripes working in the UK quite a bit already, so maybe that will help. And I’ve actually just become a resident, along with my husband and our dog Jeff Vader. We all live here now. So, you’re stuck with me!

Does performing in Liverpool have any special significance for you?

Liverpool is one those places I’ve dreamed of going my whole life. My British friends say ‘Liverpool? Really?’ and I always say: ‘You don’t know what Liverpool means to an American! ’It’s musically historic! To say you’ve performed there is amazing as well as getting to visit all the iconic places I’ve heard so much about. It’s the icing on the cake with this tour!