Things Hidden Since the Foundation of the World - HOME 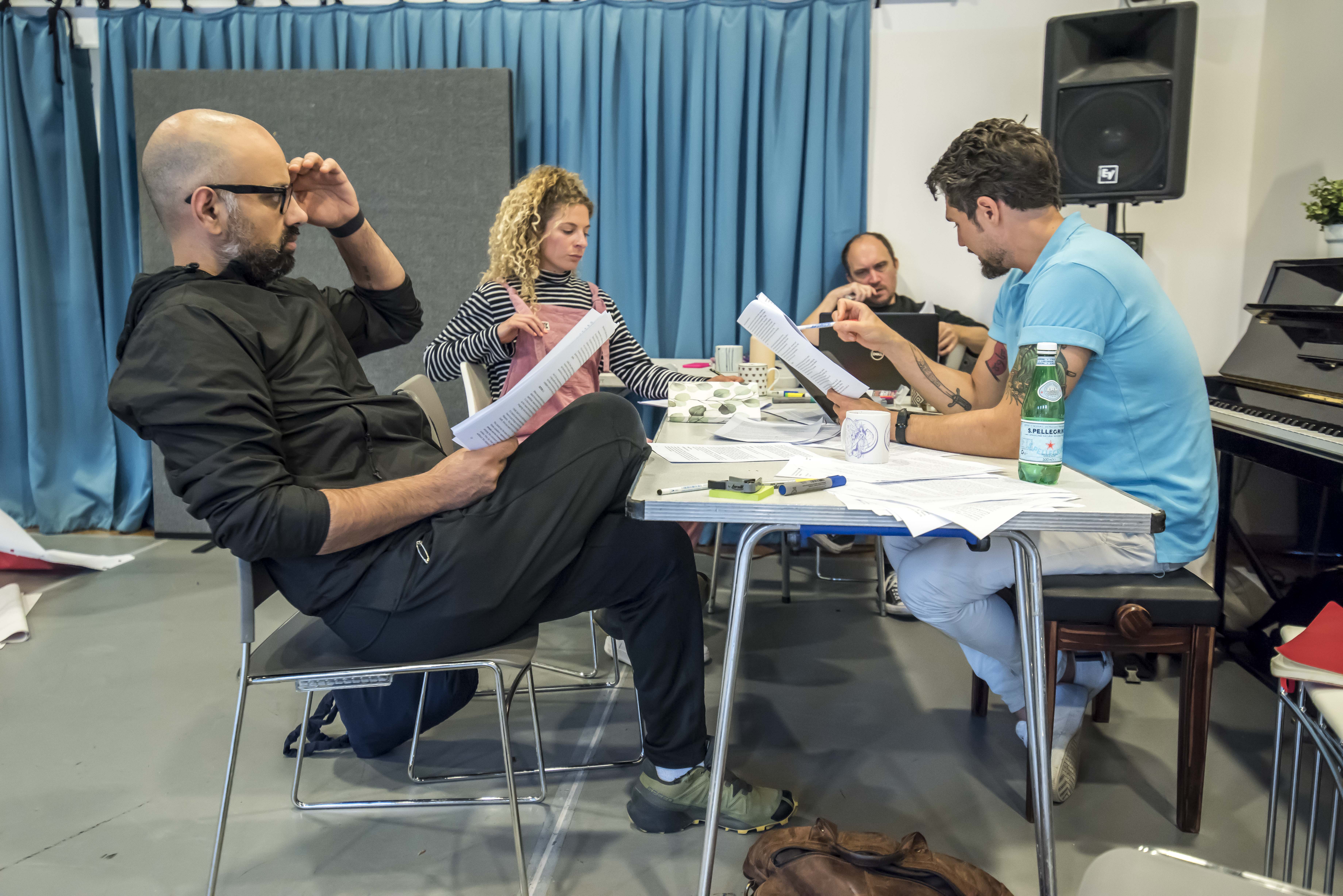 Things Hidden Since the Foundation of the World is a kaleidoscopic theatrical investigation into the unsolved murder of legendary Iranian singer, Tom Jones-esque showman and sex-symbol, Fereydoun Farrokhzad, by writer and director, Javaad Alipoor. Performed by Javaad Alipoor and Asha Reid with Raam Emami, it's world premiere is happening right now at HOME (22 October to 5 November) before a London run at Battersea Arts Centre (9 to 26 November).

Things Hidden… is the final part of a trilogy of plays – after The Believers Are But Brothers and Rich Kids: A History of Shopping Malls in Tehran – that interrogate how modern technology shapes our political ideas and identities. Written by Javaad Alipoor with Chris Thorpe and co-created by Natalie Diddams, Things Hidden…takes a thrilling ride through the rabbit hole of the internet via Wikipedia and murder mystery podcasts to examine a clutch of competing theories about the final days of a charismatic entertainer murdered in exile.

In the mid 1970s Fereydoun Farrokhzad was at the height of his fame. The much-loved tuxedo-clad showman was a regular fixture on Iranian TV and radio attracting record-breaking audiences of all ages. Alongside his own successes as a singer Farrokhzad hosted the weekly TV variety show, “Mikhak-eNoghrei" (Silver Carnation), which helped propel countless performers to stardom. Forced to flee his homeland after the 1979 Revolution, Farrokhzad settled in Germany but continued to perform to his adoring fans from afar selling out vast venues like the Royal Albert Hall. Though he had frequently challenged taboos and conservatism within Iranian society during his broadcast career in Tehran, in exile Farrokhzad’s position hardened and he became a scathing critic of the regime. On 7 August 1992, he was found brutally murdered in his small flat in Bonn. The neighbours said his dogs had been barking for two nights; the German police never solved the case.

Writer, director and performer, Javaad Alipoor: “When I started researching the story of Fereydoun Farrokhzad, I came to realise that his murder is the beginning of a series of events that still haunt us today. As the relationship between the Global North and the Global South has shifted, so too has the old sense of the West as a safe place where dissidents can escape to. Put simply, you might leave the dictatorship, but the dictatorship won’t leave you. Things Hidden Since the Foundation of the World is the final part of a trilogy of plays that I began writing in 2017. I knew I wanted this last part to stand alone whilst speaking to the relationship between politics and technology, history and the present that has been the thread connecting all three plays. Retelling and trying to understand how to retell this story has helped me find a way to do that and to really confront what it means to think of the world as something like the internet, research as a kind of deep dive and communication as a kind of network.”

Javaad Alipoor is a British-Iranian, Manchester-based and Bradford-built artist, writer, performer and Artistic Director of The Javaad Alipoor Company. He wrote, directed and performed in The Believers Are But Brothers for the stage and for BBC Four; Rich Kids: A History of Shopping Malls, co-created with Kirsty Housley, for the stage and for its digital world tour which included a run at the prestigious Sundance Film Festival; and together with Chris Thorpe he wrote and directed the tri-lingual theatre production, Made of Mannheim, which had its world premiere at National theater Mannheim and Theaterhaus G7. Javaad was Resident Associate Director at Sheffield Theatres from 2017-18 where he directed Dale Wasserman's 1963 play, One Flew Over the Cuckoo's Nest. Prior to this he was Associate Director at Bradford’s Theatre in the Mill from 2015 to 2017.

Raam Emami is an Iranian/Canadian musician. He started his musical career as the founding singer/songwriter of Hypernova, a post-punk band which was born in the undergrounds of Tehran in the early 2000's, before pursuing a solo career under the pseudonym, King Raam. Raam is the son of the prominent professor and environmentalist, Kavous Seyed Emami, who was arrested in 2018 on false charges of espionage and imprisoned in Iran’s notorious Evin prison, where he later died in suspicious circumstances. Since then Raam has lived in political exile in Canada where he uses music and advocacy to bring global attention to those persecuted by the regime. His taboo-smashing podcast, “Masty o Rasty” (The Drunken Truth) is a huge hit with listeners and has been streamed more than 20 million times.

For tickets and further info on HOME, click HERE