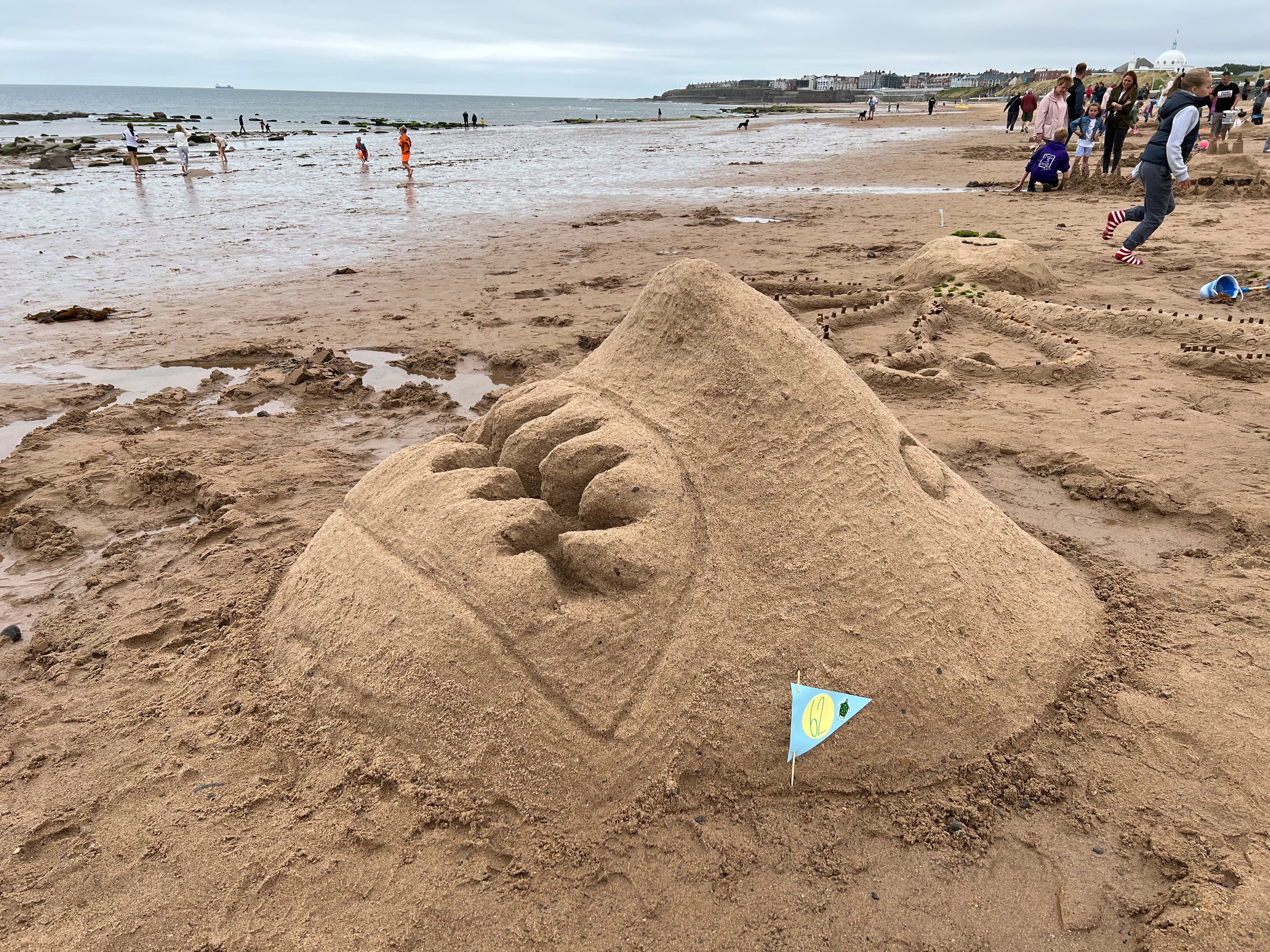 A rainy start in North Tyneside on Sunday could not dampen the spirits of 150 teams of Sandcastle builders, who took up positions on the beach in front of the famous Rendezvous Café: to take part in the 15th Whitley Bay Sandcastle Competition.

The free competition is an annual event organised by Whitley Bay Chamber of Trade – and supported by North Tyneside Council: and it quickly became clear as Mag North met the teams, that it’s one day of the year that cannot be missed.

On an idyllic stretch of beach, with St Mary’s Lighthouse to the north and Tynemouth Priory away to the south, the scene was set for some good-natured competition: as teams from Manchester, Cardiff and Wilmslow joined locals to craft their sedimentary masterpieces.

There are two distinct categories to enter: either the traditional ‘Sandcastle’, or the ‘Sand Sculpture’ section. The quality on display from both was incredible.

I first met 4-year-old Arthur, who along with a bit of input from his dad Richard, had created the most amazing ‘Minion’, while other family members enjoyed a perfect picnic.

Eli (5) and Noah (8) – and grown-up helper Joe (37) had created a castle which may well have been an exact replica of an Aztec Temple. I asked Joe if he was an architect? “No – an engineer” was the reply. (Who knew?!)

Amelie, Charlie, Josie and Ellie (6,4,4 and 7) had unearthed a giant sea turtle, which looked every bit as though she was just emerging from laying her clutch of eggs. Mum Helen tried to play-down how fantastic their build was, but the widest grin on her face suggested she was feeling pretty chuffed!

Next came an incredibly detailed warship named HMS Flicker, not built down the road at Swan Hunters, but right here on the beach by Noah and his dad.

Near the waterline was Matilda, who was standing alone, guarding a huge, emerging ‘Jaws’, which was terrific and terrifying in equal measure. When asked if it was all her own work, this South Shields GP claimed that she’d been assisted by her son Matthias. I asked where he was and she gestured vaguely towards the crowds. I think Matilda might just be one of those ‘Guerrilla Clinicians’ that does amazing stuff – in the most unlikely places – as an antidote to the incredibly important day job. Whatever was going on…she was not leaving that shark to search for any lost child!

Barnaby 13, his brother Sam 10 and Mum Alison along with friends, had created the most exquisite Octopus, complete with extending tentacles sporting hundreds of ‘suckers’ fashioned from slices of seaweed. There’d clearly been some practicing done before the big day – and a recent break in Robin Hood’s Bay might well have been the location for a ‘dry run’.

We all agreed that as a publisher of important news, if they didn’t win – then Mag North would definitely write an article about injustice.

Every one of the teams I met, was having a wonderful time – and didn’t seem to be thinking too much about taking a trophy home. Then there was Peter and Darren.

Reclining casually against the sea wall, in front of a technically exact Formula One racing car, complete with operational headlights – and a drivers helmet, the father-in-law and son team, supported by five-year-old Jackson and mum Angela, clearly felt their work was done.

They attend every year and had previously won the competition with a ‘Herbie’ VW Beetle. A local family: they were clear about how important the event is to the community and to the region. “The fact it’s free to enter too, is really important” explained Angela – an NHS Eating Disorder Specialist who had changed her working pattern to ensure she was on the beach on Sunday. “Jackson was awake at 6am this morning, asking me to put his sun cream on!” It’s obvious sandcastle day means a lot to them all.

At this juncture I was worried the mood could change – and there may be some civil unrest, so I positioned myself on the Prom close to Malcolm Henderson from North Tyneside Council, who I was confident could look after us both, if the results upset anyone.

But of course as with the entire day, only celebration, fun – and a few-thousand cubic metres of sand was kicked around on this particular stretch of majestic Northern coastline!

And so to the results: In the Sandcastle category, first prize was scooped by ‘The Amazing Sandcastle Builders’ with their epic fortress.

June, Debra, Scott, Malcolm and everyone involved with the day need a massive pat on the back, because their event not only succeeded in bringing people together, but also showed off the wealth of talent and opportunity in the North East – and reinforced what an amazing coastline we have in this part of the world.