Buy Nowt LS6 Headingley: Build It And They Will Come

“People get that it makes economic and moral sense to make best use of the things we already have.” Mag North drops in on a 'Library of Things'
Colin Petch.
August 13, 2022 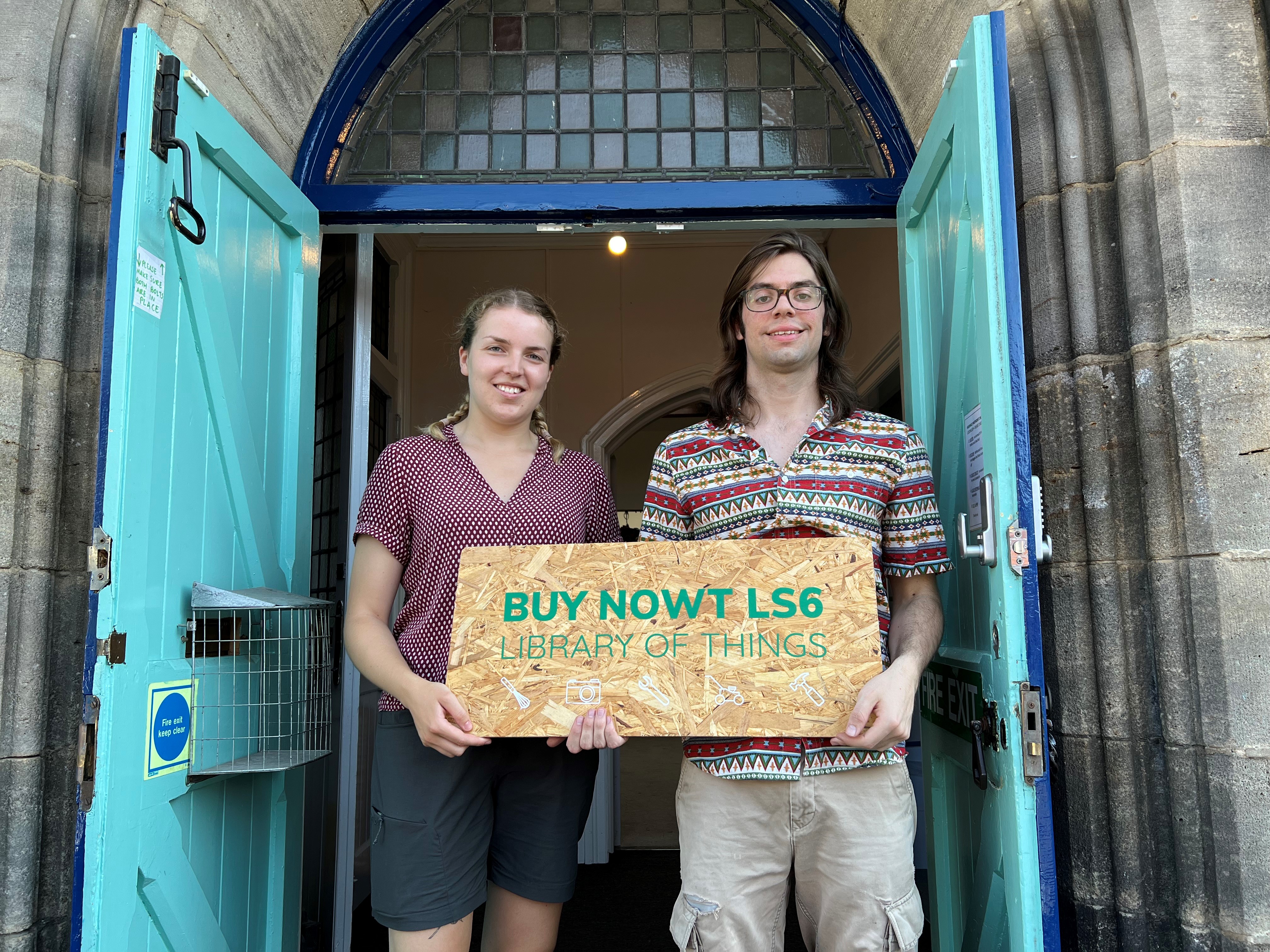 Chapel Street in Headingley, Leeds, is the home of a community organisation that for the last ten months has been bringing seismic change to their neighbourhood, their city and arguably the region.

‘Buy Nowt LS6’ is a 'Library of Things' that in under a year, has created a movement that’s building capacity, saves people huge sums of money, tackles the climate crisis in a direct and tangible way, and is developing life-improving – and potentially life-saving partnerships with statutory and third sector bodies. In the words of one of the founders Jed Aitchison: “We democratise resources, like a book library democratised information.”

So what is a ‘Library of Things’ – and how did Leeds get one? While there is no national umbrella organisation supplying a template to establish these vital resources, there is a growing network of libraries across the UK. The first was in Edinburgh: The Tool Library and across Scotland they were early adopters of the idea.

Jed – originally from Quebec explains: “We’re not the first one. I just copy other people.

“It’s a really simple game: you just get as much stuff as you can that you think people will want to borrow – and get as many people as you can to borrow it – and that’s how you make a successful library!”

Currently the concept is still in its infancy: 2 or 3 libraries are opening each year, with the Leeds site being one of the youngest.

I ask: did you see a library in Scotland – and think ‘we need one in Leeds’?

“It was literally like the Road to Damascus. The light bulb moment. I asked myself why there weren’t more?”.

At the time of my visit, Jed is working with Vanessa – another volunteer, who like her colleague is also clear how community members can tackle inequality and disadvantage while protecting the environment in a very real way.

From Munster in Germany, Vanessa is a PhD researcher, working on ‘Fairness in Transport Decarbonisation’ – and like Jed, it was the academic institutions that first brought them to the city that they’re now vital components of. Jed completed a PGCE, before becoming a teacher.

In addition to these two bright stars, the core team consists of Librarians James, Katharina, Laura, Julian, Charlotte and Wiktoria – with John and Melba looking after I.T. and Steve responsible for repairs and maintenance of items. The group were ‘e-introduced’ by Rob from Zero Waste Leeds which is an advocacy and action organisation, working for zero waste in the city by 2030. That was only November 2020: This collective have made monumental progress since then.

As we are chatting, a highly motivated 19-year-old is diligently scrubbing away at a carpet shampooer. Rehan volunteers to improve his employability options. Jed explains that 6th Formers, Retirees, Academics and Professionals all volunteer at the library: “It’s a really nice variety of lifestyles, ages and skill sets that help out.

“We’ve not been doing it long, but we’ve had a fast growth, maybe because of the climate emergency – or the cost of living crisis, or the fact we’re in a large city. We have a huge user base to tap into – both for donations and borrowers.”

Before opening the doors to the public, there was a CIC (Community Interest Company) to create, grants to apply for, insurance to arrange and robust lending practices to get in place. The location is part of Headingley Methodist Church and the space – ‘The Centenary Room’ is perfect - until the Library bursts out onto the street. Which it will.

After a period of securing donations and effective publicity, Buy Nowt LS6 went live in October of 2021. Ten months ago this weekend.

“Things do go wrong occasionally – and we do our best to ameliorate.”

It would be unrealistic to expect a well-oiled machine at this stage, but what there is, is a Community Anchor that must be supported and protected. Organisations like the library, that are able to hold physical assets and are autonomous and independent of the statutory sector, are platforms allowing people to take control of their own lives. It’s abundantly clear that combining local and global aspirations is a significant motivation for both the staff – those that donate – and the borrowers.

Jed’s ‘buy-in’ to the facility and the philosophy is obvious: “What’s cool about the library – it’s a beautiful thing – because people have things that they don’t use very often – and people do want their things to be used more efficiently. No one wants something taking up space in their home doing nothing and knowing it could go to a better home and they could get it back anytime they need it, simply by the lending of it.

“People get that it makes economic sense and moral sense to make best use of the things we already have.”

What about the sectors of society that may need your services most – but are unwilling or unable to access them?

Jed counters: “We don’t just serve LS6. We serve all of Leeds. Chapeltown. Roundhay. Gipton. But Headingley is a great place to start [because of the relative affluence]. That’s how we can get so much stuff – then we can help people outside the immediate area who need it more because of the lack of affluence.”

You’re actively promoting yourselves in those communities?

“We talk to lots of the community centres all around Leeds. We talk to lots of Councillors, charities, third sector organisations and schools.” He references supplying kit for DofE (Duke of Edinburgh) expeditions for those who couldn’t go out and buy it.

“We throw a bunch of ideas at the wall – some stick and some don’t. Some communities are more receptive than others.” Jed is clear that there are challenges in working with some ‘hard-to-reach sectors.

Liverpool and York are two other cities in the north that have Libraries of Things. Hopefully there will be more in the not too distant future. There is a great need.

Jed: “People should use them. They’re a huge asset that can save people hundreds of pounds over a year. Communities can save thousands of pounds.

“…And if people want to start them up – they should talk to us about it.”

“We could certainly give them a few emails, a few pointers – because I love it.” Jed confirms. “We save people lots of money by saving them buying stuff. I’d love that to be double – why shouldn’t it?

“We facilitate wonderful activities – like we help people go camping who simply couldn’t have afforded to before.” (As we’re talking, a young Mum is booking out tents, roll mats and sleeping bags for just that.)

“We help with DIY when people move into their new homes. We have things for Film Nights for community organisations or individuals.

“These things could not have existed without a formalised lending library – these things aren’t possible regularly for lots of people.

“WE MAKE THINGS POSSIBLE. We do wonderful things here. And it works.” That isn’t a cynical marketing strapline from Jed Aitchison. He believes it to his core.

I ask how would he like to see the initiative develop in the next year?

“There’s no reason why we shouldn’t double in size again. Or make money so we can pay someone in the team. Acquire new stuff and Reinvest that profit. Do more and better basically. Get more stuff. Help more people. Advocate for ourselves in more organisations.”

The group are also about to launch an exciting project, to help people to retrofit DIY insulation. “We want to make it easier for people to fit their own insulation – and save money” explains Jed.

“We’re also going to lend out all of our dehumidifiers through the NHS in Leeds to people who have damp houses. Instead of getting sick and costing the tax payer more – we’re using preventative medicine.”

I ask if that’s a formal partnership they’ve established with the NHS?

“We’re in the process…the NHS would like to borrow our dehumidifiers – and give them to the people in Leeds who need them most. That’s literally what we’re here for.

“We want to do more of that – and find new connections I haven’t even heard of yet.”

I ask: are you actively promoting that, because winter will be here soon?

“It goes out next week. We have a web page…and the legal documentation ready to go. We’re working with community partners in Leeds, including Canopy Housing: Get the tools and training – and let the people do it.

“What we do at the library is democratise resources. A book library democratised information.

“It’s a no-brainer in my opinion. We have Book libraries– why don’t we have Thing libraries?

“There’s hopefully going to be more [libraries] as the climate emergency and the cost of living crisis becomes more readily apparent.

“And you don’t have to be from LS6 to be a member. Most members are from the city – but if people think its worth the journey – we’ll help.”

To finish, I ask if the group have a ‘wish list’? Are there particular items that are in demand?

The efforts of this group of Leeds-based volunteers cannot be overstated. While you or I may be motivated to access their service because we can't afford a hedge trimmer – or a barbecue, the real-world implications of working together – and sharing – are massive. And are what may just make the difference that’s urgently needed.